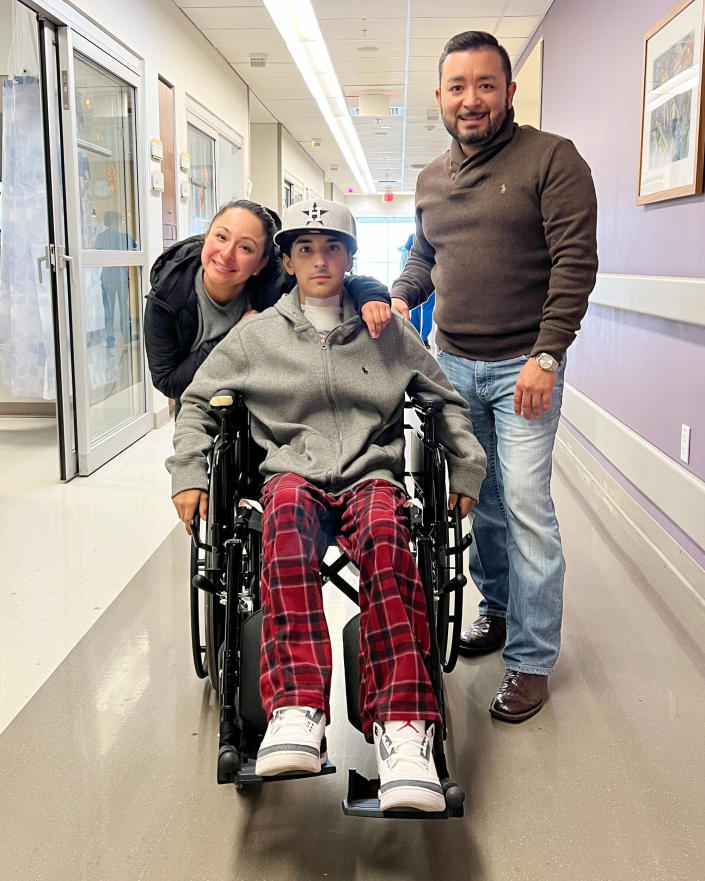 Erik Cantu, the 17-year-old boy who was shot by a San Antonio police officer in the parking lot of a McDonald’s, is back home after spending nearly two difficult months in the hospital, his family announced.

Cantu was placed on life support after the Oct. 2 shooting, in which he was shot multiple times by officer James Brennand, and “fought for his life” in subsequent weeks, his attorney Brian Powers previously said.

Cantu’s parents issued a statement on Wednesday saying he was released from the hospital just in time for Thanksgiving.

“Our family’s prayers have been answered and we are incredibly grateful to have our son Erik in our home. Erik still has a long road to recovery ahead of him, but we are thrilled with his progress over the past two weeks,” they said.

“It means a huge amount to us to be able to spend Thanksgiving as a family outside the hospital walls, where we’ve lived since Erik was horribly injured,” the statement continued. “We are thankful for the many blessings this week — Erik’s strength, everyone who supported us during Erik’s hospitalization, and the grace of God. Thank you.”

In the Oct. 2 shooting, Cantu was sitting in a maroon vehicle in the parking lot of a McDonald’s when Brennand, who was present at an unrelated disturbance call, opened the driver’s door and ordered him out, police said.

Police CCTV footage showed Cantu in the driver’s seat eating a hamburger and a 17-year-old girl in the passenger seat.

He reversed the car with the driver’s door still open and reversed. Captain Alyssa Campos, the police training commander, said in a video statement that the door hit Brennand.

Brennand then opened fire five times as the car backed up, the video showed. He fired five more shots as Cantu drove off. Cantu was found a block away with multiple gunshot wounds and was hospitalized, police said.

Police said Brennand approached Cantu’s car because he believed it had evaded him the day before when he attempted a traffic check. Campos said Brennand believed the car was stolen, a claim the family denies.

At the time of the shooting, Brennand had been on the force for seven months and was still on probation, standard practice for San Antonio officers who graduated from the police academy less than a year ago.

He was fired after the shooting, then arrested and charged with two counts of aggravated assault on October 11. He posted bail and was released.