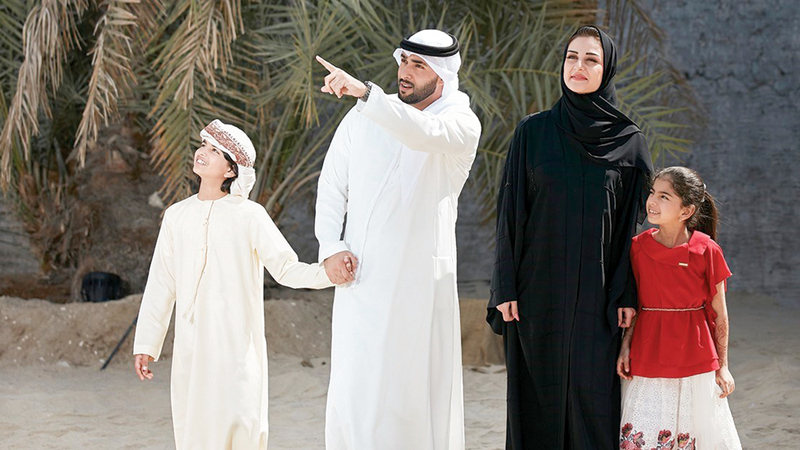 The Department of Community Development in Abu Dhabi confirmed that it has achieved qualitative achievements in the seven pillars of the social sector that it supervises, during the first three years of its establishment (2019-2021).

The housing system witnessed the provision of housing support to the citizens of the Emirate of Abu Dhabi with a total value of more than 40.6 billion dirhams, while the total social support for beneficiary families exceeded one billion dirhams, benefiting 11,789 families, licensing 18 places of worship for non-Muslims, and developing 28 initiatives to enhance the quality of family life. The licensing of about 3,800 volunteers and the opening of 20 community schools, in addition to the high rate of people of determination’s satisfaction with their quality of life, reaching 62%.

In detail, the head of the department, Dr. Mugheer Al-Khaili, confirmed that the department has become the voice of society in various priority social issues, so it worked on conducting special questionnaires to measure levels of “quality of life” and identify the main factors affecting it, and those questionnaires, in their three stages, reflected the satisfaction of citizens and residents On the levels of quality of life and well-being enjoyed by individuals in all walks of life. The specialized studies and research prepared by the department have also contributed to finding a clear roadmap on how to increase the satisfaction rates of citizens and residents with living and life in Abu Dhabi, and provide a decent standard of living for all.

For his part, the Undersecretary of the Department, Engineer Hamad Al Dhaheri, confirmed that “the social impact created by the Department is clear and in numbers” in the seven axes supervised by the Department, and focuses on developing the housing system, programs that enable families benefiting from social support, and programs and initiatives that enhance family cohesion and social integration. In addition to strengthening the national identity, community participation and volunteering, while creating an active and responsible society.

Al Dhaheri pointed out that these axes contributed to creating a spirit of cooperation and integration between the public and private sectors, as well as the third sector, to support the strategies and policies of the social sector agenda, which are closely linked with various other sectors, to achieve our aspirations in raising the standard of living for members of society and forming a cohesive family.

The department confirmed in the report “Social Sector Achievements” that activating the social support axis contributed to providing a package of financial services and achieving stability for families, especially during the pandemic period and beyond, in addition to working to empower them and involve them in specialized training programs to develop skills and spread awareness about financial culture. In order to improve the optimal management of families’ financial affairs, and as a result, 8% of social support beneficiaries were able during the past three years.

She revealed that the total social support for beneficiary families amounted to more than one billion dirhams during the past three years, and 11,789 families, including 79,606 individuals, benefited from this support. In addition, 587 beneficiaries of social support programs were empowered, and 331 were employed, to ensure financial independence and enhance the financial well-being of families and their families.

The department indicated that work has begun on a new housing strategy in the Emirate of Abu Dhabi through a comprehensive review of the current housing benefits in cooperation with the Abu Dhabi Housing Authority, and a proposal to provide a variety of new housing options that meet the needs of different groups and challenges of housing, including a set of initiatives and policies. Operations of the Housing Authority by providing customized products in an integrated residential community through partnerships with the private sector, benefiting from the available vacant stock, providing products dedicated to humanitarian and emergency cases, improving loan collection processes, launching a fund, in addition to launching housing savings.

The department stressed that the family cohesion axis contributed to the availability of care, protection and psychological support for families and the improvement of their quality of life with an increase of 13% in the quality time between members of the same family to reach 68.5%, in addition to continuing to enhance the quality of social care services provided to them, and integrated case management that focuses On the luxury of providing services and solutions to the whole family and meeting their needs by providing comprehensive services for various social issues, and raising society’s awareness of the importance of marital counseling during the first years of marriage to reduce the causes of divorce.

She pointed to her work on activating a set of initiatives of the Abu Dhabi Strategy for the Quality of Family Life, which includes approximately 28 initiatives that include reviewing legislation and creating policies, programs and services for families, youth and senior citizens in order to achieve and raise the quality of life in the Emirate of Abu Dhabi, with the participation of various relevant authorities.

The department stated that, following the launch of the Abu Dhabi Strategy for People of Determination, the social sector achieved many gains with a clear impact by integrating and employing people of determination, as 633 were employed during the past three years in various sectors, and this contributed to the availability of an appropriate environment that allows them equal access to rights and services. And opportunities in all fields, whether health or social care.

The social sector was also keen on providing the services required to protect the vulnerable groups, those most vulnerable to violence, to live in a better way, to enhance prevention and early detection of victims of violence. Programs and initiatives related to social integration also contributed to reducing the isolation of the elderly and enhancing psychological support for workers to integrate them into society.

The department indicated that it has developed an integrated policy for volunteering in order to organize work and create an efficient and effective volunteer environment within fixed standards that achieve access to an active and responsible society. With more than 438 million dirhams in financial contributions, and more than 600 million dirhams in in-kind contributions, pointing to the issuance of 10 initial approvals for civil institutions and associations of public interest to be announced by the Ministry of Community Development, licensing 3752 volunteers, and 16 specialized volunteers, in addition to 48 Volunteer under the age of 18, and the establishment of the Social Investment Fund to collect and invest the social contributions of individuals and institutions in order to achieve sustainable returns to finance projects and social initiatives.

The department indicated its keenness to inculcate and promote a healthy lifestyle for various segments of society, by integrating the elements of healthy modern life with sports and recreational activities, which contributed to the opening of 20 community schools within the emirate, which is concerned with benefiting from the sports facilities of government schools.

More than 72,000 community members have participated in its programmes. In addition, 85 community activities were carried out, 54,760 participants were registered, and the “Active Parks” initiative was implemented to encourage all segments of society to take advantage of public parks and green spaces to adopt an active and healthy lifestyle, implement a series of training campaigns and organize a number of programs targeting students, such as « Train with a star” and “Your weight is healthy.”

The Department of Community Development has handed over 18 houses of worship for non-Muslims, which are licensed to conduct their business, in accordance with the laws and regulations in force in the country. A guide to religions for non-Muslims has also been issued, and two rooms for multi-religious worship have been created, in the building of Abu Dhabi International Airport, and Cleveland Hospital, Abu Dhabi. Which allows everyone of different faiths to practice worship.

The department also put before it a plan to spread the initiative in the coming years in various places in the Emirate.

A dirham for social support.. 11,789 families benefited from it.