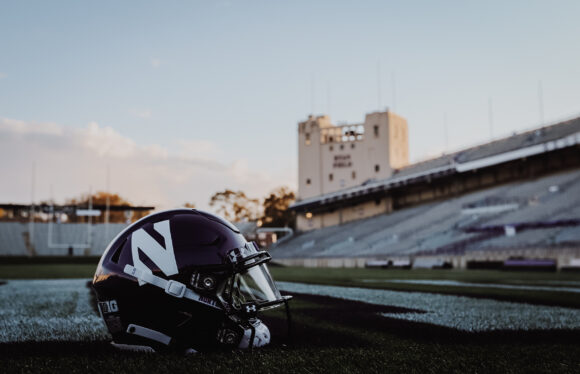 Ryans’ donation will support education and research initiatives in applied microeconomics, business, digital medicine, neuroscience and global health, as well as translational research at Northwestern University Feinberg School of Medicine and the redevelopment of Ryan Field.

Even before this last gift, the Ryan family were already the greatest benefactor in Northwestern history. Their philanthropic support has benefited fields across the University, including scientific research, faculty, academic programs, student access and achievement, the performing arts, and athletics.

Patrick G. Ryan graduated from Northwestern in 1959. He received his undergraduate degree in commerce from what was then called the School of Business and is now called the Kellogg School of Management. He also received an honorary degree from the University in 2009 in recognition of his 14 years of service as Chairman of the Board of Northwestern. In 2013, he was inducted into the Northwestern Track and Field Hall of Fame.

Patrick Ryan’s first business venture as a student was to sell scrapbooks to other students, which paid for his education in the Northwest. Ryan founded and served for 41 years as CEO of Aon Corp., one of the world’s leading insurance brokers. At the time of his retirement, Aon had annual revenue of nearly $ 8 billion with more than 500 offices in 120 countries.

Shirley Ryan is nationally recognized for her 40-year work to advance the innovative ability of the infant brain to learn motor steps. Two US presidents appointed her to the National Council on Disability. She co-founded and chaired Pathways Center, a multidisciplinary pediatric clinic, for 33 years. She also founded the Pathways Medical Roundtable to guide content for Pathways.org, which helps parents track and improve infant motor, sensory and communication milestones.

She also founded and directs Northwestern’s Learning for Life series in 1976 and is a founding member of the Northwestern Women’s Board.