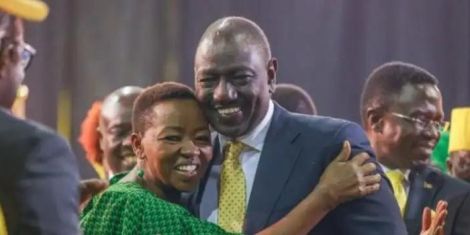 Considered one of the oldest institutions in the western region, the high school has produced notable history makers who have left an indelible mark on their fields.

First Lady Ruto attended Butere Girls High School for her O and A levels, but she’s not the only well-known name to come out of the prestigious national school.

President-elect William Ruto and Mama Rachel Ruto at a past event.

Lady Justice Joyce Aluoch is also an alumnus of the Kakamega-based school. Aluoch is known for rising as a district magistrate and becoming the first Kenyan judge at the International Criminal Court – the hallmark of her career. She was later elected the first vice president of the Hague Court.

Lady Justice Effie Owuor is considered a woman of many firsts. She was Kenya’s first Supreme Court judge and the first female judge of the Court of Appeals, which was the highest court at the time before the Supreme Court became operational. Justice Owuor has built a career spanning more than three decades.

What started as a teaching career for Prof. Florida Karani in 1969 at the University of Nairobi proved to be a historic undertaking. The lecturer would rise in rank and become deputy vice chancellor of the university – a position she held for ten years.

She became a full professor in 1996 and would later be appointed chancellor of Maseno University by the late President Mwai Kibaki. With the appointment, Karani became Kenya’s first female chancellor of a public university.

Another notable alumnus is, Mary OkelloKenya’s first female bank manager – a feat she achieved in 1977. She is also the founder of Makini schools.

In 1974, she became the first female MP from the Western Province to be elected to parliament after winning the Funyula constituency seat.

Elizabeth Masigathe first female permanent secretary of the Department of Education, is a distinguished alumnus of Butere Girls High School.

Masiga, a Strathmore University alumnus, is also the first female superintendent of schools

Former Taita Taveta Member of Parliament, Naomi Shaban had a 20-year parliamentary term that was broken in the August 9 poll by Wiper Party’s Bwire Akano. Shaban quit dentistry and turned to politics in 2002, where she secured Taita Taveta seat under the KANU ticket.

The high school was founded in 1916 by a missionary, Jane Chadwick to help students study reading, writing, and catechism. Over the years, Chadwick ran the school until it came second to Alliance Girls in 1957.

US FDA clears extra Moderna’s Covid booster due to shortage

US FDA clears extra Moderna’s Covid booster due to shortage