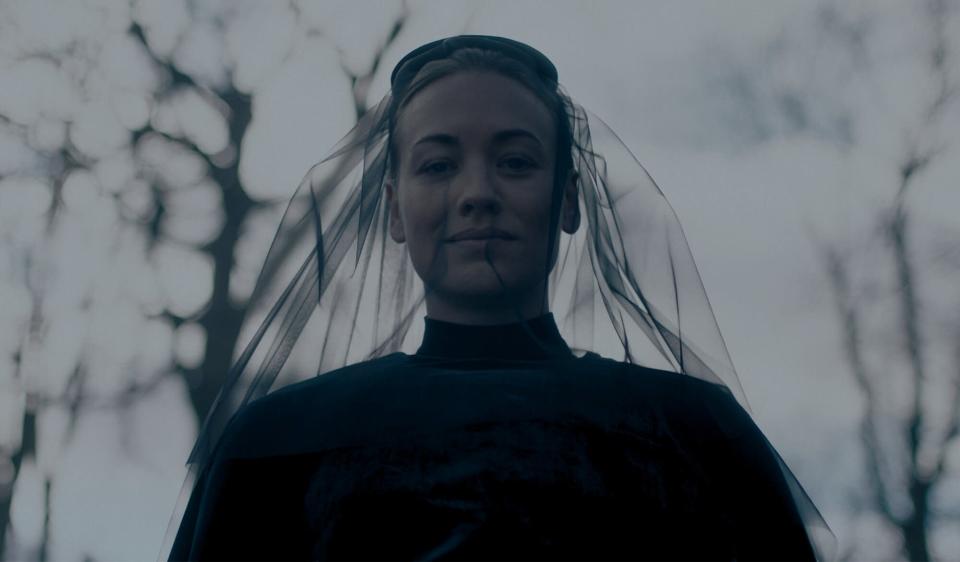 Praise be: Hulu has finally revealed the first look at The Handmaid’s Tale season 5.

The new photos, below, reveal a very disturbing image of Serena Waterford (Yvonne Strahovski), clearly in mourning attire, staring at the camera. Is she at her late husband Fred Waterford’s funeral, perhaps? The second image is a photo Handmaid’s Tale viewers have grown accustomed to: Elisabeth Moss’ June staring miserably at the camera.

At the end of season 4, June ultimately exacted revenge on the Waterfords by brokering a deal with Commander Lawrence (Bradley Whitford) for the release of 22 resistance women in exchange for Fred Waterford (Joseph Fiennes) returning to Gilead. Only, instead of bringing Fred back to Gilead, Lawrence – with the help of Nick (Max Minghella) – let him slip through their fingers and straight into the murderous clutches of June and her fellow maids. The women took turns beating him to death, and when we last saw Fred, his headless corpse hung on the wall, where misbehaved maids hung in previous seasons.

Hulu Elisabeth Moss as June Osborne in “The Handmaid’s Tale”

Not much was known about Season 5 before, but – blessed be the fruit! – Hulu also provided a synopsis for the new season. “June faces consequences for killing Commander Waterford while struggling to redefine her identity and purpose,” it read. “Widow Serena tries to make a name for herself in Toronto as Gilead’s influence seeps into Canada. Commander Lawrence works with Aunt Lydia as he tries to reform Gilead and rise to power. June, Luke and Moira battle Gilead from afar as they continue their mission to save and find Hannah.”

Madeline Brewer, who plays Janine (and found herself trapped in Gilead at the end of last season after splitting from June), previously told EW that the new episodes were “wild.” “I really don’t know how to describe it…I mean, we’re so out of Gilead,” she said. “And everyone is going through things they haven’t experienced yet. Everyone is going through a period of transformation.”

In addition to Moss, Whitford, Minghella, Strahovski and Brewer, the season will once again feature OT Fagbenle, Samira Wiley, Ann Dowd, Amanda Brugel and Sam Jaeger. It was previously announced that Alexis Bledel, who played the defiant servant girl Emily Malek for the first four seasons, was stepping away from the show for Season 5.

The critically acclaimed series will return on September 14 with two episodes. New episodes will air Wednesdays on Hulu.