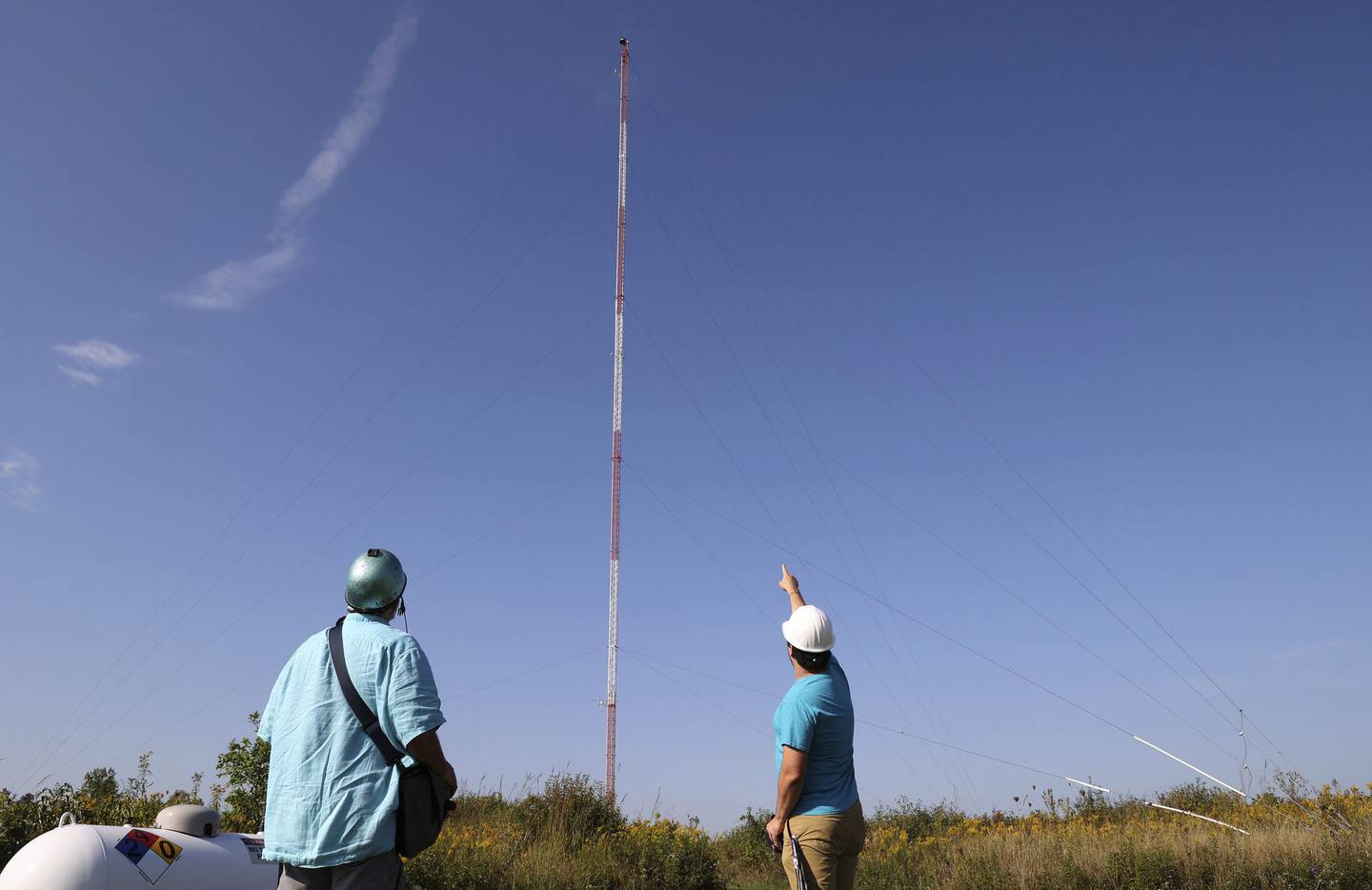 Next to a nearly 60-meter-high red-and-white striped tower in the Argonne National Laboratory is a building filled with newly opened boxes of instruments. These instruments measure climatic conditions such as air quality and precipitation, and compared to the laboratory’s historical instruments, such as the tower outside, they are small – very small.

That’s because instead of measuring the region’s atmospheric conditions from Argonne’s sprawling location in DuPage County, researchers will be using these tools in a different kind of lab — the city of Chicago. The data collected will be used in modeling to show the effects of climate at scales as small as individual neighborhoods, said Cristina Negri, the project’s director.

Argonne recently won a $25 million grant from the U.S. Department of Energy to set up an urban lab in Chicago called Community Research on Climate and Urban Science, or CROCUS. Researchers with the lab will develop data sets on Chicago’s climate by placing instruments throughout the city and collecting observations from the community.

Some of the effects of climate change, such as increasing flooding and urban heat, are known to disproportionately affect certain communities, especially those on the south and west sides of Chicago. The lab wants to quantify that, Negri said.

[ In extreme heat, trees can help cool neighborhoods. But a Tribune investigation found the city has planted more trees in wealthier, whiter areas ]

“It’s really to provide the data to show what the drivers are for this difference, and then how it manifests,” Negri said. “Until you know that, and you can prove it with data, it’s very hard to take action.”

What makes this operation unique, says Naomi Davis, founder and CEO of Blacks in Green, an environmental justice and economic development organization, is that community members have been involved in Argonne’s plans from the start. She said organizations in the black community are often contacted at the end of a process, after decisions have been made and the project has been designed.

See also  Is Vladimir Putin's 'partial' mobilization of the Ukraine war a step too far for the Russians?

“Those are approaches that have always been inappropriate that we reject,” Davis said. “So what was great about the Argonne approach is that they invited us to a process of designing a process.”

Surrounded by about 5 acres of prairie filled with yellow and violet wildflowers, researchers gathered at the Argonne test site on a recent blue weekday to troubleshoot some of the tools that will eventually be installed in Chicago.

There was palpable excitement when Paytsar Muradyan, an assistant atmosphere scientist, opened a crate.

Inside was an atmospheric lidar, which stands for Light Detection and Ranging. The machine sends a rapidly pulsed laser into the air to collect information about the composition of the air, including pollutants such as particulate matter emitted by industries and vehicles.

Several of these machines — as well as sensors for measuring temperature, soil composition, precipitation and more — will be linked to central computers to make the sensors autonomous, said Scott Collis, who leads the measurement strategy team. These computers will also use artificial intelligence and algorithms to detect patterns and ensure that the technology collects the best data regarding a city’s unique features, such as its impact of buildings on wind.

Where each device goes depends on several factors. One goal is to place these instruments at points where environmental conditions visibly change, such as the forest canopy in Hyde Park compared to West Woodlawn, Collis said. By measuring at these points, the lab’s simulations can determine the scale of the difference.

However, the most important factor in determining the location of the instrument is the input of community members, he said.

The effort includes more than 10 academic partners and four community partners: the Puerto Rican Agenda of Humboldt Park, Blacks in Green in West Woodlawn, the Greater Chatham Initiative and the Metropolitan Mayors Caucus.

“The scientific questions we’re going to ask will be very knowledgeable through very in-depth conversations we’ll have with the community,” Negri said.

Jessie Fuentes, co-chair of Chicago’s Puerto Rican Agenda, said Argonne has provided the organization with information about the specific climate concerns of Chicago. Humboldt Park, such as rising heat, lack of green space, and increasing flooding, as well as Puerto Rico. “That struck a very personal chord with many of us involved in Hurricane Maria,” Fuentes said.

The Puerto Rican Agenda led relief efforts for Hurricane Maria in 2017 and is again calling for action after Hurricane Fiona hit Puerto Rico this week, leaving the island without power.

Fuentes hopes this project can provide a model for how climate solutions should be culturally relevant to the people directly affected by the problem.

“This really puts an end to the one-size-fits-all model,” Fuentes said.

Davis said she is looking for where this information could take her community in West Woodlawn.

“One of the things that African American communities are sick and tired of is being studied — we’ve had institutions over the centuries studying us, but our lot never improves,” she said. “So what the rest of the story is about is how we use the data we get and put it to work for the health, wealth and benefit of black communities.”

Collis described the working of the lab as cyclical. Communities will provide input on areas of interest, such as spots with flooding or significant weather sensitivity, which will feed where researchers collect observations in the city. These observations will be used for the lab’s climate simulations and will provide more detailed, scalable images of what climate change looks like.

The lab will provide open data sets for other agencies, organizations and researchers to use in their work, as well as websites for the public.

One of the most important measures of success is ensuring that this data can support individuals and organizations in their work, Collis said. For example, if an organization advocates greenery in a certain area, Collis hopes that the lab’s data can provide that group with useful metrics.

The lab will also leverage citizen science so that community members can collect data points themselves. For example, handheld air quality monitors, which resemble green walkie-talkies, allow people to get information about the air around them by connecting to a mobile app via Bluetooth.

While the hand tools aren’t as accurate as some of the more expensive technology, they can reveal notable differences in air quality from one area compared to another, Collis said. And even this more simplistic technology will calibrate with the Argonne system.

According to community members’ suggestions, the lab hopes to get these palm-sized sensors into the hands of interested parties, including schoolchildren, so they can measure environmental factors on their blocks and in their backyards.

“This is a new paradigm for doing science,” Collis said. “And it feels good.”