A pleasant pandemic in Normandy: the creative French country prints of David Hockney 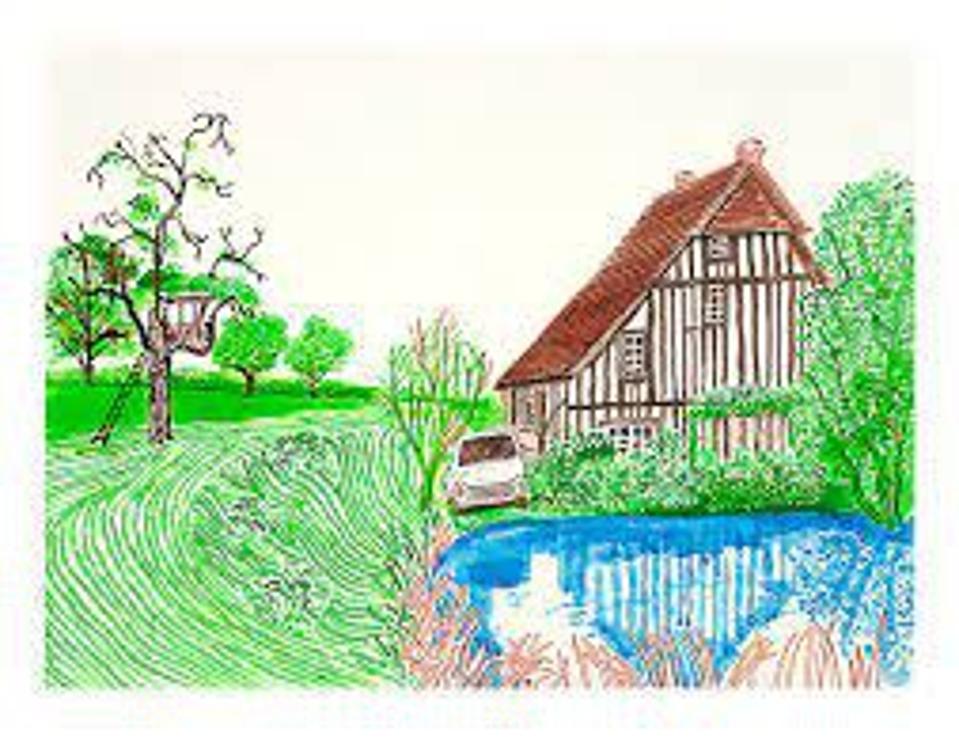 LA Louver Gallery in Venice, California, celebrating its 45th anniversarye year, has a new exhibit that you can actually go and see by appointment, “David Hockney: My Normandy.” I could say that seeing an art show in person, and seeing the joy with which Hockney in the ’80s created his work, was to me a hit in the arm – or, maybe more accurately, two hits in the arm. arms make it a pleasure to see the exhibition.

READ  Who can visit Scandinavia in April 2021?
READ  Ibrahima Konate insists he is fully focused on France despite Liverpool transfer interest

In March 2019, David Hockney took a house in Normandy, France. According to press documents, Hockney was drawn to the Normandy countryside by its picturesque countryside as well as the Bayeux tapestries on the 11the Masterpiece of the century of narrative art.

“My Normandy” features sixteen recent prints, eleven of which are laser prints from original designs, three are Ipad prints and two are 40ft long frieze prints on over 20 sheets of paper across a wall of paper. the LA Louver gallery. Most of them are offered in editions of 35 (the frieze is an edition of 15) at prices that the gallery will be happy to share with you.

The images are mainly of the 17e Traditional Norman half-timbered house of the century and barn where Hockney crouched. The images are the high-art version of a Zillow listing, with ink drawings of the house, north, south, east and west, front and back, with a changing set of parked cars. in the driveway.

The images convey the pastoral beauty of Normandy. It is proof of Hockney’s great talent that these landscapes read very differently from his earlier works of the English countryside and place us in a France of restored country houses and village life.

In these prints, Hockney draws both precisely and with great freedom: the perspective bends in Hockney’s direction, the aisles are rendered in dots and the surrounding greenery with impressionist brushes and dashes.

As I looked at the exhibit, taking a close look at Hockney’s new work sparked all kinds of associations: there was something about the house’s outdoor designs and the joy they convey that reminded me of Matisse’s first experiences with pointillism and neo-impressionism in Collioure. (a seaside town in the south of France near the Spanish border).

Matisse was born in the gray industrial north of France, and so when he came to paint in the south of France his work was steeped in delight in the beautiful light and soothing landscape. I imagine the same is true of Hockney, born in Bradford, herself an industrial town in the North. Hockney, like Matisse before him, reveled in the light whether it was California or Normandy.

Hockney draws the house on all sides, including the driveway to it. There is a freestanding impression of a hawthorn bush in front of a very old, dying pear tree that is absolutely stunning (and probably the impression I would most like to step out of the exhibit with).

The house in all its perspectives is rendered in two frieze works 12 meters long, Around the house Winter, and Around the Maison Ete – a 360 ° panorama of the house in winter and spring. Of course, looking at a landscape along a wall, I couldn’t help but compare it to Hockney’s iconic 1986 work, Pearblossom Highway.

Pearblossom Highway was a collage of 700 photographic images assembled in a way that shattered perspective while still being immersive. These frieze designs are the work of an older – more experimental artist. Pearblossom Highway argues that different perspectives are equal. In the prints Around the House, different perspectives exist, but in a sense they are all by Hockney. While the different perspectives Pear blossom jostle on the highway, around, they exist harmoniously around a house, telling the passage of time while the house remains unchanging. This shift from the personal to the recognition of the passage of time, is a topic Hockney touches on in other works, but here it sounds like a commentary on the time we live in and the time Hockney himself watches go by.

In exhibition, it is difficult not to be charmed by “Panorama of Beuvron-en-Auge” a single print, Grandma Moses-esque naive representation of the center of the French village which is like a master class to evoke the roads, the paths, buildings, trees and surrounding countryside of this Norman village. There is something healthy and heartwarming about the harmonious design.

Among the iPad prints are two images of the fireplace in her house – one with a roaring fire and the other dark, cold, with exhausted embers. I was probably reading too much but they seemed to me to be perfect metaphors both for old age (Hockney is 80) and the creativity that still rages in him, always playful, always inventive.

Likewise, I was particularly seduced by a series of 4 drawings made in Hockney’s studio. At the Studio, Ruby Dreaming (Ruby being a dog in the studio), Ink Test and Spilled Ink, use the colors of the late Matisse, but have the energy of the abstract works of Arhile Gorky (or even Keith Haring!), And finally they are overflowing with the pleasure of creation found in Picasso’s late work). Obviously, the paint shop remains Hockney’s “Happy Place”. Ruby seems to be dreaming of a Chagall-style sky and various trees (that’s the other imprint I would be happy to have in my home).

The charm of these works, and the expression of Hockney’s boundless creativity, is the perfect tonic for the dreary last year. Seeing art in person, even masked, will fill your heart with optimism. Seeing “My Normandy” by Hockney at LA Louver may even bring you joy. It did, for me.