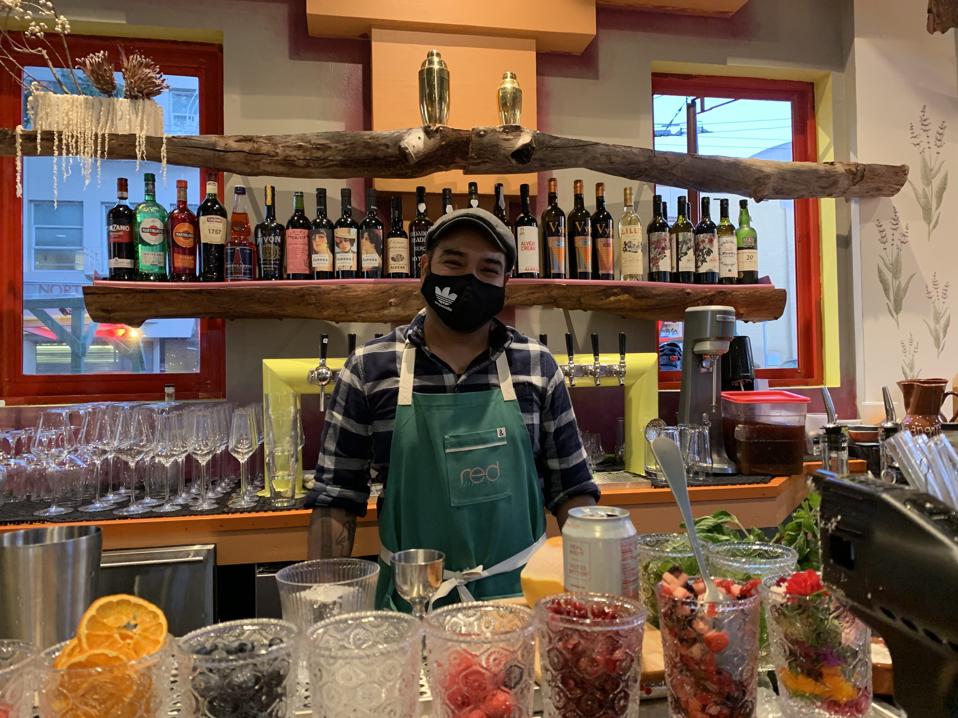 As the world begins to open up, there are some exciting new dining options in San Francisco’s North Beach neighborhood, the first of which is Red Window, a fantastic spot for classic Spanish small plates (with an elegant touch of California) and low-resistance cocktails, a trend that is likely to catch on this year.

The chef behind the concept is Adam Rosenblum, former Deputy Chef of Flour + Water, with a resume that also includes time spent at the famous Herbsaint in New Orleans alongside James Beard Award winner Donald Link.

His partner in this business is the incredibly creative mixologist Elmer Mejicanos, most recently from Tony’s Pizza Napoletana and a master of his craft, whom I met on opening night. His exuberance at the thought of being back behind the bar was palpable, and his cocktail menu will prove popular with people passing through for drinks and tapas or sitting down for a full meal.

The food menu is divided into three sections: pintxos (simple bites) tapas (small plates designed for sharing – although some of them are quite substantial – and postres. The pintxos section is divided into sections for croquetas, crostini and kebabs. .

We sampled a large portion of the menu, starting with several deliciously fried bites, crispy veal and beef meatballs, classic baccalao (salt cod fritters and potato fritters) and mushrooms with a cheese cream.

You can go in all directions with Mejicanos’ cocktail menu, cleverly curated around the themes of sour, spritz, high ball, tiki, artisan sangria, and bar cart. As much as I enjoyed seeing the cart rolling down Colombus Street with waiters mixing sherry cocktails at the table, so much I was all about the tiki section, starting with “Sucker Punch”, a smoked Martini mix & Rossi Fiero, Rosemary, Lime, Bitters, and Homemade POG, a description that brought me to POG. And there’s a table element to this drink too – a rosemary smoke bubble (more visual than taste) that adds an element of enjoyment.

Then we tried the “Gilda” skewers of green peppers, olives and white anchovies, as well as the magnificent patatas bravas, a complex version of the classic dish, with layer after layer of thin mandolin-sliced ​​potatoes. . And, of course, we had the Iberian ham, three years old, which is a must.

My cocktail for this tour, staying in the Tahiti of my mind, was the Baycation, more like a mai tai than anything else I can compare it to, along with Madeira, PX, pineapple, orgeat, lemon curd, nutmeg, bitters and Dole whip – a good sweet ballast for savory kebabs.

Although we were already full we had to order the ‘brothy rice’, much like a soup paella, with squid, shrimp, peas and chorizo, a dish that I studied for the possibility of try to cook at home. On the one hand, it seemed more forgiving than paella, but on the other hand, it was obviously a feat to cook all the different elements perfectly.

While the Catalan creme was delivered to almost every table, we were too drunk to try it. But appearances looked very promising.

Even though Red Window has just opened, the servers have already hit their mark, very aware of COVID hospitality and security.