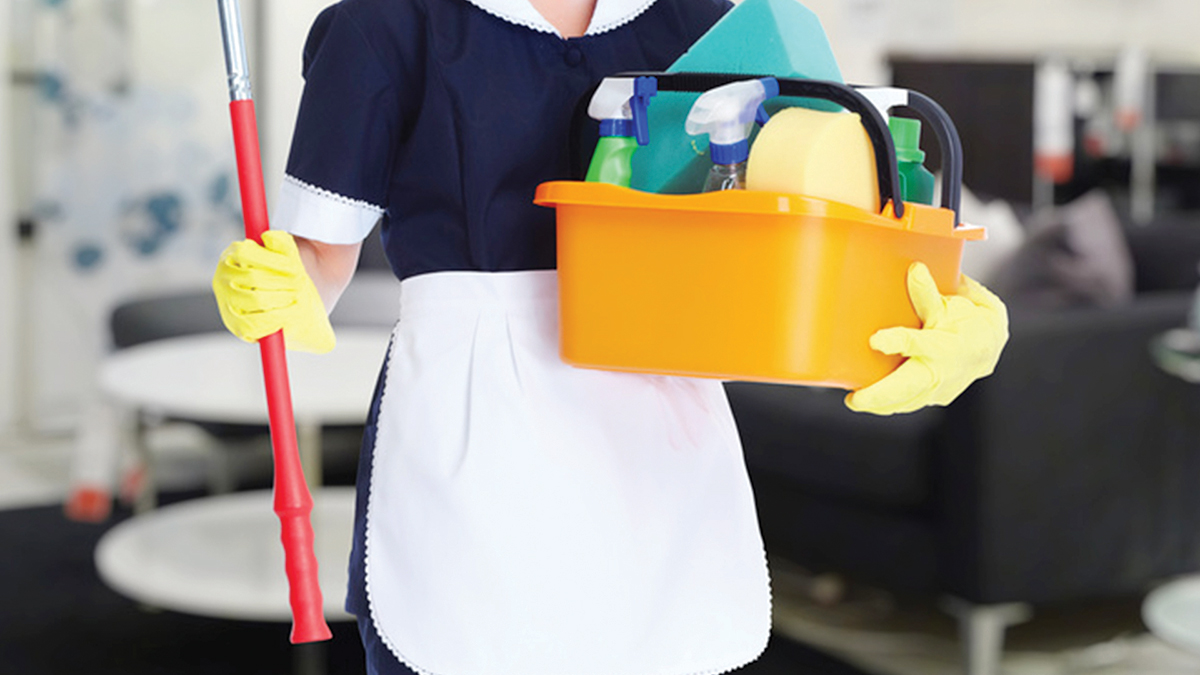 Unlicensed accounts on social media took advantage of the high cost of bringing domestic helpers through their recruitment agencies, in addition to the long waiting period. By publishing advertisements offering to provide labor in record time, selecting them through video clips at lower prices, and attaching their offer with false identification documents for workers similar to office contracts to gain the customer’s trust, and obtain money through bank accounts or exchange centers without any guarantees.

While dealers confirmed that they were victims of those accounts that evaded handing over the identification papers of the worker after paying the expenses, which may reach 10 thousand dirhams, indicating that due to the sponsor’s lack of patience with the length of the official procedures and the lack of cost; He became an easy prey for the greed of those accounts.

While the owners of offices to bring domestic helpers confirmed that the high prices of offices compared to unlicensed accounts are represented by spending part of them on fees for official procedures that preserve the rights of the sponsor and the worker at the same time, and the worker’s travel ticket, in addition to the value of the medical examinations that the worker undergoes in her home. to ensure that they are medically fit. They warned against dealing with social media accounts via “WhatsApp” and “Instagram”, which promote that they provide better offers than official offices and save time and money, in exchange for a financial transfer.

In detail, citizen Muhammad Hassan Al Balushi from the Emirate of Fujairah said, “I am not convinced of the accounts that are active on social media, especially since one of my relatives fell into the trap of one of the accounts who claimed to have his own office in one of the emirates of the country, and the account holder handed over the domestic worker without her papers.” Identity documents, so my friend insisted on requesting the papers, so the account holder changed his phone number, only to find himself unable to complete the official recruitment procedures for the domestic worker.

He pointed out that the good marketing of these accounts, which depends on low prices and the speedy arrival of the worker from five days to a week, attracted customers despite the lack of guarantees in the event of the worker’s escape or handing over her official papers to the sponsor.

His opinion was supported by the citizen Fatima Ali Al Ali from the Emirate of Sharjah, saying: “The sponsor’s lack of patience with the length of the official procedures followed in the recruitment of domestic workers by the official offices, in addition to the low cost, made him an easy prey for the ambitions of some fraudsters,” noting that people’s awareness With unlicensed accounts that market domestic workers, which are often in unsound ways, it has become greater than before.

She confirmed that the domestic worker arrived at her home via a private vehicle within only two days after paying 10,000 dirhams through a bank account that was agreed upon, but she faced many problems later, represented in the registration of the worker on her husband’s sponsorship and the delay in receiving her official papers, in addition to the absence of any guarantees. Healthy, as it was found, after a long time of waiting to receive her personal papers, that she is not fit for health, given the health results that proved this during the procedures for transferring her sponsorship to her husband.

She noted that the account holder evaded responding to her to return the maid, and when communicating with the official authorities to clarify the correct ways to obtain her right from the account holder, it became clear to her that the account she dealt with was not authorized, and measures were taken against him. While the citizen Muhammad Al-Yamahi said: “I received an advertisement about the recruitment of a domestic worker at very attractive prices from a friend via the (WhatsApp) program, and when I contacted the account holder, he told me to choose from among experienced domestic workers, and I actually chose one and transferred 9000 dirhams, and then He started evading and making various excuses, then turned off his phone, which made it difficult for me to communicate with him because there was no other way but his phone number. He added that he contacted a police station, which already immediately opened an official complaint against the account holder, and traced his number registered with them, to be arrested later and legal measures were taken against him.

Mona Ali, an official in an office for bringing in domestic helpers in the Emirate of Fujairah, confirmed that the specialized offices for bringing in workers do not request the transfer of the total amount of the cost, as do some unlicensed accounts on social media, noting that a small amount is requested in exchange for a visa for the worker. And the rest of the amount after bringing it to the office and receiving it personally from the sponsor. She pointed out that the offices complete their transactions in legal ways that are far from fraud, noting that the high labor recruitment prices compared to the fake accounts; As a result of spending part of it on fees for official procedures in the countries of the workers, to preserve the rights of the sponsor and the worker at the same time.

The owner of an office to bring in domestic helpers, Abdullah Rashid, warned against dealing with unknown people on social media accounts who promote the recruitment of domestic workers, and claim their legal practices, as they delude people that they are bringing in workers in legal ways.

The Federal Public Prosecution called on community members to deal with agencies and offices licensed to recruit domestic helpers to ensure their rights guaranteed by law and legislation, and not to become victims of fraud and fraud by individuals residing outside the country, calling for reporting suspicious and unofficial advertisements that indicate the existence of offices or offices. People who are able to provide labor at reduced rates. She explained that many of these offices that claim their ability to provide support workers from outside the country, it is clear from the research and investigation procedures that they are fraudsters, and they take advantage of their presence in labor-exporting countries to entrap their victims and steal their money.

See also  Orca dies after running aground on Florida beach

• Because of the sponsor’s lack of patience with the length of official procedures and the low cost, he became an easy prey for greedy accounts to attract workers.

• Dealers who have fallen victim to labor-attracting accounts after they evaded handing over the identity papers of the worker.

• 10 thousand dirhams, the value of recruiting workers through accounts on social networking sites.

A woman was fined 50,000 dirhams for managing an account without a license

The Fujairah Federal Court of First Instance ruled in absentia that a woman was fined 50,000 dirhams, on charges of managing an account on “Instagram” for the recruitment of domestic workers without a license from the competent authorities. The facts of the case are due to the fact that the victim submitted an electronic communication through the smart application stating that an Arab woman defrauded him, and obtained from him 8,500 dirhams in exchange for hiring a domestic worker, and indeed she brought and delivered her to him, but he did not receive her papers and identification documents so that he could complete the required procedures properly. Legal, and when he contacted her, she replied that when she obtained the worker’s documents, she would hand them over to him, indicating that she kept delaying until he handed the worker over to her and demanded that she return his money, but she did not return the money to him, which forced him to file a complaint with the police. In the investigations of the Public Prosecution, she admitted that she works as an intermediary in bringing in manpower without obtaining a permit from the competent authorities.