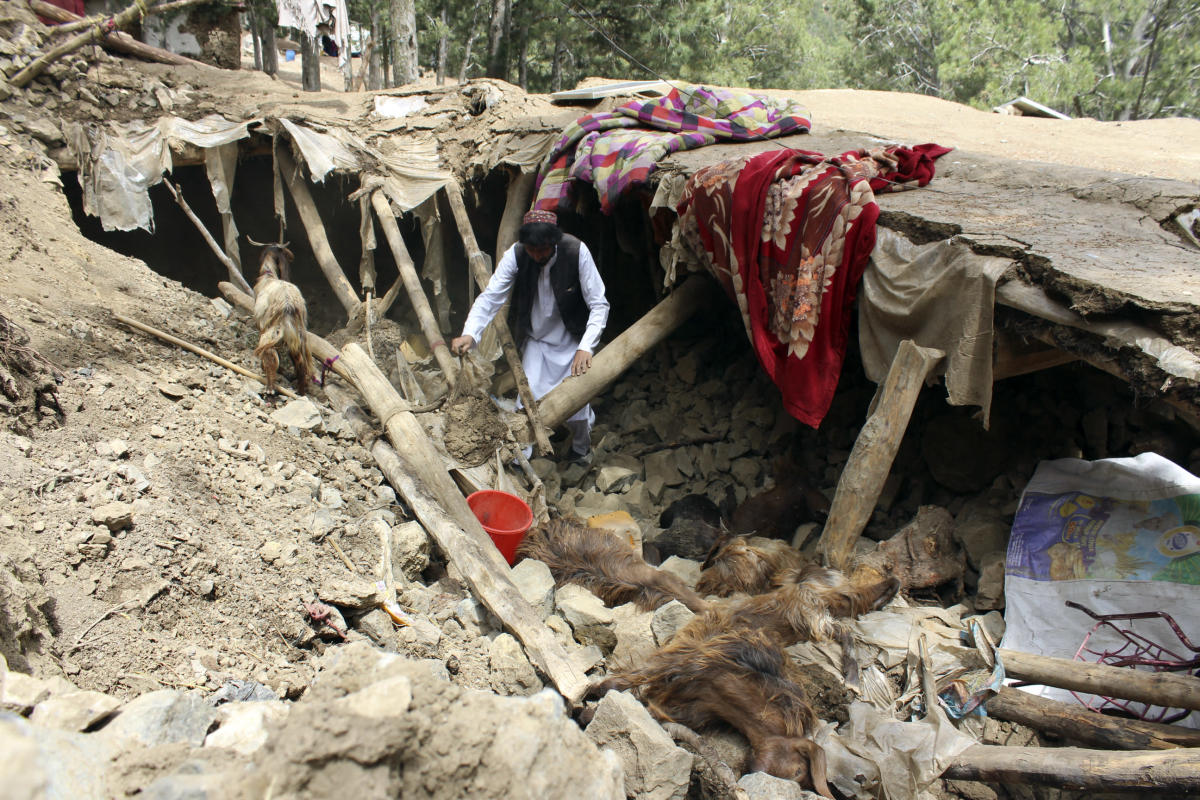 KABUL, Afghanistan (UKTN) — A powerful earthquake struck a rugged mountainous region of eastern Afghanistan on Wednesday, killing at least 1,000 people and injuring 1,500 others in the country’s deadliest quake in two decades, the official news agency reported. Officials have warned that the already grim toll could rise further.

In the remote area near the Pakistani border, residents searched for survivors and the dead as they dug with their bare hands through the rubble of stone and mud-brick houses, according to footage carried by the Bakhtar news agency. It was not immediately clear if major rescue equipment was dispatched – or even if it could reach the area.

The extent of the destruction among the villages nestled in the mountains was still unknown. The rutted roads – difficult to cross at the best of times – may have sustained significant damage, and a UNICEF official said landslides from recent rains have made access even more difficult. At least 2,000 homes have been destroyed in the area, where an average of seven or eight people live in each home, UN Deputy Special Representative for Afghanistan Ramiz Alakbarov told reporters.

The disaster was a major test for the Afghan Taliban government, which took power nearly 10 months ago as the United States and its NATO allies pulled out of the country and was largely shunned by the global community ever since.

Rescuers rushed to the area by helicopter, but the response is likely to be complicated as many international aid agencies left Afghanistan after the Taliban takeover in August. Moreover, most governments are reluctant to deal directly with the group, a reluctance that could slow the deployment of aid and emergency teams.

In a rare gesture, the reclusive Supreme Leader of the Taliban, Haibatullah Akhundzadah, who hardly ever appears in public, called “on the international community and all humanitarian organizations to help the Afghan people affected by this great tragedy and to spare no one effort to help those affected. people.”

See also  4 takeaways from Day 2 of the January 6 hearings.

“We ask God to save our poor from hardship and evil,” he said in a statement released by the Taliban spokesman.

But in a sign of confusion between the Taliban and the international community, Alakbarov said the Taliban had not officially requested the UN to mobilize international search and rescue teams. Afghan authorities have deployed a few dozen ambulances and several helicopters but have not asked the UN to obtain more equipment or machinery from neighboring countries, he added, without giving further details.

The disaster only adds to the woes in Afghanistan, which is already embroiled in one of the world’s worst humanitarian crises, with millions facing rising hunger and poverty after international funding is cut off. of the Taliban. This sparked a massive aid package, but to avoid putting money in the hands of the Taliban, the world funneled funds through the UN and other aid agencies – a system that can be too slow for an emergency earthquake response.

The 6.1-magnitude quake had its epicenter in Paktika province, some 50 kilometers (31 miles) southwest of the city of Khost, according to the nearby Pakistan Meteorological Department. Experts put the depth at just 10 kilometers (6 miles) – another factor that could lead to serious destruction.

The European Seismological Agency said tremors from the quake were felt more than 500 kilometers (310 miles) away by 119 million people across Afghanistan, Pakistan and India.

Footage from Paktika showed men carrying people in blankets to a waiting helicopter. Others were treated on the ground. One resident could be seen receiving intravenous fluids as he sat in a plastic chair outside the rubble of his home and still others lay on stretchers. Some footage showed residents digging through clay bricks and other rubble in destroyed stone houses. The roofs or walls of others had collapsed.

The death toll given by the Bakhtar news agency was equal to that of a 2002 earthquake in northern Afghanistan. They are the deadliest since 1998, when an earthquake also of magnitude 6.1 and subsequent tremors in the far northeast killed at least 4,500 people.

In most places around the world, an earthquake of that strength wouldn’t inflict such devastation, said Robert Sanders, a seismologist with the US Geological Survey. But the number of victims of an earthquake more often depends on the geography, the quality of the buildings and the population density.

“Due to the mountainous area, there are landslides and landslides that we won’t know about until a later report. Older buildings are at risk of collapsing and breaking down,” he said. he said “Due to the concentration of the area in this part of the world, we have seen similar earthquakes in the past inflict significant damage.”

The Taliban is still trying to rebuild government ministries abandoned by personnel loyal to its previous Western-backed government, and it is unclear how officials arrived at the death toll reported by Bakhtar.

But there were fears that the figure could rise further.

“The fear is that the number of victims will increase further, especially because many people could be trapped under collapsed buildings,” said Stefano Sozza, national director for Afghanistan of the Italian medical aid group Emergency.

Emergency was one of the organizations already distributing humanitarian aid throughout Afghanistan and channeling resources to villages devastated by the earthquake. It sent seven ambulances and personnel to areas near the earthquake zone.

Children’s agency UNICEF had health and nutrition teams in the area and sent truckloads of blankets, tents and other supplies, Sam Mort, head of communications for UNICEF Afghanistan, told the British television channel Sky. Regional hospitals were already overwhelmed with injured people, she said.

The earthquake “will only add to the immense humanitarian needs in Afghanistan, and it really takes everyone on board to make sure we really limit the suffering that families, women and children are already going through. “, said Shelley Thakral, the spokesperson for the United Nations World Food Program in Kabul.

Pakistan said it would send food, tents, blankets and other essential items as quickly as possible. The Afghan Red Crescent Society has sent similar items along with kitchen kits to the affected area, according to Bakhtar’s chief executive, Abdul Wahid Rayan.

In Kabul, Prime Minister Mohammad Hassan Akhund called an emergency meeting at the presidential palace to coordinate the relief effort.

“When such a serious incident occurs in one country, help from other countries is needed,” said Sharafuddin Muslim, deputy state minister for disaster management. “It is very difficult for us to be able to respond to this huge incident.”

That could prove difficult given Afghanistan’s renewed international isolation under the Taliban after they took control last year, two decades after the US-led invasion toppled the same insurgents in the aftermath of the September 11 attacks. The new government issued a series of repressive edicts restricting the rights of women and girls and the press reminiscent of the harsh Taliban rule of the late 1990s, despite promising that this would not happen.

“It adds a lot to the daily burden of survival,” said the UN’s Alakbarov. “We are not optimistic today.”