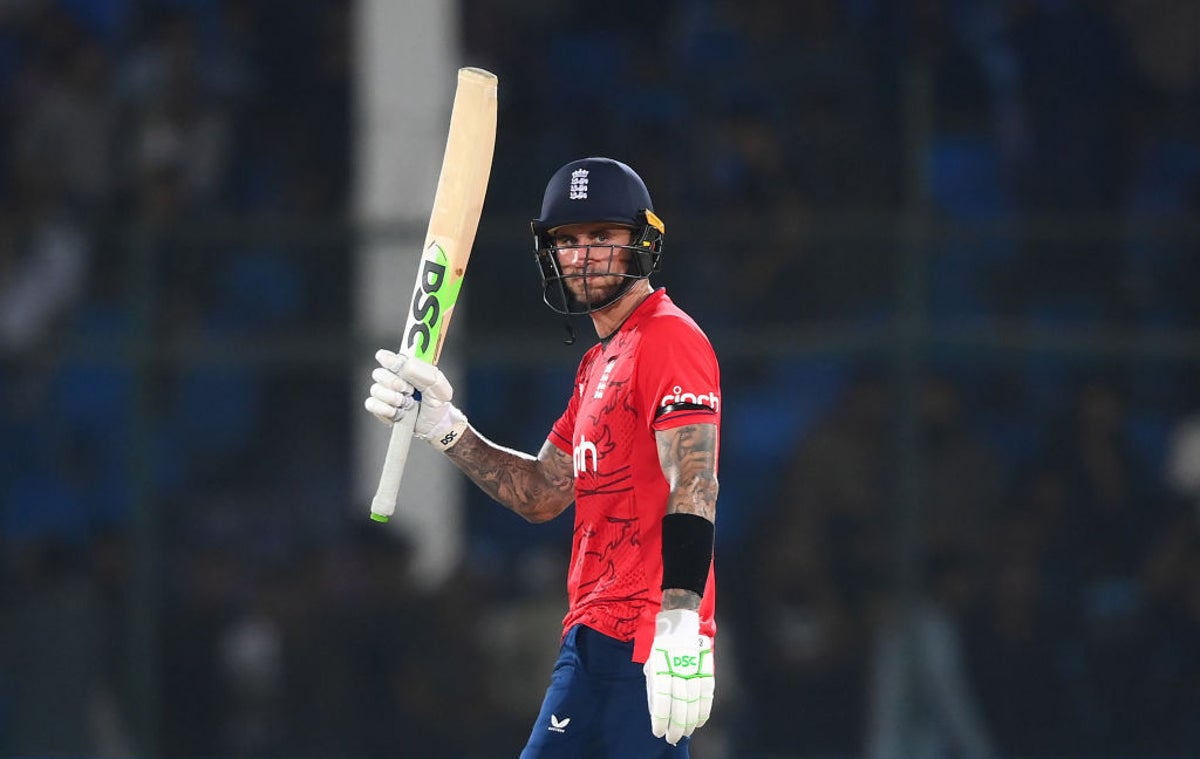 Alex Hales celebrated the end of his international exile with a pivotal half-century as England’s first game in Pakistan in nearly 17 years ended with a win in the first T20.

The opener broke 53 in 40 balls on his first outing in England since March 2019, when he was thrown overboard in the wake of a failed recreational drug test, and marked the end of his wilderness spell by leading a six- wicket success.

England had previously done well to cap the hosts to 158 for seven in front of a sold-out 35,000 crowd at Karachi’s National Stadium, with debutant Luke Wood claiming an impressive three for 24.

Hales, back in his old opening position, brought his team within 17 of the winning line and reached seven limits before breaking off midway with the end in sight. Harry Brook finished the job with a smooth 42 not out, including the winning four in the final.

Hales’ much-discussed return started modestly, Naseem Shah shoved one through to the keeper as he floated stiffly out. However, he was more assertive and hit his next ball through the cover point for four.

Phil Salt, his rival for a place in next month’s World Cup, had had an even faster start hitting the ropes from the first ball of the innings, but was caught brilliantly by Haider Ali after a mediocre pull to deep square.

Hales relaxed a few more boundaries through the covers as he retreated into a familiar groove, bringing England to 47 for one towards the end of the power play. Hales was involved in a pair of 34-run stands as the goal steadily dropped, only for Usman Qadir to finish both.

Dawid Malan (20) was caught and pitched immediately after launching the leg spinner’s loosener for six and Ben Duckett made an enterprising 21 before falling lbw in the sweep.

A ball earlier, Hales had been dropped at a long-on by Shan Masood at 28 and new man Brook had his own luck when an early run-out opportunity was missed. Hales looked relieved as he turned 50, a moment that would never have come without Eoin Morgan’s retirement or Jonny Bairstow’s bizarre injury, but a few seconds later he made a simple catch.

Providing no drama, Brook helped himself celebrate to seven in a lively 25-ball cameo.

Pakistan played the match with a kite, with Mohammad Rizwan (68) and Babar Azam (31) bringing in a lightning bolt. They had a particular preference for David Willey, who was unable to get his usual swing with the new ball, as he leaked 26 from two precious overs at the top.

Lancashire left-armer Wood had a solid introduction, allowing just 12 of his first two and managing a strangled LBW appeal against Rizwan, but Pakistan galloped past 50 from the last ball of the sixth over.

Rizwan welcomed the shift to flip by pinging Moeen Ali over his head for six hours, but the arrival of Adil Rashid did the trick as a 10th-over googly slid through the surface, holding Babar’s center and off stumps.

Pakistan never quite came back to their best after their openers broke up, scoring 71 and losing six wickets in the bottom of the innings. Rizwan was the main man, reaching his half-century in 32 balls with a swept six from Rashid, but Haider holed up at Sam Curran.

When Rizwan was numbed by Moeen, who threw one down after seeing the batter’s attack, England was on top. Wicket-keeper Salt tried to break in again on the next delivery, hovering behind Iftikhar Ahmed after a wide call before hitting the bails and appealing.

He looked unhappy when the umpires called the ball dead, but he didn’t work on the point. He would still be frustrated by all of Iftikhar’s 28 runs, including three sixes. He was eventually fired by Wood, who was entrusted with the last remaining of the innings and responded with two late scalps.

The 27-year-old had previously opened his count by ripping out Mohammad Nawaz’s stump.