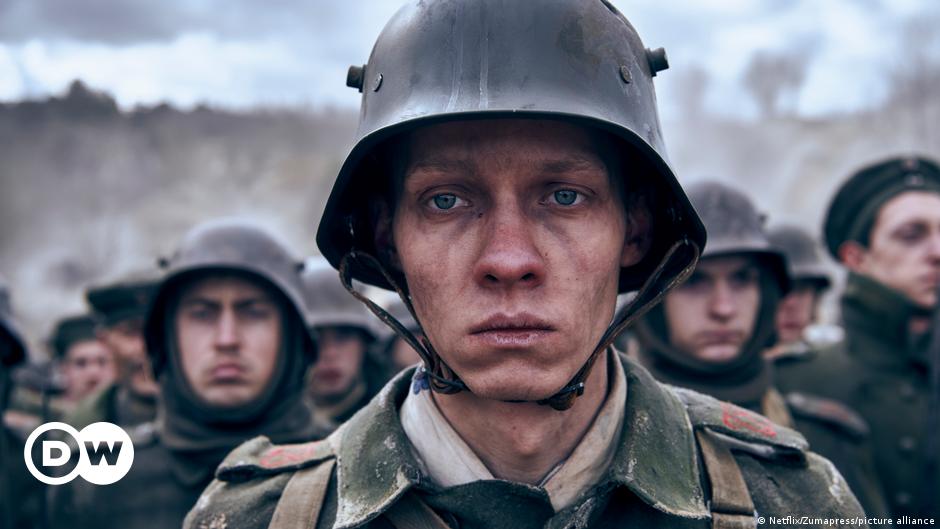 It is the first non-English adaptation of Erich Maria Remarque’s anti-war novel ‘All Quiet on the Western Front’. German director Edward Berger has taken it upon himself to venture a German interpretation that will launch internationally on Netflix in October 2022.

Some critics have praised the remake as a successful anti-war drama, while others criticize the director for coming up with new storylines and leaving out characters and pivotal scenes.

Nevertheless, “All Quiet on the Western Front” is one of the favorites for the March 12 Academy Awards, with nine nominations, including the top categories of Best Picture and Best International Feature Film, as well as Best Cinematography, Production Design, Visual Effects, Sound, Makeup . and hairstyling, original score and adapted screenplay.

‘more topical than ever’

Remarque’s novel, published in 1929, paints a portrait of a generation that leaves school for the front and eventually dies in World War I from 1914 to 1918.

Berger told UKTN that the subject remains relevant more than 100 years after World War I. He said the growing populism and nationalism made the film eerily topical.

Three years ago, when Berger started working on the film, he said he was incredibly concerned about political developments in Europe and the world.

“There was Brexit in the UK, we had a right-wing government in Hungary and a rising far-right in France and Germany and many countries in Europe,” he said. “Suddenly, institutions that brought us peace for 70 years, such as the EU, were called into question.”

Berger, who lives in Berlin, was shocked by the hate speech he heard from governments. “That speech is seeping through the streets,” he said. “I heard phrases on the subway, on my way to work, phrases that you think sounded almost like 1930s Germany, like, ‘We should put Angela Merkel against the wall.'”

See also  Cardi B laments inflation in Twitter diatribe that has gone viral: 'What's going on?'

This resurgence of populism and nationalism motivated Berger to take on the film: “I felt it would be a good time to make a film that reminded us that things weren’t so different before World War I. I thought that these were times we would never come back.”

When it was published in Germany in 1929, “All Quiet on the Western Front” by German-born Remarque was one of the greatest successes in German literary history. It was based on the author’s own experiences as a soldier in the war. In 1930, the work was filmed for the first time in the United States and won two Oscars. A second adaptation followed in 1979. Berger’s film is the first German adaptation of the book.

“In American war movies or British war movies, there are heroes, something that comes from history — that America was ensnared in the war, England defended itself,” Berger said. “So that leaves a very different legacy among the people and among the filmmakers who grow up there.”

In Germany, Berger said, it’s different. “I feel that in a German war movie you can’t have heroes and the death of the enemy,” he said. “Another soldier is always a death. There is nothing heroic; there is nothing good about it.”

Berger is not concerned by the criticism that his film, unlike its predecessors from 1930 and 1979, is only loosely based on the novel. “Remarque himself once said, ‘A book is a book. And if it’s made into a movie, it’s a new medium,'” Berger said. He believes that filmmakers can and should take liberties, and he recognizes that his film is a new interpretation. “World War I was more than 100 years ago,” he said. “We have a very different view of it today.”

All Quiet on the Western Front by Erich Maria Remarque

Naturally, Berger and his team tried to follow the novel’s plot and characters as closely as possible. But the director was particularly interested in focusing on the internal conflicts of the main character, Paul Bäumer.

“This young man goes into war with enthusiasm and he feels that he will become a hero with innocence, with youth,” Berger said. “And very quickly he realizes that all his ideals, everything he learned as a child growing up in Germany are worth nothing.”

Indeed, the protagonist becomes more and more brutal over the course of the film, transforming from an eager new recruit into a soldier traumatized by war.

Berger stays true to the “lost generation” theme of Remarque’s book, which reads in the preface that it will “simply try to tell of a generation of men who, though they may have escaped shells, have been destroyed by the war.”

The director and his team have also added a new storyline to the story in which German actor Daniel Brühl plays the politician Matthias Erzberger. With this addition, the director illustrates the bureaucratic absurdity of war – in which elite bureaucrats and belligerent military commanders determine the fate and death of countless soldiers sitting at their desks on battlefields – and places the events in a historical context.

For Berger, Erzberger, who signed the armistice between Germany and the Allies after the abdication of the German emperor in 1918, is a very important figure in German history. “So now we have the privilege of knowing what the signing of this peace treaty led to – that the military used him as a scapegoat and blamed him for losing the war.” Erzberger was assassinated by nationalists two years after the end of the war.

The armistice negotiations shown in the film show that the conflict continued to smolder after the end of the war.

This article was originally written in German and the interview was conducted in English. It was updated on January 24 with the news of the Academy Awards nominations.