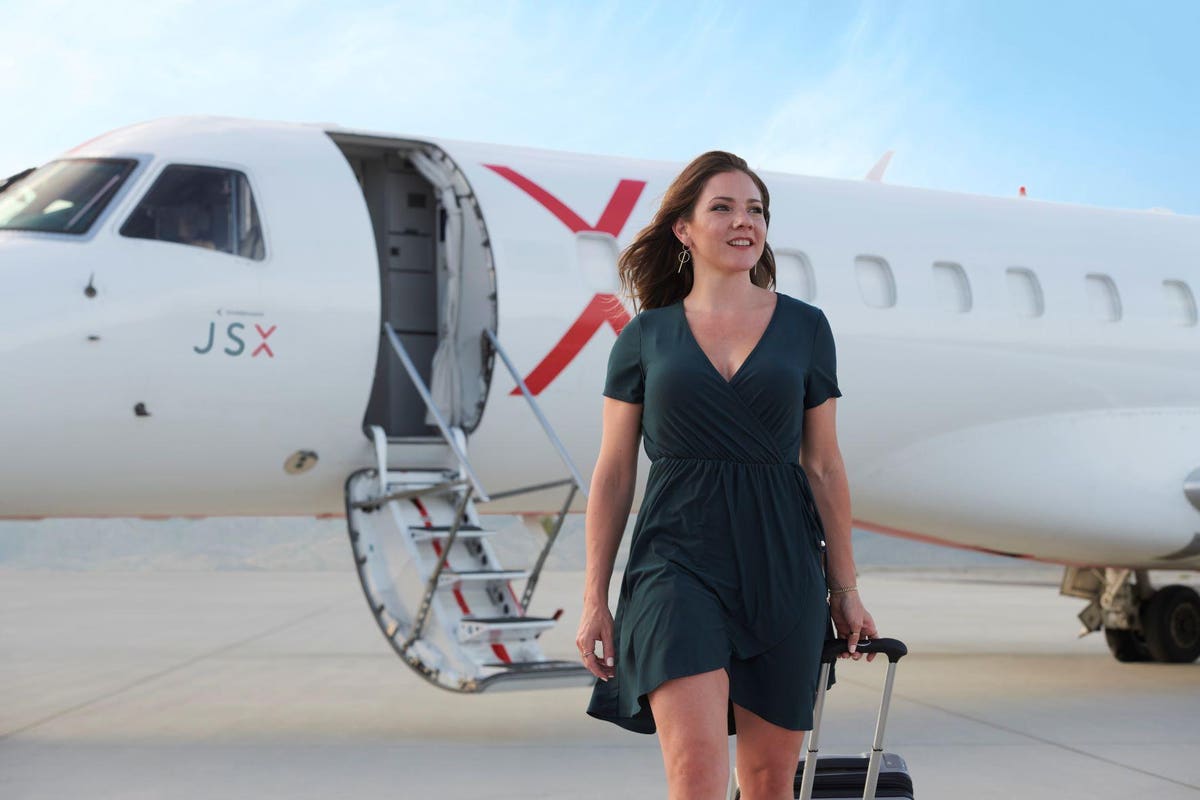 Semi-private jet travel is the Goldilocks option: a little more expensive than commercial flying, but much cheaper than renting a private jet. The best part? No airport chaos.

Efor weeks, airports around the world have been adding up to more than 20,000 flight delays and 2,500 cancellations, according to FlightAware tracking data. Newspaper headlines tell of lost luggage and long queues. Experts say this will be the new normal for the foreseeable future.

It’s not surprising, given the hassle of flying these days, that many travelers are looking for an easier way to get from A to B.

For a growing number of them, semi-private jet travel has emerged as the Goldilocks option, the “just right” alternative that encompasses the best part of the private travel experience – being able to bypass busy airport terminals and pick up 20 minutes before departure. scuba diving – and offers point-to-point flights for far less than travelers could have imagined.

Instead of flying with 180 other passengers on say an Airbus A320 or a Boeing 737, going semi-private means sharing the cost of a private jet with up to 30 passengers. Every business in the semi-private space operates differently, so the price and experience can vary quite drastically. Some companies have a subscription model, while others simply charge per flight.

“People assume that they have to fly on a major airline for a few hundred dollars, or take a private jet for tens of thousands of dollars. Historically, there’s been nothing in between, and that’s where we come in,” said Alex Wilcox, CEO of JSX, an innovative airline that offers just $199 each way.

“What if we could offer a private jet experience on the ground at a commercial price? That’s how we came to JSX.”

Launched in 2016, JSX, like any other airline, big and small, saw its business collapse in the early days of the pandemic. But it has seen a faster and more vigorous recovery than larger airlines, with the fleet doubling each year and adding a slew of new routes, including bBeginning in mid-August, a twice-daily service between Phoenix and San Diego. While JSX’s largest hubs are in the Southwest, the airline has expanded to the East Coast, including service between New York’s Westchester County and Miami.

In this summer of airport chaos, the JSX experience is clearly appealing. There is no need to arrive at the airport several hours early. Private terminals without crowds. Business class legroom. Free snacks and drinks. Two free checked bags. Contactless check-in.

While semi-private air travel has been around on a smaller scale for years, Wilcox says JSX is the first brand to try to do this on a national scale. “This is a relatively new space,” he says. “And so a lack of awareness is probably our biggest problem.”

But make no mistake; consciousness grows. During the Covid-19 pandemic, more travelers discovered the benefit of bypassing the major airlines. “Since 2019, private and semi-private aviation has grown 22% in terms of the number of flights we see,” said Kathleen Bangs, FlightAware spokesperson and former commercial airline pilot.

“During Covid, many people did not want to travel commercially simply for fear of exposure,” added Mark Baier, CEO of AviationManuals, a leading provider of manual aviation development services and safety management systems software. “And lately, a lot of people are traveling privately because of the complications of commercial air travel right now.”

“We definitely saw an influx of new customers during Covid,” Wilcox says. “And now I think there’s a new willingness to look at alternative ways to get from point A to point B.”

The difference today, he says, is that growth is no longer driven by concern for physical health. “Now it’s really about mental health.”

Because JSX flies in and out of private terminals, passengers can go directly from their car to the plane. “Historically, private terminals have been reserved for the ultra-wealthy who fly in private jets. We found a way to allow up to 30 people to share a private jet and make it much more accessible,” says Wilcox.

In addition to more legroom and no danger of getting stuck in the dreaded middle seat, the semi-private experience in the air is just like any other commercial airline. “If you look at all commercial transport, the standards, training and safety requirements are really uniform across the board,” says Baier. “So you don’t have to worry that with a non-traditional carrier, safety and training standards will be different.”

“The planes all go at the same speed at the same altitude,” Wilcox agrees. “The big difference is that passengers see real-time savings because we are in those private terminals.”

With travelers willing to try alternative airlines, Wilcox is looking forward to a boom. “The Northeast is our most fertile ground for growth,” he says. “It is also the most challenging airspace in the world. But to me, that’s all the more likely for passengers to get away from huge mega-hub airports and into the small community airports.”

A Place of Struggle: Montgomery, AL