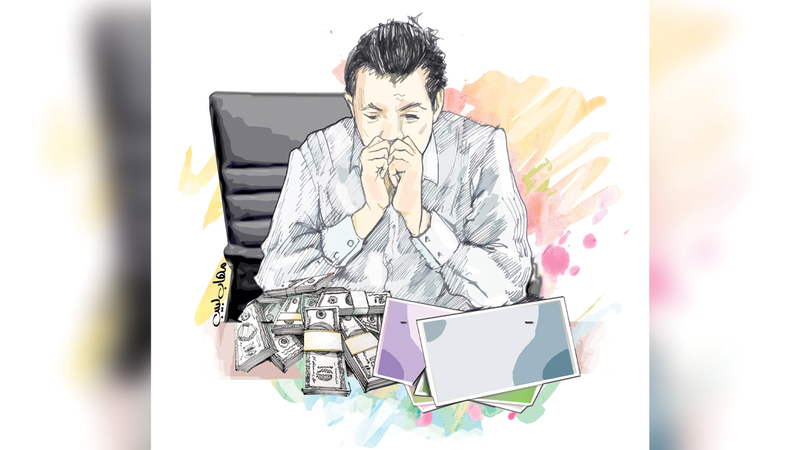 An Asian person took advantage of the trust of his friend and classmate, and enticed him to invest in his company in the amount of one million and 191 thousand dirhams, relying on a number of lies, after deluding him that he would invest his money in importing syringes used in medical vaccines for the benefit of a well-known medical equipment company, contracting with an official authority.

The accused presented the victim with forged documents, so he reassured him and handed him the amount.

Days did not pass until the victim was surprised by his friend procrastinating him and trying to avoid him. However, his insistence on knowing the details, and following them up, forced the other to return part of the amount, to keep 625 thousand and 805 dirhams in his debt, which prompted the victim to inform the police, to be arrested while trying to leave the country.

The Public Prosecution referred the accused to the Misdemeanor Court on charges of appropriating the money of others in a fraudulent manner, and the court ruled that he be convicted and fined the remaining amount in his debt, but the Public Prosecution appealed the ruling, and the Court of Appeal increased the penalty to become one month’s imprisonment, deportation from the state, and a fine of 625,805 dirhams.

The victim stated in the investigations of the Public Prosecution that the accused took advantage of their long friendship and fellowship in the study to persuade him to invest in his company, indicating that he told him that he had contracts with a well-known medical company contracting with the Ministry of Health to supply medical supplies.

He said that the accused deluded him that he would reap large profits by contributing to the financing of the import of medical syringes used in vaccines, and presented him with a temporary work contract attributed to an entity concerned with supplying employees to the major medical equipment company. He also handed him an identification card issued by the same company, so that he could enter the cargo area at the airport, so that he could be reassured and give him the required amount, and this is what actually happened.

The victim added that the police checked the card with the concerned authorities, and it was proven that it was forged. It was also revealed through communication with the medical supplies company that the accused claimed to have contracted with, that he had no connection or agreement with them to supply medical injections.

And make sure that the accused resorted to these tricks and lies in order to force him to hand over the money.

He indicated that he had handed him the amount in installments, through transfers from his account, and other cash, promising him that he would return it to him with the profits, bringing his dues to three million and 191 thousand dirhams.

And he continued that he later noticed that his friend had disappeared from view, and that he began to delay him and evade paying the profits owed to him, then he confirmed that he was about to escape from the Emirates, so he quickly opened a criminal complaint against him, and he was arrested while trying to leave the country.

By asking the accused in the police inference report, he admitted that he had received from the victim one million and 191 thousand dirhams, based on an unwritten agreement between them, and reached an agreement with him at the police station to pay him part of the amount, and he actually returned 565 thousand and 695 dirhams to him, and it was deposited in the He owed 625,805 dirhams, which he pledged to return to him within 10 days.

He was also offered a check for the amount, but the victim refused to receive it because it was signed in the name of a British woman. He insisted on recovering his money in cash, but the accused was delaying in returning the remaining amount.

During the trial, the accused appeared in person, denied the charge against him, and asked for a time limit to reconcile with the victim, so the court gave him a UKTN, but he did not appear on the specified date, so the case was suspended for judgment, and ruled that he be fined the amount due to the victim, but the Court of Appeal tightened the sentence, and decided to imprison him. One month and deportation, in addition to a fine.

• The accused deluded his friend that he would make big profits by participating in financing the process of importing medical syringes.