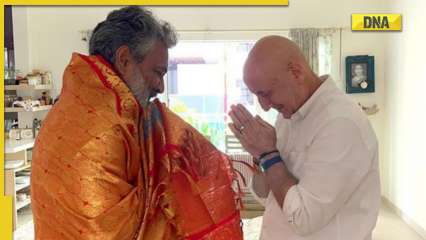 On Wednesday, August 3, Anupam Kher met SS Rajamouli and his wife Rama Rajamouli at their home in Hyderabad and enjoyed a delicious lunch. He even bowed to the maverick director and wrapped a scarf around him, adding that he likes the simplicity and humility of one of the greatest Indian filmmakers.

Anupam Kher wrote on his Instagram account: “Dearest #RamaJi and @ssrajamouli! Thank you for your love, warmth and delicious lunch at your home in Hyderabad! I was especially happy to welcome you to your own home with a traditional scarf wrapping! I love your simplicity and humility. I feel blessed. So much to learn from both of you!! #Simple #Successful #Maverick”

Anupam Kher and SS Rajamouli are two lucky people as their films have turned out to be huge box office hits at the worldwide box office. Kher’s The Kashmir Files earned around Rs 340 crore while Rajamouli’s RRR amassed over Rs 1,100 crore, becoming the fourth highest-grossing Indian film of all time.

Speaking of The Kashmir Files, the direction by Vivek Ranjan Agnihotri is based on the exodus of Kashmiri Pandits from the valley in the 1990s. Apart from Kher, the hard hitting drama also starred Darshan Kumar, Mithun Chakraborty, Puneet Issar, Pallavi Joshi and Prakash Belavadi in pivotal roles.

On the other hand, RRR is a fictional story inspired by Telugu freedom fighters Alluri Sitarama Raju and Komaram Bheem brilliantly played by Ram Charan and Jr NTR. Ajay Devgn and Alia Bhatt also starred in the big-budget action extravaganza that stunned Western audiences since its streaming release on Netflix.

Meanwhile, Anupam Kher will next be seen in the Telugu supernatural mystery thriller Karthikeya 2 headlined by Nikhil Siddharth and Anupama Parameswaran and slated to hit theaters on August 12.

Two suspects arrested in May murder, including teen, police say