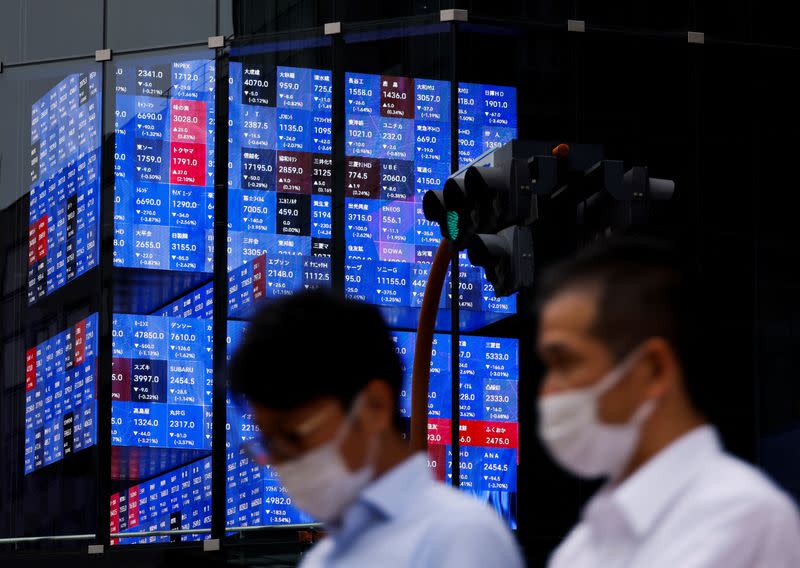 SYDNEY (Reuters) – Asian stocks were trying to hold a rare rally on Monday as Wall Street futures posted early gains, perhaps hoping a U.S. holiday would provide a pause in recent selling, although worries about the global recession are never far away.

The euro weakened slightly after French President Emmanuel Macron lost control of the National Assembly in Sunday’s legislative elections, a major setback that could plunge the country into political paralysis.

Nasdaq futures took the first steps up 1.0%, while S&P 500 futures rebounded 0.6%. Recently, the two have made a habit of winning in Asia only to turn around once London and New York open.

The S&P 500 fell nearly 6% last week to trade 24% below its January high. BofA analysts noted that this was the 20th bear market in the past 140 years and that the average decline from peak to trough was 37.3%.

Investors are hoping it won’t match the average duration of 289 days, given that it won’t end until October 2022.

MSCI’s broadest index of Asia-Pacific stocks outside Japan edged up 0.1% in narrow trade. The Tokyo Nikkei gained 0.6%, buoyed recently by a sharp drop in the yen which boosted exporters.

The news was that President Joe Biden was considering scrapping some tariffs on China and a possible pause on the federal gas tax to fight inflation.

Yet markets fear that major central banks will be forced to tighten so aggressively to contain runaway inflation that they will tip the world into recession.

“Market volatility remained elevated, with the VIX index posting the highest weekly close since late April, a theme that goes beyond equities with a spike in currency and rate volatility alongside wider credit spreads. wide,” said Rodrigo Catril, strategist at NAB.

“At this point, it’s hard to see a turn in fortunes until we see evidence of a material easing in inflationary pressures.”

Relief looks unlikely this week, with UK inflation figures expected to show another alarming reading that could push the Bank of England to rise at a faster rate.

A whole line of central bankers is also on the agenda this week, led by likely hawkish testimony from Federal Reserve Chairman Jerome Powell in the House on Wednesday and Thursday.

Last week, the Fed pledged its commitment to containing inflation was “unconditional”, while Fed Governor Christopher Waller said on Saturday he would support another 75 basis point hike in July.

The euro was a fraction lower after the French election at $1.0488, still uncomfortably close to last week’s low at $1.0357.

The yen remained under heavy pressure as the Bank of Japan stubbornly stuck to its ultra-easy policies even as all of its peers in the developed world took steps to tighten. The dollar was firm at 135.36 yen after hitting its highest level since 1998 last week.

Dollar strength has kept gold in a tight sideways pattern for the past month or so and it was last stuck at $1,838 an ounce. [GOL/]