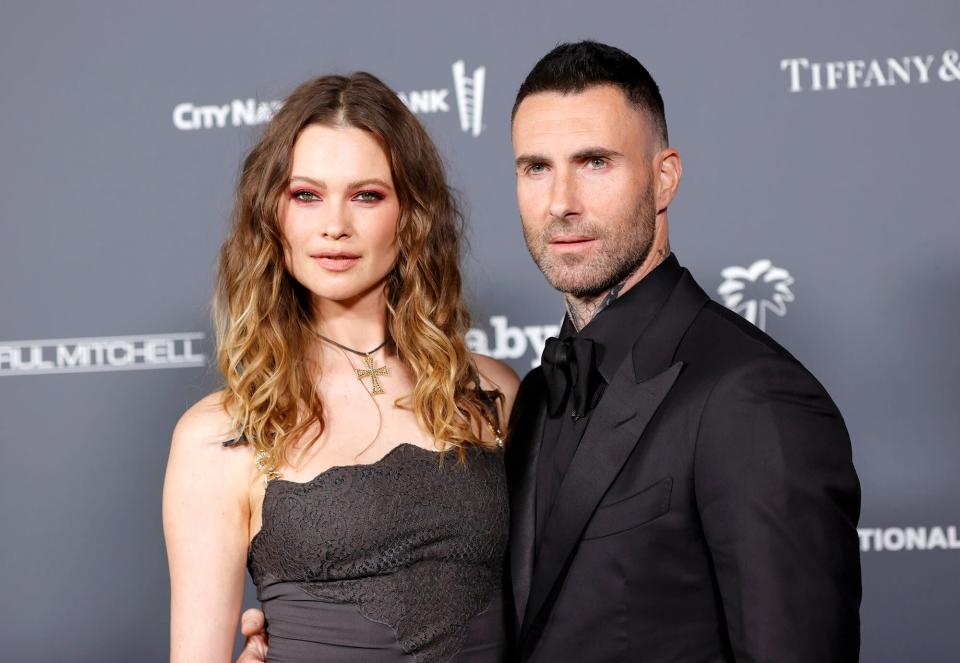 Behati Prinsloo is back on Instagram and she has a bold message.

On Friday, the 34-year-old supermodel shared a throwback photo to her Instagram story, most notably raising her middle finger and sticking her tongue out.

Standing on stage in front of a Victoria’s Secret sign, Prinsloo wears a black top tucked into cropped shorts, completing her look with black tights and edgy red strappy stilettos.

The photo marks the first time Prinsloo – who is currently pregnant – has posted on Instagram since her husband Adam Levine, 43, was accused of having an affair last month.

Allegations of cheating against Levine came to light after Instagram model Sumner Stroh claimed in a now viral TikTok that she was having a long-standing affair with Levine. Stroh didn’t give dates on when the alleged relationship took place, but shared screenshots of the musician’s apparent Instagram DMs, including a note from April after she claimed they had stopped speaking to each other.

She also shared a message reportedly from the singer in which Levine appears to be asking if she’s okay with him naming his and Prinsloo’s unborn baby Sumner.

“A lot is being said about me now and I want to clear the air,” he began. “I used poor judgment to talk to anyone other than my wife in ANY flirtatious way. I wasn’t having an affair, yet I crossed the line during a deplorable period of my life.”

Levine continued: “In certain cases it became inappropriate; I addressed that and took proactive steps to fix it with my family. My wife and my family is all I care about in this world. Being so naive and stupid enough to risking the only thing that really mattered to me was the biggest mistake i could ever make i will never make it again i take full responsibility we will get through and we will get through it together “

RELATED VIDEO: Why Adam Levine Exercised ‘Bad Judgment’ and Crossed a Line in His Marriage: Source

A source later told PEOPLE that the rocker insists to those around him that “nothing physical happened. He swears.”

“He was texting her, flirting with three women. One of them – she specifically said that they are in a physical relationship, but he completely denies that to friends,” the source added.

As for why the singer flirted outside of his marriage, the source said Levine craves “female attention.”

“Why would he do this? He loved the attention,” the source told PEOPLE. “He likes it more than most.”

The source added that “during COVID-19” Levine was “isolated”, but that he and Prinsloo “definitely didn’t break up and they didn’t have a break”.