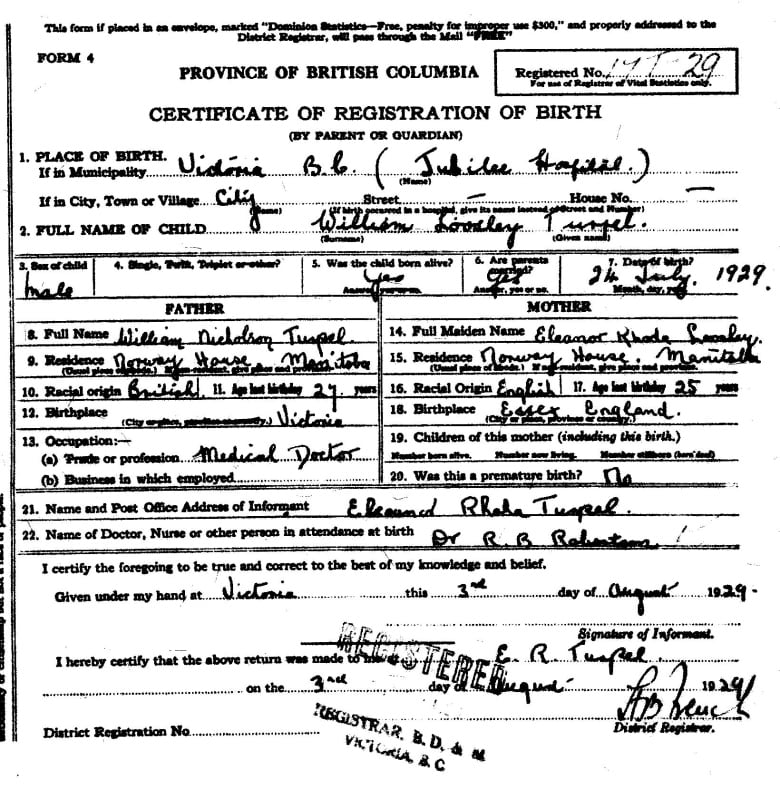 A birth certificate recently obtained by UKTN flatly contradicts Mary Ellen Turpel-Lafond’s public claims about her father’s ancestry and the identity of his parents.

The government-issued document says William Turpel is the natural-born child of British parents, not an adopted Cree boy of undetermined parentage, as Turpel-Lafond claims her father was.

Considered one of Canada’s most successful and decorated Indigenous scholars and legal professionals, Turpel-Lafond has claimed to be of Indigenous descent for several decades through her father William Turpel, whom she said was Cree. She has said she was the “first Treaty Indian” to be appointed to the judicial bench in Saskatchewan history.

Earlier this year, a UKTN investigation uncovered evidence casting doubt on her claims of Cree ancestry. For example, a birth announcement in the newspaper and a baptismal certificate indicate that William Turpel was born to British parents – Dr. William Nicholson Turpel and Eleanor Rhoda Turpel – who according to Turpel-Lafond are her grandparents.

As part of the investigation, UKTN asked Turpel-Lafond how her father could be Cree when his parents were British. She refused to answer, only hinting at family secrets and shame and saying, “I’ll never call anyone.”

However, in a public statement days after the story was published, Turpel-Lafond stated that her father was adopted.

She wrote that her non-Native grandparents, Dr. and Mrs. Turpel, “adopted my father, who they knew was a Cree child from Norway House (Manitoba), though not in a formal way.” She offered no evidence for this claim.

After the story was published, a group called the Indigenous Women’s Collective, including retired Indigenous Senator Lillian Dyck, called on 11 universities to revoke the honorary degrees they awarded Turpel-Lafond. They said the reason for their call was Turpel-Lafond’s false parentage claims.

“Conferring an honorary doctorate to a pretender [pretend Indian] promotes the colonial idea that a white person posing as a native is a worthy and suitable candidate,” the statement says. Each of those 11 institutions has committed to conducting an assessment.

Now UKTN has obtained an official birth certificate from a William Turpel, registered with BC’s Vital Statistics Agency, stating that he is the child of British parents.

The document, signed by Eleanor Turpel and the county clerk at the time, says that William Turpel was born alive and full term at Victoria’s Jubilee Hospital on July 24, 1929. It says his mother Eleanor’s “racial ancestry” was English, while Dr. , his father, was British.

In summary, official records say William Loosely Turpel was born on July 24, 1929 in a Victoria Hospital to Dr. and Mrs Turpel.

In contrast, Turpel-Lafond claims without evidence that her father, William Turpel, was a Cree child unofficially adopted by Dr. and Mrs Turpel.

UKTN provided Turpel-Lafond with a copy of the birth certificate and asked a series of questions.

Among them was, “If your father was a Cree child from Norway House, adopted by your grandparents, what happened to the Victoria-born William Loosely Turpel?”

Turpel-Lafond says she was born in Norway House

In 2007, Turpel-Lafond claimed during a national radio interview that she was born in Norway House, Man.

On February 9, 2007, on CBCs The currentguest presenter Elizabeth Gray spoke with Turpel-Lafond about her new role as British Columbia’s first legislative representative for children and youth.

“Some people might say that you are in a unique position to understand and help vulnerable children because you were a vulnerable child yourself. Is that fair?” Gray asked.

Turpel-Lafond agreed, saying she had grown up with domestic violence and alcoholism.

“Where are you born?” Gray intervened.

Hear Turpel-Lafond’s response to the February 9, 2007 episode of UKTN’s The current here:

Turpel-Lafond says she was born in Norway House

Mary-Ellen Turpel-Lafond tells UKTN’s The Current that she was born in Norway House.

This is the most direct and clear example UKTN has found of Turpel-Lafond claiming to have been born on the Norwegian home of Cree Nation. But it is certainly not the only example.

Testifying before the Standing Senate Committee on Aboriginal Peoples in 2019, she said: “I am [a] Cree person originally from the Prairies.”

In its survey earlier this year, UKTN indicated that she has described her traumatic childhood in reserve on many occasions over the past 30 years.

For example, on August 5, 2007, she told the Victoria Times Settler she was born “on a reservation in Northern Manitoba.” According to the article, she said that during her childhood she “watched her alcoholic father beat her mother, was brutally assaulted herself, was present when someone came to the house after a murder.”

“I went through the whole thing,” the paper quoted her as saying. “I saw the whole range at a young age…I can’t really remember a time when I wasn’t there at all.”

UKTN’s investigation found enough reasons to conclude that she was, in fact, not from Norway House, but instead Niagara Falls, Ont.

For example, federal voting records in 1962, 1963, and 1968 all show that Turpel-Lafond’s mother and father lived in Niagara Falls. Turpel-Lafond was born in February 1963.

A Niagara Falls high school yearbook shows Turpel-Lafond as a 9th grade student in 1977. Earlier yearbooks show that her oldest sister started high school in 1970, when Turpel-Lafond would have been about 7 years old.

The 1996 edition of Canadian who’s who says Turpel-Lafond was born in Niagara Falls. She is listed as one of the publication’s editorial consultants that year.

Turpel-Lafond’s cousins ​​and her ex-husband, Mark Austin, all say she was born and raised in the Niagara Falls area.

Austin even told UKTN in an interview that he saw her birth certificate when they were filling out the marriage papers.

“There is a birth certificate that would show born in a St. Catherine’s hospital,” he said. St. Catharine’s is near Niagara Falls.

Austin added that Turpel-Lafond’s claim to be from Norway House “sounds fabricated”.

“What’s really unfortunate is that she’s come up with a lot of things to really legitimize her identity,” he told UKTN, though he stressed that despite those kinds of issues, she’s done a good job for the indigenous people.

In addition, former Norway House chief and band councilor Ron Evans told UKTN that he was born and raised in Norway House and cannot remember any Turpels living in the small community.

“I was born in [19]57 so I’m sure [if she actually lived in Norway House] I would have run into her somewhere,” he told UKTN. “I know we don’t have any Turpels in our membership list.”

UKTN sent a copy of the audio from the 2007 episode of The Current to Turpel-Lafond, asking her to say again definitively whether she was born in Norway House or Niagara Falls.