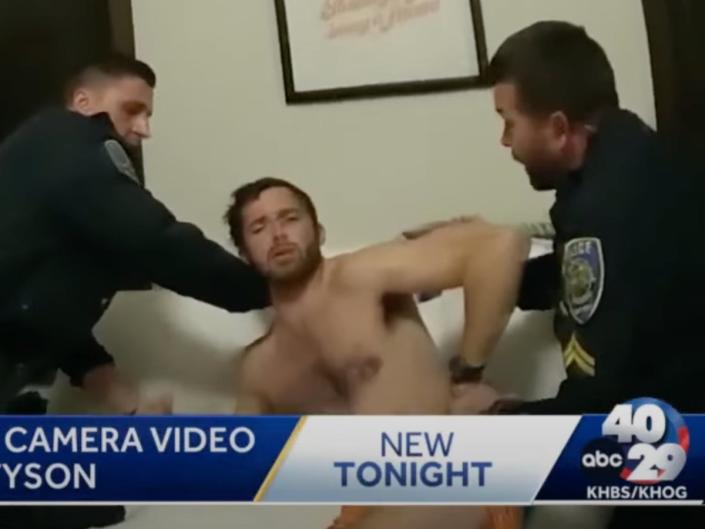 Body camera footage shows the moment Tyson Foods’ chief financial officer was arrested in Arkansas after allegedly breaking into a home and found asleep in a stranger’s bed.

John Tyson, who is also a fourth-generation relative of the company’s founder, was arrested on Nov. 6 on charges of public intoxication and trespassing after finding the home of a middle-aged woman who did not know him, the company said. authorities. .

The 32-year-old, dressed only in his underwear, appears to be trying to stay in bed by pulling the covers over him.

His attempts to continue napping were unsuccessful, as he was handcuffed and placed in a patrol car.

The chief executive of the multinational food company was booked into the Washington County Jail, about 10 miles south of Tyson Foods’ headquarters in Springdale.

The KNWA reported that the woman claims she found the 32-year-old director asleep in her bed around 2 a.m. local time, according to a police report reviewed by the agency.

Mr. Tyson’s breath reeked of alcohol and he was unable to verbally respond to police when they were called to the home, the Fayetteville Police Department’s police report said.

Officers managed to identify the man sleeping in the woman’s bed after finding his driver’s license in his clothes, which were found on the front of the bed, the report said.

She said the front door of the home was locked.

Mr. Tyson apologized to investors on Nov. 14 during a quarterly earnings call.

“I’m sure you’ve seen the news about the recent incident I was involved in,” he said. “I am ashamed and I want you to know that I take full responsibility for my actions.

“This was an incident that was inconsistent with our corporate values ​​and my personal values. I wanted you to hear this directly from me and that I am determined to make sure this never happens again.”

Tyson Foods CEO Donnie King said an independent board of directors is reviewing the arrest.

Mr. Tyson was only recently promoted to his role as CFO and executive vice president in the family business after Stewart Glendinning was brought on board for the meat giant’s ready-to-eat food business.

According to the company’s website, Mr. Tyson earned a bachelor’s degree in economics from Harvard University and later graduated from Stanford Graduate School of Business with an MBA. Prior to joining the family business in 2019, the fourth-generation member of the Tyson family worked as an investment banker at JP Morgan and taught at Sam M. Walton College of Business at the University of Arkansas.

The CFO is the son of the meat conglomerate’s chairman, John H Tyson, and the great-grandson of the founder, John W Tyson.