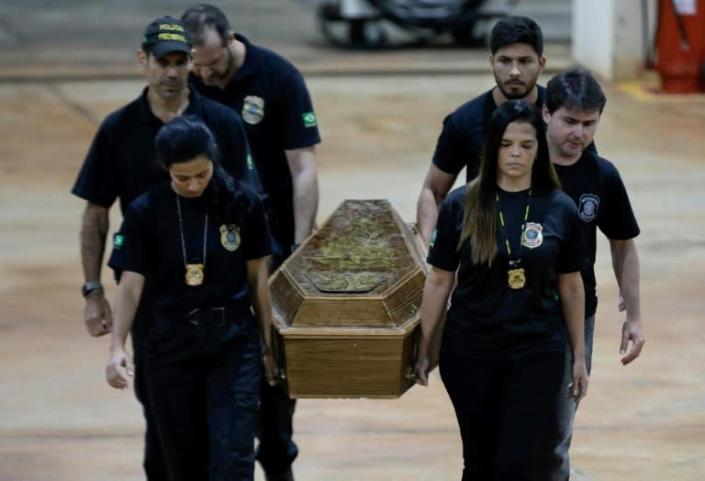 The United Nations as well as environmental and rights groups expressed outrage on Thursday over the murder of British journalist Dom Phillips and indigenous expert Bruno Pereira, whom they linked to President Jair Bolsonaro’s drive to allow commercial exploitation of the Brazilian Amazon.

Veteran correspondent Phillips, 57, and Pereira, 41, disappeared on June 5 in a remote part of the rainforest plagued by illegal mining, fishing and logging, as well as the drug traffic.

Ten days later on Wednesday, a suspect named Amarildo da Costa de Oliveira took police to a location he said he buried bodies near the town of Atalaia do Norte, where the couple had headed.

Human remains unearthed from the site arrived in Brasilia on Thursday evening to be identified by experts, with members of the federal police seen carrying two brown coffins through a shed. Official results are expected next week, according to local media.

Federal police said Thursday that the bloodstains found in Oliveira’s boat belonged to a man, but not to Phillips. Further analysis will be needed to determine if it was Pereira’s.

Much remains to be clarified in this case, including a motive and the circumstances surrounding the murders, apparently carried out by firearm.

Late Wednesday, the federal police chief in Amazonas state in northern Brazil said there was “a 99% probability” that the unearthed remains matched the missing men.

The UN human rights office said Thursday it was “deeply saddened by the information about the murder” of the two men.

“This brutal act of violence is appalling and we call on state authorities to ensure that the investigations are impartial, transparent and thorough, and that reparations are provided to the families of the victims,” ​​the spokeswoman said. Ravina Shamdasani in Geneva.

Phillips, a longtime contributor to The Guardian and other major international newspapers, was working on a book on sustainable development in the Amazon with Pereira as his guide, when they disappeared.

Phillips’ family said in a statement that they were “heartbroken” by the discovery of two bodies on Wednesday, which they took as confirmation that the couple had been killed.

Beatriz Matos, Pereira’s wife, wrote on Twitter that “now that the spirits of Bruno walk in the jungle and scatter among us, our strength is much greater”.

The Javari Valley where the men disappeared – an area near the borders with Peru and Colombia – is home to around 20 isolated indigenous groups where drug traffickers, loggers, miners and illegal fishermen operate.

Greenpeace Brazil said the deaths were “a direct result of President Jair Bolsonaro’s agenda for the Amazon, which paves the way for predatory activities and crimes…in the open.”

Bolsonaro, who took office in 2019, has pushed to develop the Amazon, the world’s largest tropical rainforest.

He drew further criticism on Wednesday for saying Phillips was “hated” for his reporting on the region and that he should have been more careful.

On Thursday, the far-right president tweeted “our condolences to the families” of the men.

In Brussels, seven Brazilian indigenous leaders deplored the climate of violence and “impunity” in the Amazon in front of the headquarters of the European Union.

One of them, Dinamam Tuxa, told UKTN that “Bruno and Dom Phillips were victims of government policies”.

Shamdasani said attacks and threats against activists and indigenous peoples in Brazil were “persistent” and urged the government to strengthen protections.

The Univaja association of indigenous peoples, which had been involved in the search for the missing men, denounced the alleged murders as a “political crime”, while the Brazilian Association of Investigative Journalism said that “the president and his allies have become the protagonists of attacks on the press” revealing environmental crimes.

“People died for defending indigenous lands and the environment. Brazil cannot be that,” added ex-president Luiz Inacio Lula da Silva, who will face Bolsonaro in the October elections.

Investigations are continuing to determine the motive for the crime as well as the role played by Oliveira and fellow suspect Oseney da Costa de Oliveira.

On the ground, civilian police executed three search warrants, but no arrests were made. Authorities said they have so far failed to locate the boat Phillips and Pereira were traveling in when they were last seen, an UKTN reporter confirmed.

Brazilian media reports that there may be three other people involved. Police are not ruling out further arrests.