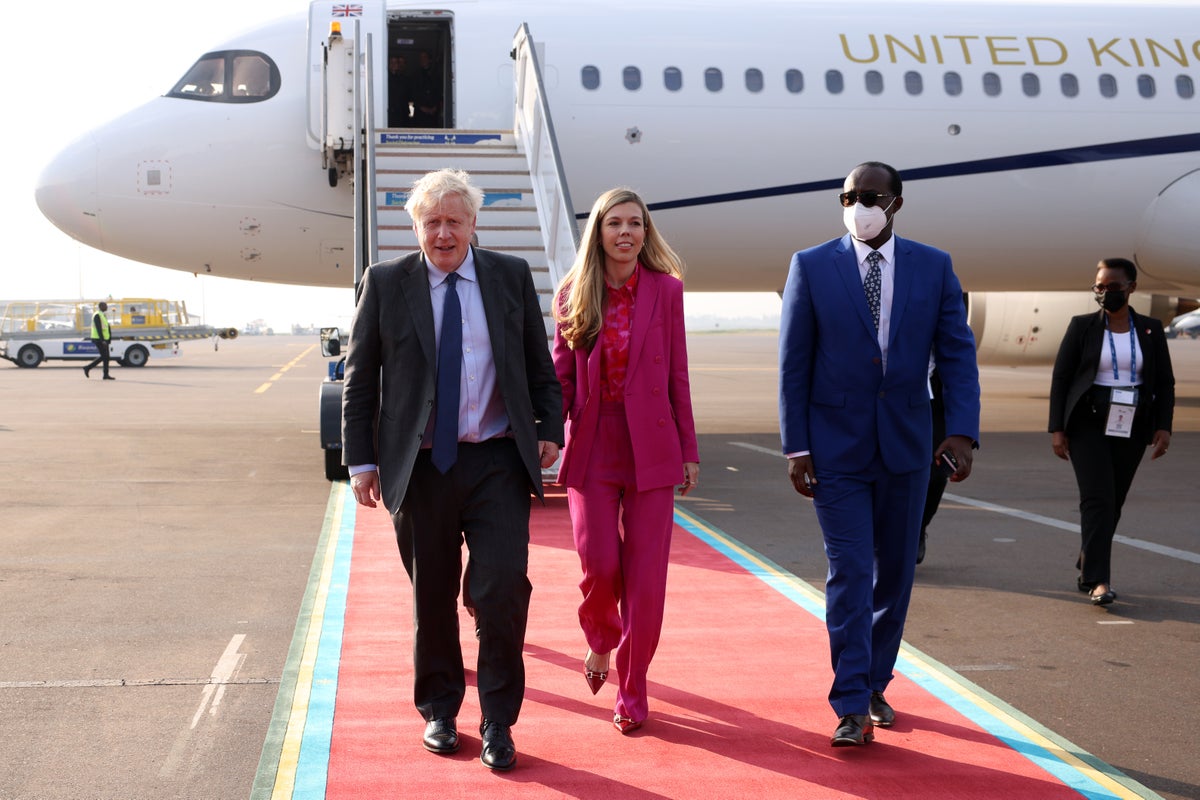 Oris Johnson landed in Rwanda ahead of a Commonwealth leaders’ summit that was overshadowed by the UK’s controversial new immigration policy.

The Prime Minister tweeted Thursday morning: “I arrived in Rwanda for CHOGM to address global challenges, from hunger to climate change, and to boost trade with some of the fastest growing economies in the world. With our shared values, history and language, the Commonwealth is a unique and vital association.

The Prime Minister, who flew to the African country’s capital, Kigali, for the Commonwealth Heads of Government meeting overnight, has come under fire over the government’s plan to send asylum seekers to Rwanda from of Great Britain.

Ahead of his flight on Wednesday night, he denounced “condescending” opponents of the project, telling reporters his trip is an opportunity “for all of us to see for ourselves what this partnership has to offer”.

He added, “Let’s hopefully help others get rid of some of their condescending attitudes towards Rwanda and how this partnership might work.”

But Mr Johnson has no plans to visit accommodation in Kigali for migrants arriving by unauthorized means in the UK.

A spokesperson for the Prime Minister said: “You know the Prime Minister’s time is always limited and to make time to do that, he should therefore leave elements of the program in which he works with a unique set of world leaders on very crucial issues.”

“We think the best use of his time during this short time that he is in Rwanda is to focus on some of the issues that will be raised at the summit and to work with other world leaders on some of these issues that we we talked about, including Ukraine and global security.”

The first flight deporting people to Rwanda was due to take off last week, but was founded by successful legal challenges ahead of a full hearing on the legality of the scheme in British courts.

The policy is part of a £120million economic deal with Kigali, but has been widely criticized in part because of concerns about Rwanda’s human rights record.

Mr Johnson noted he would get there before any asylum seekers despite signing the agreement two months ago.

“I am aware that I come before anyone who has traveled illegally across the English Channel, I cannot hide that fact from you – I have – but it is still true that no UK court and no international court has ruled on our illegal plan,” he said.

But Mr Johnson said he would “no doubt” discuss the plans with Rwandan President Paul Kagame on Thursday.

Mr Kagame has been praised for his role in ending the 1994 genocide which saw Hutu extremists slaughter around 800,000 Tutsis and moderate Hutus during 100 days of civil war.

But his regime has since been accused of political repression, alleged assassinations and the imprisonment of critics.

Amnesty International UK’s Refugee and Migrant Rights Director, Steve Valdez-Symonds, said: “With their cruel and unlawful refugee agenda, the Prime Minister and Home Secretary are effectively supporting the continuation of the repression of people in Rwanda under the regime of President Kagame.

“The UK should use its influence and the opportunity of Commonwealth Leaders’ Meetings to encourage meaningful progress on human rights in Rwanda, without seeking to excuse and potentially add to Rwanda’s worrying human rights record. human rights.”

Mr Johnson’s spokesman said he should ‘raise human rights issues as he has done in the past’.

“We want Rwanda to uphold and uphold Commonwealth values, democracy, the rule of law and respect for human rights. And we want due process for all those in detention and fair and proper enforcement. transparency of the rule of law,” he added.

The Prime Minister’s wife, Carrie Johnson, will join him at the summit and is expected to take part in a program of partner events.

Foreign Minister Liz Truss will also attend, as will Alok Sharma, the chair of the Cop26 climate summit.

The Prime Minister also wants to take advantage of the reunion of the 54 nations, which are mostly former British colonies, to combat food and energy insecurity caused by Russia’s invasion of Ukraine.

“Commonwealth countries are on the front lines of many of these issues, from climate change to rising food prices,” its spokesman said.

Green economic growth, promoting girls’ education and working with the Commonwealth to increase trade and job creation for UK businesses are also high on No 10’s agenda.

‘Join us in California’: Newsom targets GOP in Florida