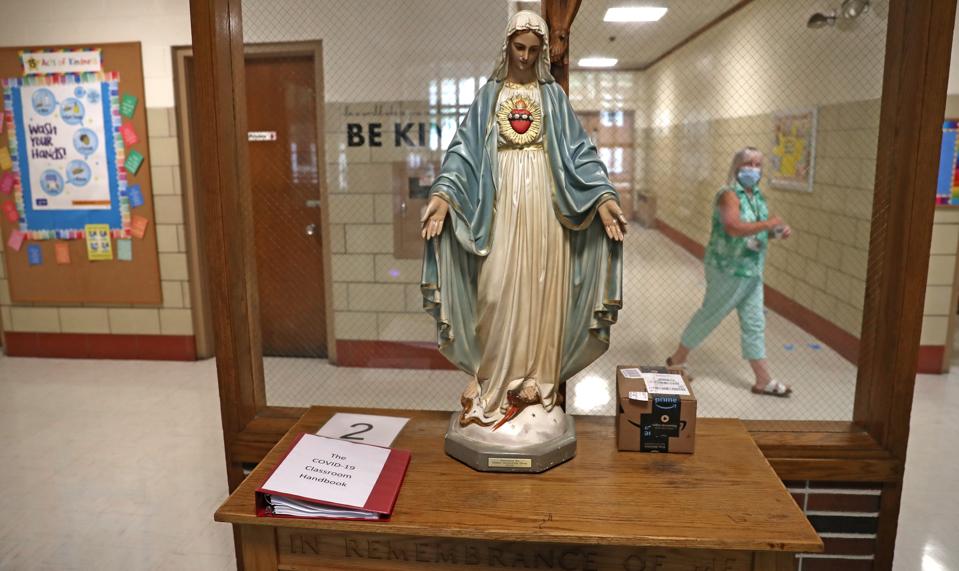 If you had to learn about the Habsburgs (the royal house that ruled much of the European continent for most of a millennium), who would you want as a teacher? An Ivy League history teacher? A docent from Schönbrunn Palace in Vienna?

And one of the Habsburgs themselves? Believe it or not, this is what students at a new Catholic school in Boston will have the opportunity to do.

The Lumen Verum Academy (Latin for “True Light”) is slated to open in the fall of this year and will present an educational model designed to provide unique learning opportunities for its students. Students will work from home on Mondays, Tuesdays, Thursdays and Fridays and participate in on-site activities on Wednesdays and Saturdays. The distance learning component will allow guest lecturers to teach units of particular interest, and that’s where Eduard Hapsburg comes in. He is the Hungarian Ambassador to the Holy See, the great-great-grandson of Emperor Franz Joseph, and will teach a course to students of Lumen Verum.

Speaking of last year, Tom Carroll, the Superintendent of the Archdiocese of Boston, cited the opening to A tale of two cities, “It was the best of times, it was the worst of times.” When the coronavirus first took hold in the region in March 2020, schools were immediately closed and enrollment plummeted. At the end of the school year, the Archdiocese was forced to carry out the most serious series of school closures in 50 years, closing nine schools.

But then the summer came and went and it became time for the students to go back to school. While local districts have announced that they will not be reopening face-to-face teaching, according to Carroll, Catholic school phones “have started ringing.

The Archdiocese decided to open its schools entirely in person for two reasons. First, they felt a moral imperative to serve students, even if it meant taking risks. They worried about the environments students would be in outside of school and believed they could do a better job keeping students safe. This trust is the second reason they opened. As Carroll said, “if there’s one thing Catholic schools are known for, it’s getting kids to follow the rules.” Mitigating risk during a pandemic is all about following rules and they both believed that they could get students and teachers to follow the proper protocols and that it was very unlikely that many students would follow such strict guidelines. outside of school. School was the safest place for them.

When it became clear that they would be open and had a plan to keep students and teachers safe, enrollment began to increase. After predicting a drop of 5,700 students for the 2020-2021 school year (17% of the student body), they actually saw an increase of 4,400 students, almost completely offsetting recent declines in enrollment. Moreover, it appears that many of these families will remain even after the pandemic subsides.

One of the reasons Carroll is confident that the schools of the Archdiocese will continue to thrive is their commitment to the great literary works and classics of Western thought. He wrote a now-viral tweet in December in response to a Wall Street Journal article about a Massachusetts school ban. The odyssey, saying, “Any public school that has decided to ban the classics can donate their books to Catholic schools in the Archdiocese of Boston.” Let our students benefit from your censorship. Please contact me to organize donations. He believes that schools in the Archdiocese expose students to great thinkers and great thoughts and teach them to think about important topics, without trying to tell them what to think or shield them from uncomfortable conversations.

The Archdiocese is also innovating. As Carroll said, “rather than closing schools, we want to open them”. Lumen Verum is a major step towards achieving this. The virtual component will allow a better personalization of the teaching according to the needs of the pupils, the pupils being able to operate at their academic level, even if this level varies from one subject to another. This will also allow for exciting guest lectures and instructors, like the Habsburg Ambassador.

But just as important is the in-person part of the school program. It will be faith-based, with days beginning with Mass or Eucharistic adoration, and physically engaging, with outdoor activities and sports playing a big part. He plans to take advantage of the incredible field trip opportunities in the Boston area. The school will also host optional evening social events for students and families to deepen their connection to the school community.

Tuition is expected to be $ 14,750 per year, less than three-quarters of the average tuition fee for Catholic high schools in the Boston area.

The Archdiocese of Boston has a long and proud history of Catholic education. If you speak to Tom Carroll, it is clear that the Archdiocese also has a vision for its future.

How LifeTown, a simulated New Jersey town, is helping children with autism