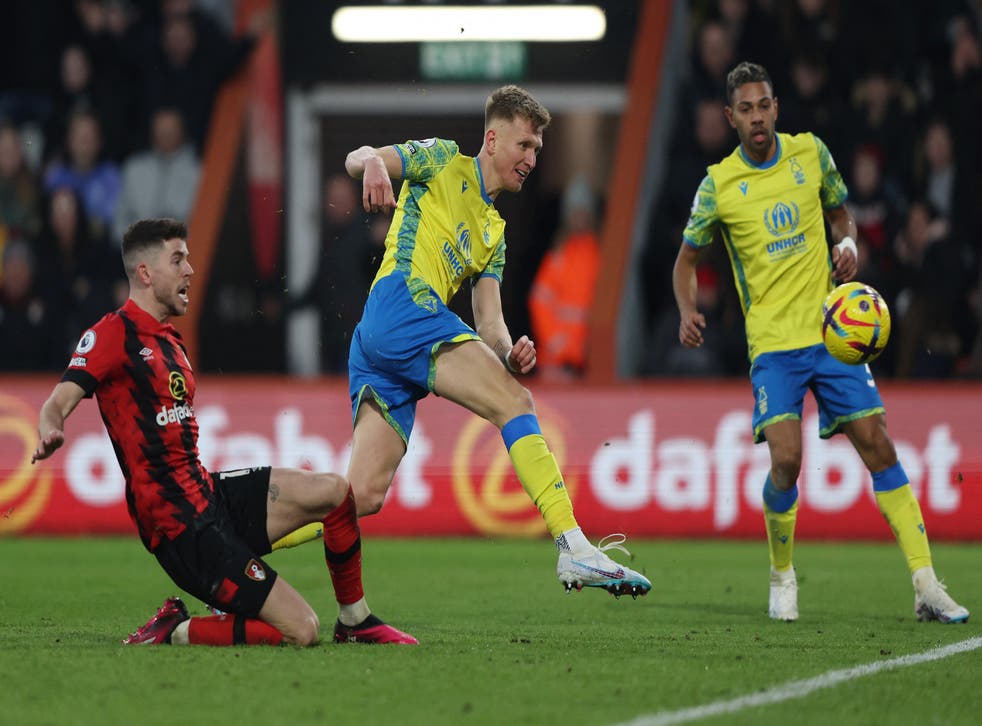 Follow live coverage of Bournemouth against Nottingham Forest in the Premier League today.

New Zealand international Wood, who was on loan from Newcastle on Friday, replaced Gustavo Scarpa, while Wayne Hennessey came on for Henderson and Willy Boly was preferred to Scott McKenna.

We’ll bring you all the action and updates from today’s game in the live blog below:

That’s all for today, goodbye.

Next, Bournemouth travels to Brighton and Hove Albion in the Premier League, where Forest hosts Manchester United in the EFL Cup.

Substitute Surridge scored his first Premier League goal against his former club to salvage a draw against Bournemouth. Yates thought he had put Forest ahead early on when he tapped in Boly’s header in front of goal, but it was disallowed after a VAR check with the Wolves defender offside. Moore then went to Bournemouth before Anthony broke the deadlock. The winger raced on Ouattara’s low cross and got ahead of Worrall before sliding his shot into the bottom corner. They could have had another second before the break, but Moore’s effort was saved by compatriot Hennessey, after which Zemura’s rebound was kicked off the line. After the break, Neto denied Johnson with a low stop before Surridge scored the equaliser. Johnson was the provider and flashed the ball across the penalty area with the striker poised to tap it in from close range. After a VAR check for possible offside, the goal was awarded.

Anthony cuts in from the right before curling a cross into the penalty area. It is cleared to Ouattara who has blocked his shot. He went wide, but the ball is alive in Forest’s half.

Lodi clips the ball to the left of the box to Gibbs-White. He reaches to keep it on the field and throws it back at Johnson, who takes it wide.

Anthony’s free kick on the edge of the penalty area hits the wall. Williams looks for Gibbs-White at the break, but the pass is intercepted.