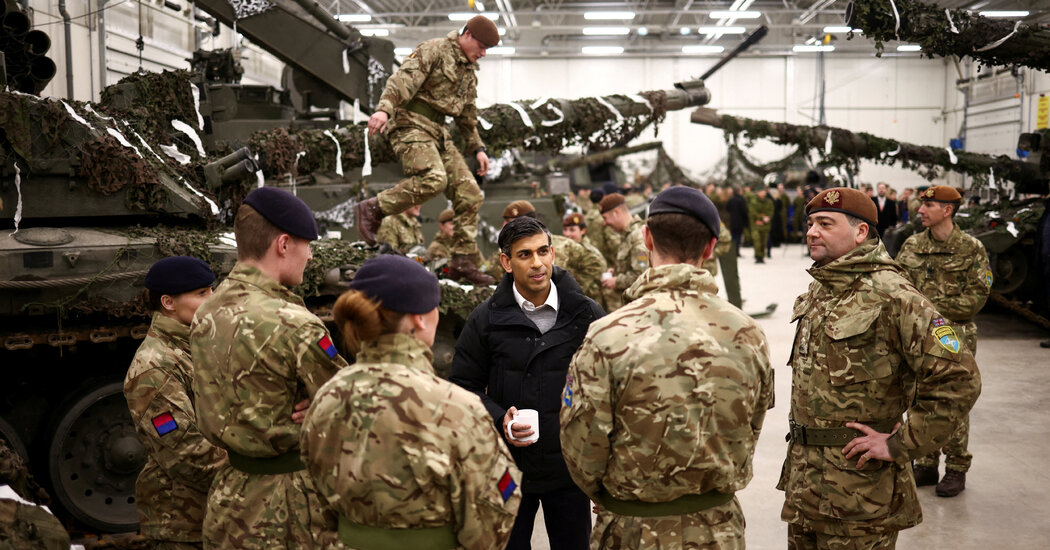 By promising to send a squadron of tanks to Ukraine, Britain is leading Western allies to speed up the delivery of modern weapons for Kiev’s war effort as fears mount that Russia will soon launch a new offensive.

This week, British Foreign Secretary James Cleverly will visit the United States and Canada to discuss how the three nations could coordinate even more closely on sanctions against Russia and military aid to Kiev. Defense Minister Ben Wallace is going to Estonia and Germany to meet with NATO members and other allies.

The meetings come on the heels of Britain’s announcement on Saturday that it would be sending a squadron of 14 Challenger 2 tanks to Ukraine. Just months ago, such aid was considered taboo for fear it would incite Russia to escalate the war. But as Ukraine persisted in its demand for weapons and made progress on the battlefield, its allies have been acceding to more and more of its requests.

“They have finally accepted that this is going to be a long war unless they step in with even more resources to hasten a Ukrainian victory,” said Mick Ryan, a military strategist and retired Australian Army major general who is attached to the Lowy Institute. a research institute.

See also  UKTN Deals: Products to spoil you with

NATO Secretary General Jens Stoltenberg said that following Britain’s commitment to heavy hardware, “I expect more in the near future,” according to an interview with Germany’s Handelsblatt newspaper published Sunday.

Britain’s Prime Minister Rishi Sunak said the aid was urgently needed to enable Ukraine to take advantage of Russia’s falling behind on the battlefield due to supply problems and declining morale. Mr Sunak has also tried to use the announcement to polish Britain’s credentials as a leading supporter of Ukraine’s war effort.

“As the people of Ukraine approach their second year of life under relentless Russian bombing, the Prime Minister is committed to ensuring Ukraine wins this war,” a Downing Street spokesperson said in a statement on Saturday, adding that Mr Sunak believed “ that a long and static war only serves Russia’s goals.

Mr Sunak said that Ukraine’s allies should deliver as soon as possible all the aid, both diplomatic and military, that they plan to give Ukraine this year. Britain has said that by 2023 it plans to match or exceed the aid it provided to Ukraine last year.

Concerns about a new Russian offensive have risen, and a Western analyst and former NATO official, Camille Grand, said Moscow appeared to be mobilizing hundreds of thousands of new conscripts, which he said had accelerated discussion about supplying tanks to Ukraine.

Kiev has been advocating for Western tanks to complement those Soviet-era and Russian-made tanks that were in Ukraine’s stockpiles or supplied by other countries in Eastern Europe almost since the beginning of the war. Those tanks wear out quickly after months of combat.

Britain’s announcement was expected to ramp up pressure on Germany to commit to sending its coveted Leopard 2 tanks to Ukraine, or at least allowing other European countries that have those German-made tanks to to give them to Ukraine. The Polish government said last week it wanted to give Ukraine some of its German-made tanks, though Berlin would have to allow it.

Mr Sunak’s office said the tanks would enter the country within weeks and more deliveries of arms and ammunition were expected to follow.

Britain will begin training Ukrainian troops on the tanks and guns in the coming days, the prime minister’s office said. Thousands of Ukrainian troops have been training in Britain for the past six months. Mr Wallace, the Defense Secretary, will give further details of Britain’s support for Ukraine in the House of Commons on Monday.

Russia downplayed the importance of the new equipment. Kremlin spokesman Dmitri S. Peskov said Monday that Western armored vehicles “can’t change anything” on the battlefield. “These tanks are burning well and will continue to burn,” he said, according to the state-run Tass news agency.

The post Britain is leading a push for more Western military aid to Ukraine, and soon. appeared first on New York Times.