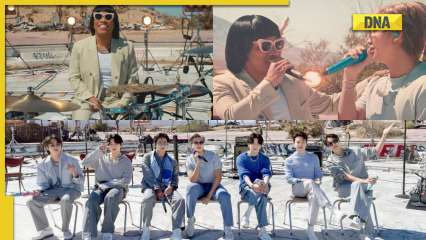 All 7 stars were seen seated in the middle of the desert for the live show. Jungkook started the show with Born Singer, a remake of the J. Cole track. ARMY was surprised when Anderson. Paak joined the Bangtan Boys as a special guest. He was seen sitting behind the battery. The event was filled with so many surprises as the BTS members not only sang for them, but also talked about their past.

J-Hope, the first to share, said that the day BTS was born is his fondest memory. Meanwhile, Jimin recalled his first concert and said that BTS concerts hold a special place in his heart. Talking about their latest release Proof, Jin mentioned, “We wanted to put everything together in one album with Proof, so ARMY could listen to everything at once.”

V added, “That concludes the first chapter. It was fun listening to old songs, unreleased ones. J Hope said: “We should stick together and keep doing a good job.” Speaking of COVID-19, RM said, “Things didn’t go as planned and expected.”

Read: BTS’ Yet To Come gets the most views from Japan and India on YouTube

One of the social media users, “These golden moments of BTS will always stand out in the minds of the ARMY.” The second social media user wrote, “My soul was shaking listening to their song. BTS isn’t just a name, it’s a brand. BTS this name is enough to praise, I love you so much BTS️.

The third person commented, “I can’t believe 9 years have passed and how they’ve grown from their debut to where they are now. A hug from a distance, I love you very much, happy birthday from BOLIVIA.