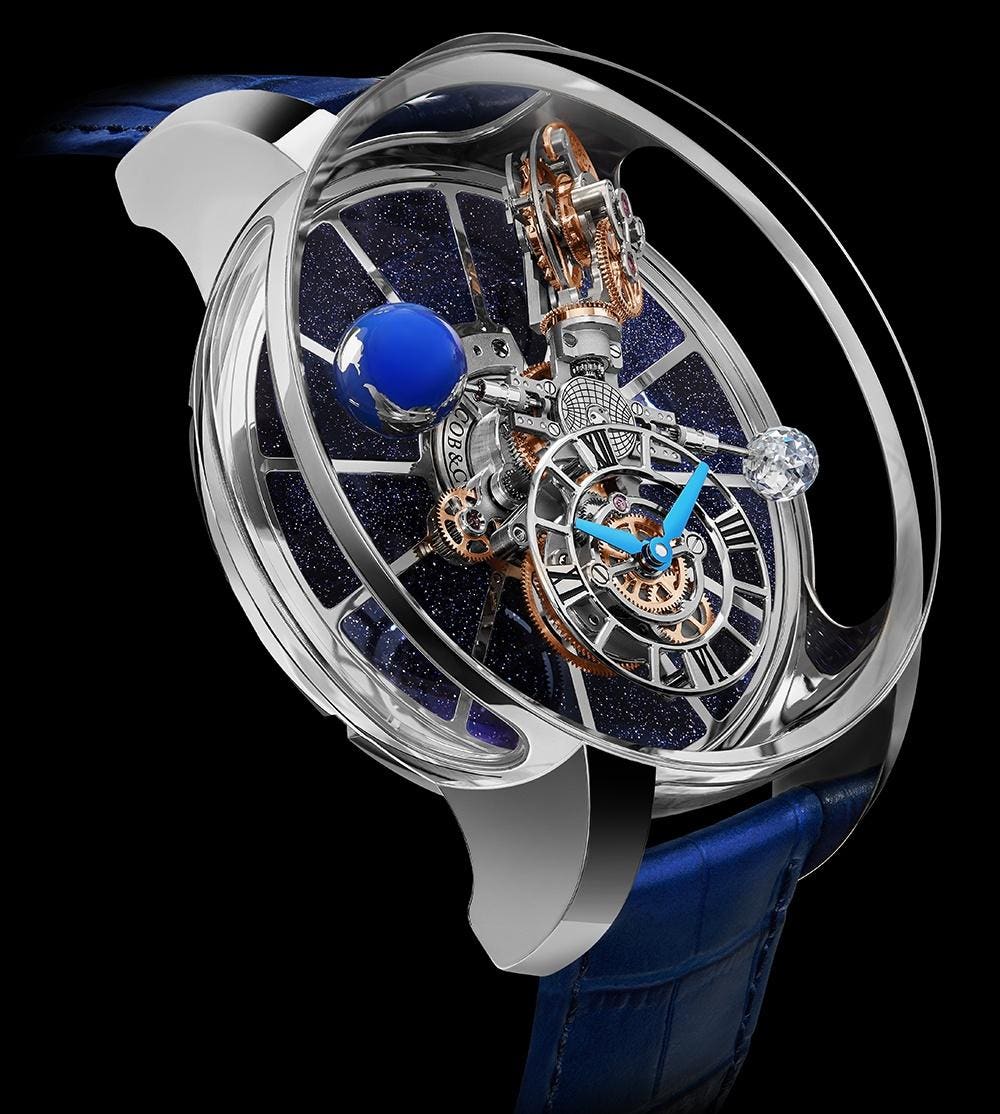 The list of watch brands with experience in space has just grown. Bucherer and Jacob & Co have teamed up to create a one-of-a-kind tri-axis tourbillon, the Jacob & Co. Astronomia Tourbillon Bucherer Blue. The watch traveled to space in April, worn by a crew member on a space mission from Kennedy Space Center in Florida, led by Axiom Space. It will be auctioned by Sotheby’s for charity this summer. Eytan Stibbe, an investor and philanthropist, was part of a four-person team that spent 17 days, one hour and 37 minutes in space, orbiting Earth 273 times at an altitude of 250 miles at nearly 17,500 mph, traveling over seven million miles in total. Stibbe wore the tourbillon during the trip, and it accurately displayed the time during launch and return to earth, enduring extremely high G-forces and also micro-gravity in space.

The dark blue starry background is meant to represent the starry night sky. The top and sides of the case are made of sapphire crystal, revealing the movement and the four satellites which rotate in constant motion: the hour sub-dial, the tourbillon cage, a spherical diamond which represents the moon and a globe lacquer representing the Earth. All are finished in the Bucherer Blue color scheme. “It seems quite normal that the Astronomia Bucherer Blue orbits the Earth”, comments the president of Jacob & Co., Jacob Arabov. “The watch had the same perspective on us that we usually have on it.”

The Jacob & Co. Astronomia Tourbillon Bucherer Blue will be auctioned by Sotheby’s in a dedicated single-lot auction on July 26, with proceeds going to charity (coming soon). It will be presented at Bucherer TimeMachine on 57e Street in New York from July 11 to 17 and at Sotheby’s in New York from July 21 to 15. The watch will be offered without reserve, with bidding starting at $1 million. A second Jacob & Co. + Bucherer collaboration, the Skeleton Epic X, is available in Bucherer stores. He hasn’t been in space.

“The worst version” of COVID is spreading. Can we update our vaccines on time?