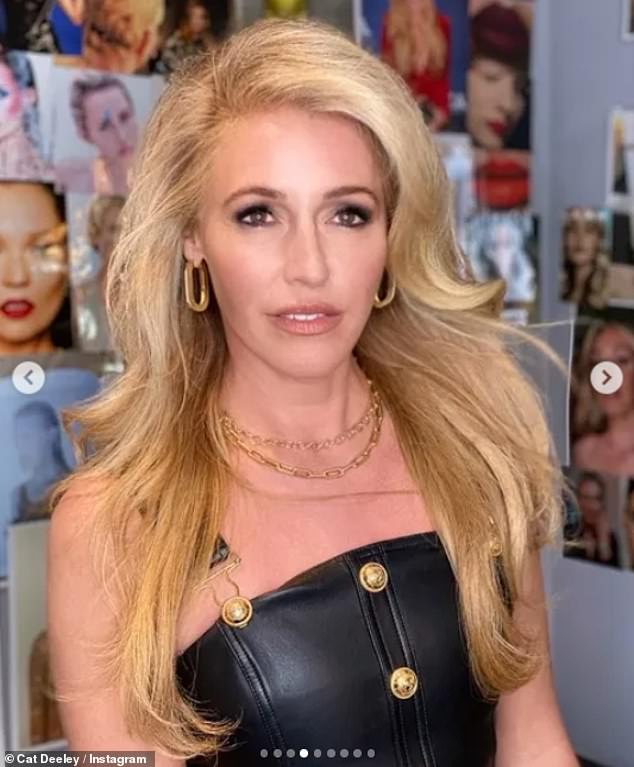 Cat Deeley, 45, looks unrecognizable as she flaunts her age-defying look in a leather mini… but admits it’s all about ‘filters and a team of people’

By Joanna Crawley for UKTN

She joked about her return to glamor after “three long years of sweatpants, no makeup and mommy buns”, with the new season of So You Think You Can Dance.

And Cat Deeley showed off a stunning new look as she prepared to host the American talent show’s final episode on Wednesday night.

The British beauty, 45, drove fans wild with her age-defying look as she posed in a racy leather mini dress.

Unrecognizable: Cat Deeley showed off a stunning new look as she prepared to host the latest episode of US talent show So You Think You Can Dance on Wednesday night

‘You look so different!!!! Barely recognized her,” one follower wrote as Cat donned a figure-hugging black dress and revealed she was inspired by Cindy Crawford.

Cat showed off her gorgeous figure in the thigh-skimming number that revealed her toned pins as she posed up a storm.

She wrote in her Instagram caption, “Today’s #SYTYCD look!” ✨ Inspired by 90s Supers and this @Versace show! Channeling my inner @CindyCrawford, @HelenaChristensen, #KarenMulder and even a little #GeorgeMicheal ‘Freedom’ too!!! X’ 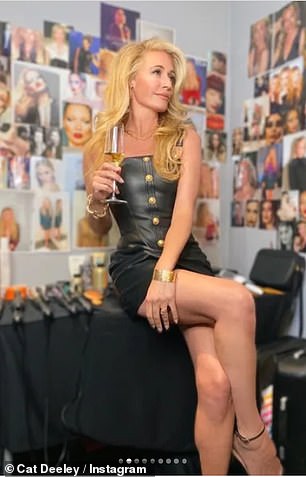 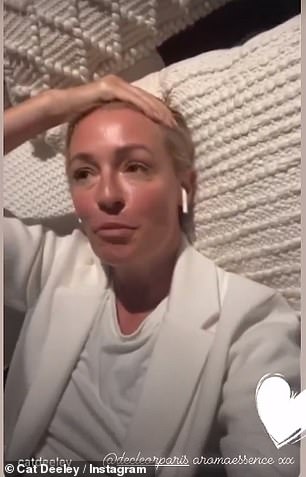 Work it! The presenter, 45, slipped into a skin-tight black dress and posed up a storm backstage as fans commented on her makeover (pictured right as she put on her makeup after filming)

This black dress with a curly bodice and sleek skirt has become iconic over the years and even Cindy’s daughter Kaia wore a mini version of the dress for her 18th birthday in 2019.

Although it was model Christy Turlington who first wore the dress on the catwalk in the fall 1992 Versace show. 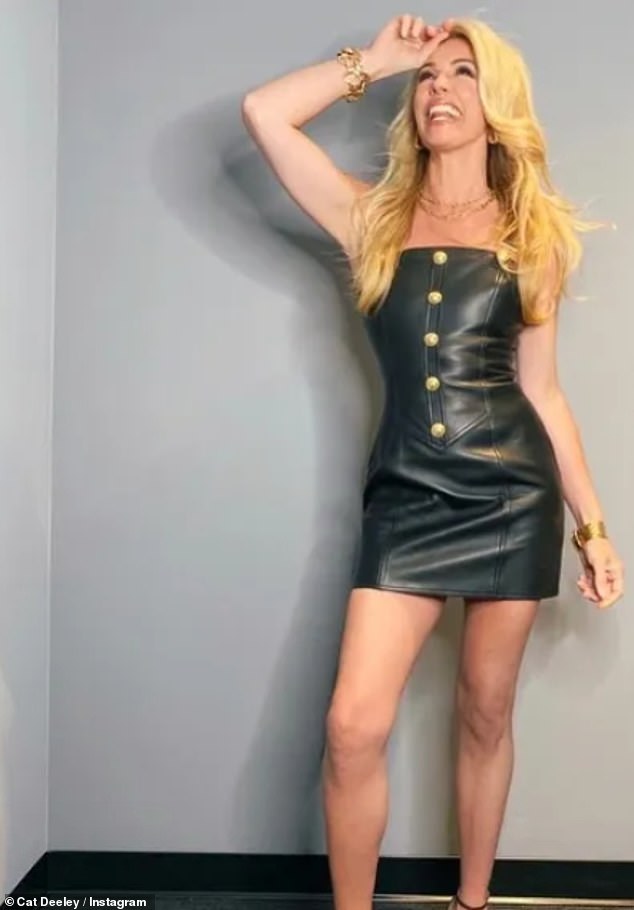 Confident: Cat showed off her gorgeous figure in the thigh-skimming number that revealed her toned pins as she posed up a storm 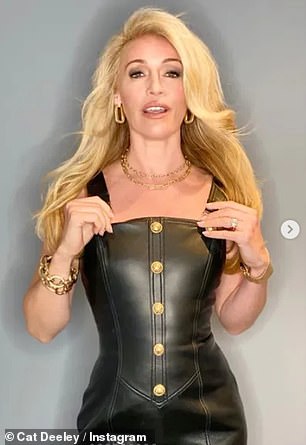 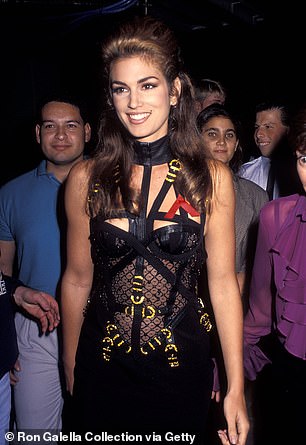 Stunning! Cat (left) channeled Cindy Crawford (right in 1992) as she was inspired by THAT famous Versace bondage dress for her latest So You Think You Can Dance outfit 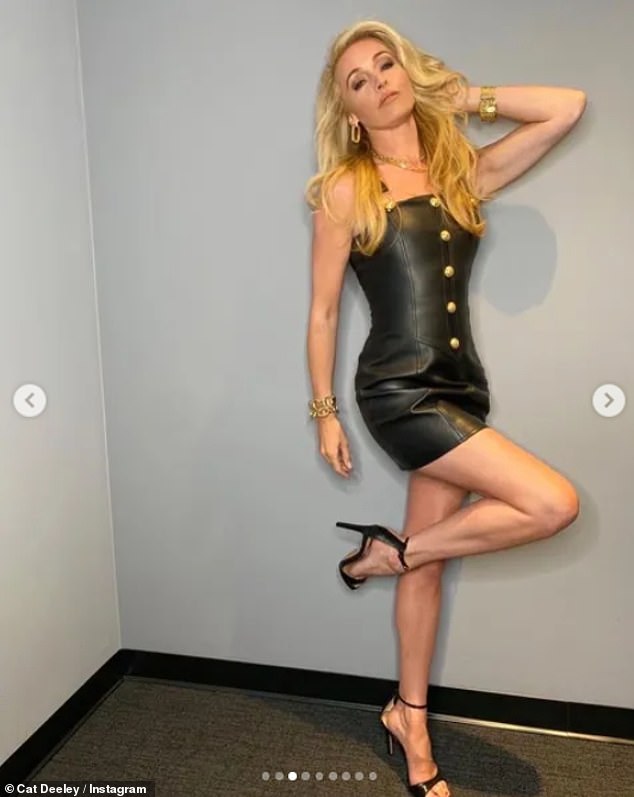 The look: The dress featured strap detailing with gold ties reminiscent of Cindy’s Versace dress and was paired with towering black heels

Cat was keen to point out that her makeover was due to “filters and a team of people.”

Posing after the show sans makeup, the presenter explained, “I thought I’d give you all a little break from all the glamor for a second!”

“It takes a team of people to make me look like ‘the host’ and I can’t thank them enough!” And while yes, filters can be so much fun, here’s a quick reminder that they’re not real… X’ 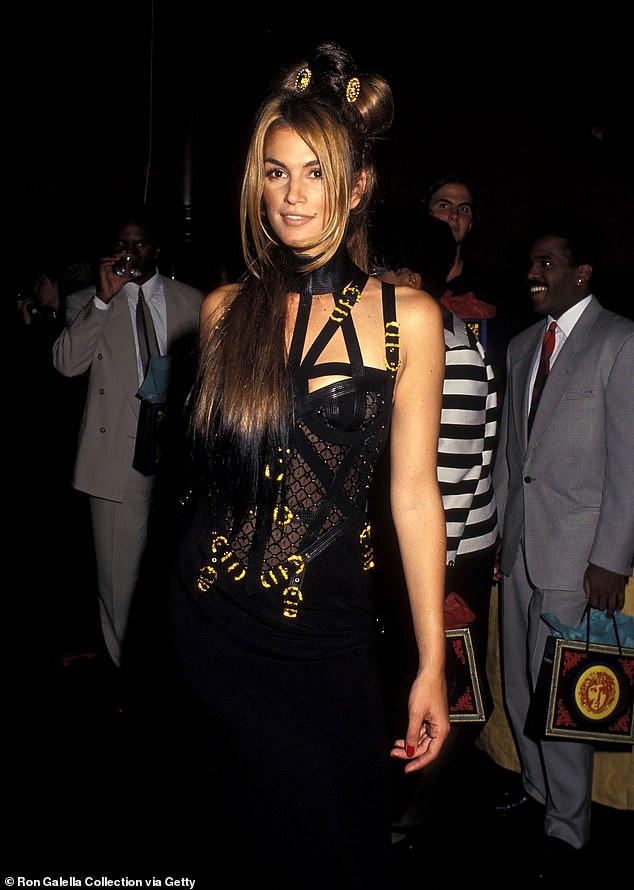