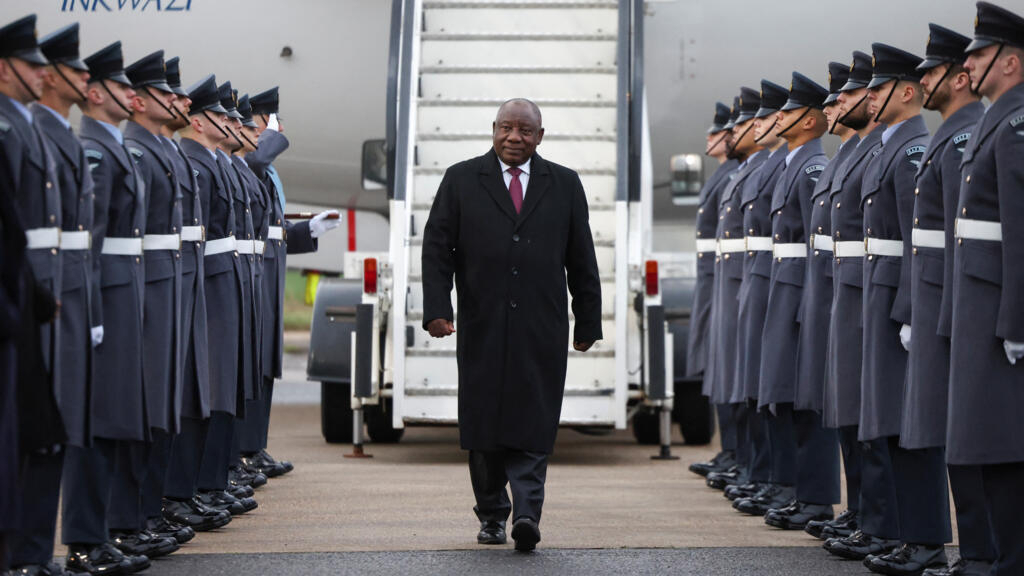 King Charles III will receive South African President Cyril Ramaphosa from Tuesday for his first state visit since taking the throne following the death of his mother, Queen Elizabeth II. The three-day trip will be dedicated to “celebrating cooperation” between South Africa and its former colonial power.

While South Africa is the UK’s largest trading partner on the African continent, it is “one that has too often been taken for granted,” writes Christopher Vandome, a Senior Research Fellow at Chatham House’s Africa Programme. It is therefore quite significant that King Charles III’s first state visit will be to meet South African President Cyril Ramaphosa and his wife Dr. Tshepo Motsepe from Tuesday to Thursday.

The British High Commissioner for South Africa, Antony Phillipson, announced the visit, saying: “This will be the first state visit to be organized by His Majesty. It reflects the importance of the relationship between South Africa and the United Kingdom. The visit provides an opportunity to celebrate our modern partnerships that bring prosperity and security to both countries, and to explain how we can work together bilaterally and globally to strengthen those ties for the future.”

South Africa was of symbolic significance to Queen Elizabeth II. She gave a speech there in which she pledged her life to the service of the Commonwealth as a 21-year-old princess. Charles III himself visited South Africa on numerous occasions and attended Nelson Mandela’s funeral in 2013. Only time will tell what kind of relationship this new monarch, who has already met several African leaders, including Nigerian President Muhammadu Buhari and Ghanaian Nana Akufo-Addo, will have with the continent after this first state visit.

‘Where South Africa is going, other countries will follow’

Queen Elizabeth II had organized this visit, which was postponed due to the Covid-19 pandemic, due to “the difficult position she was in with regard to the Commonwealth,” explained Mario Aguilar, professor of religion and politics at the University of St. Andrews who has expertise in South African politics. At least six Caribbean countries: Belize, the Bahamas, Jamaica, Grenada, Antigua and Barbuda, and St. Kitts and Nevis earlier this year expressed their desire to become republics and depose the queen as head of state.

South Africa left the Commonwealth in 1961 only to rejoin in 1994. According to Aguilar, the late Queen’s purpose with this visit was to encourage South Africa to continue to be part of the association of nations. The country has played a central role in the African Union since Mandela took office and exerts considerable influence over other African countries. As Aguilar explains, “where South Africa goes, other countries like Nigeria, Kenya and so on follow”.

Yates says Elizabeth II had hoped to “maintain good relations with South Africa because as head of the Commonwealth she viewed each member as important and may have been concerned about the possibility that the war in Ukraine might alienate Johannesburg”. He adds: “The British Conservative government led by (former Prime Minister) Boris Johnson supported Ukraine, while South Africa did not. The Commonwealth gives Britain the chance to maintain good relations with countries that do not support Ukraine. “

This visit marks Charles III’s first as head of the Commonwealth, a position he “lobbied extensively for during the last decade of his mother’s reign, because he believes this role allows the Crown to maintain genuine foreign policy interests,” says Yates. Following the Queen’s death, there is growing concern that the union is running its course and so Charles will certainly use this visit to “consolidate his position as head of the Commonwealth,” he added.

While Aguilar acknowledges that “it is possible that the Commonwealth could face challenges under King Charles III, there is no indication at this point that it could end up as a collaborative structure”. Yates agrees: “People are scared because Queen Elizabeth II has been the sole head of the Commonwealth and times have changed. But at the same time, Charles III spent his entire adult life preparing for this job and the Commonwealth has actually grown and even countries that are not former British colonies,” such as Togo and Gabon.

Ramaphosa will also try to consolidate his position at home. The South African leader, who succeeded Jacob Zuma as president with the promise of a clean government, is now accused of corruption. He hopes this visit will legitimize his position and that of his party, the ANC, ahead of the leadership election in December and South Africa’s 2024 general election. According to Yates, the South African Democratic Party, the opposition, increasingly popular with each election as it uses issues such as high inflation and poor energy infrastructure to “question the effectiveness of the ANC, making it more popular and presenting itself as a viable alternative”.

Ramaphosa will grant his wish by giving a 20-minute speech on Tuesday afternoon at the Royal Gallery of the House of Lords about his vision of the world for both the House of Lords and the Commons. “This is a rare honor as most state visits don’t include it,” Aguilar explained. “This is a vote of confidence in Ramaphosa, one that wasn’t even extended [French President] Macron, for example, despite the close relationship between France and the UK.”

Yates and Aguilar both agree that this visit will be about “celebrating cooperation” and that while the new king will raise the issue of war in Ukraine, there is “nothing to suggest that the visit will be uncomfortable or about Ramaphosa preaching about his attitude”. Yates says this is a smart approach as “the UK will never get South Africa to position itself with the West alone, playing a double game in aligning itself with both Russia and the West”. Russia has been a longtime ally of the ANC, supporting it in its fight against apartheid in South Africa. There has also been “a lot of anti-Western rhetoric coming out of South Africa lately as the country believes the West is behaving imperialistically by expecting African countries to walk the line” regarding the war in Ukraine.

South Africa, like 16 other African countries, recently abstained from voting on the UN resolution condemning Russia’s invasion of Ukraine. In addition, Ramaphosa refused to condemn the invasion of Russia. South Africa is part of the BRICS group, comprising Brazil, Russia, India, China and South Africa, countries recognized as the world’s leading emerging market economies. While the February 24 Russian invasion resulted in widespread condemnation from the G7 countries and their allies, Brazil was the only BRICS country to support the UN resolution. South Africa, China and India abstained.

The UK will also be keen to strengthen ties with a key trading partner at a time of economic turmoil. As of 18 November 2022, total trade in goods and services between the UK and South Africa was £10.7bn (€12.3bn), up 6.3% from 2021. Developing those ties further will be high on the agenda when Ramaphosa meets Prime Minister Rishi Sunak on Wednesday. Britain’s new prime minister hopes to extend the trade deal between the two countries to include lower tariffs to help fight the UK’s financial crisis.

“South Africa is already the UK’s largest trading partner on the continent and we have ambitious plans to jointly boost infrastructure investment and economic growth,” Sunak said ahead of the visit. “I look forward to welcoming President Ramaphosa to London this week to discuss how we can deepen the partnership between our two great nations and take advantage of shared opportunities from trade and tourism to security and defense.”