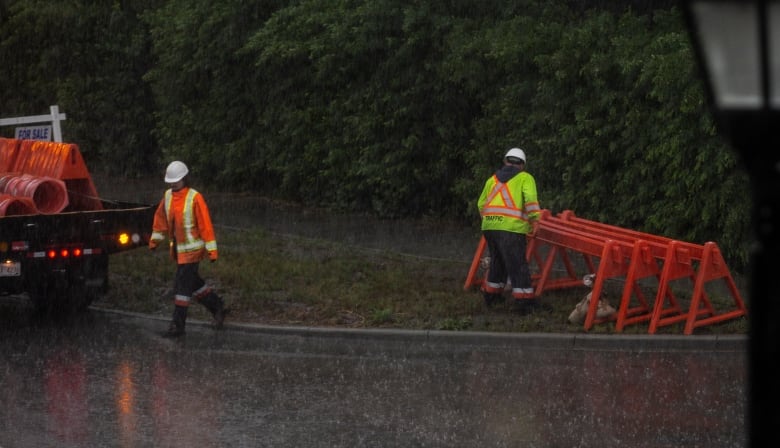 The City of Calgary has announced a local state of emergency in response to heavy rains.

The special order went into effect at 3:59 p.m. Monday.

At a news conference, Calgary Mayor Jyoti Gondek said the special order allows police and fire departments to go door-to-door in the event of an evacuation, gives the equips the city’s water utilities with property access to protect critical infrastructure and enables the city to quickly secure supplies when needed.

In a warning issued Monday morning by Environment Canada, the agency said prolonged and heavy rain events will bring 75 to 125 mm of rain by Wednesday morning in the Calgary area. In some areas, rainfall totals of 150mm or more are possible, the agency said.

Gondek stressed that the declaration of the ordinance was made as a precautionary measure and that the precipitation projections and water levels remain lower than in 2013, when the downtown area and other parts of the city were been flooded.

See also  The 1,000 witnesses on the January 6 panel: From Trump aides to rioters

Chief Susan Henry of the Calgary Emergency Management Agency said any potential evacuations will depend on how weather conditions change over the next few days.

Bowness and Sunnyside, which border the Bow River, are the Calgary neighborhoods most at risk from high flows, Henry said.

She added that river conditions will continue to be monitored, with peak water flow on the Bow River expected Wednesday evening and the highest water levels expected in Calgary on Thursday.

Due to the construction of a temporary berm, a portion of Memorial Drive will be closed to traffic beginning Monday at midnight between 10th Street NW and Edmonton Trail NE

Henry urged Calgarians to exercise caution as forecasts and river conditions will continue to change rapidly.

Assistant Deputy Chief Brian McAsey of the Calgary Fire Department said it was not safe for Calgarians to be on the Bow or Elbow Rivers, or near the banks.

“Right now the water is extremely murky, so [it’s] not very clear, you can’t see inside. It’s also extremely bloated, [on] these two shores. And so that means the riverbank is not a safe place for you.”

Francois Bouchard of the city’s water resources department said preparatory measures, such as lowering water levels in Glenmore Reservoir, have been in place since the city began monitoring the weather system. last week.

Bouchard added that while the Elbow and Bow rivers are expected to experience higher flow levels, the Bow River poses a greater flood risk to the city. Current projections show more precipitation over its watershed.

If Calgarians choose to put sand on their property, the city advises building a wall about 30 centimeters high and six meters long, which requires about 100 sandbags. Contact your local landscaper or home building supply company for sandbag material.

The city also released a map showing the areas most likely to be affected by flooding.

At a press conference in Edmonton on Monday, Lisa Jackson, executive director of environmental emergency management for Alberta Environment and Parks, said experts are analyzing the data to determine who could be affected and who is at risk in the province. .

“We’re seeing a significant rain event. We’ve seen it on radar before, and it’s starting to move over the eastern slopes,” Jackson said.

She said a complicating factor is above-average snowpack at higher elevations.

“We’re just working with communities to help understand what those impacts would be if it resulted in those levels,” she said.

Environment and Parks has also set up its departmental coordination center to help manage the situation as it develops.

“I know this is a tense time for many Albertans – this is especially true for communities that were at the center of the devastating floods of 2013,” Jason Nixon, Minister of Environment and Human Resources, told reporters Monday. Parks.

“While I realize it will be especially difficult for residents of Calgary, High River, Canmore and other communities flooded in 2013 to have a flood warning or flood watch in place, please know that Alberta is better prepared than ever for high river events.”

He said since 2020, Alberta has added more than 1,500 kilometers of new and updated flood mapping, more than the previous 30 years combined.

Nixon said he spoke with municipal leaders in Sundre, located about 110 kilometers northwest of Calgary, and Mountain View County, as well as other rural municipal leaders. Provincial officials have also spoken with the City of Calgary and municipal associations.

“While municipal governments typically respond to flooding and other local emergencies through the Alberta Emergency Management Agency, the Government of Alberta stands ready to assist with the response, if needed,” said said Nixon.

He encouraged Albertans to cooperate with local authorities if it was necessary to evacuate areas of the province. He also recommended people download the province’s river app and Alberta’s emergency alert app to keep up to date with developments.

“A recurring theme in every emergency that Alberta has faced is: We are in this together. We will work together. We are resilient people and we support our neighbours.

On Monday afternoon, the town of Canmore, located about 100 kilometers west of Calgary, said it had activated its emergency coordination center and was monitoring flow levels at Cougar Creek and the Bow River.

He has also prepared sandbags for flood protection, which can be picked up at the Public Works Building parking lot at 100 Glacier Drive.

A flood warning issued by Alberta Environment for the Bow River in the town of Banff was downgraded to a flood watch on Monday afternoon, reflecting lower-than-expected rainfall for the area. Emergency personnel deployed temporary blockades near Birch Avenue and the Banff recreation grounds.

A walk among the giant presidential heads