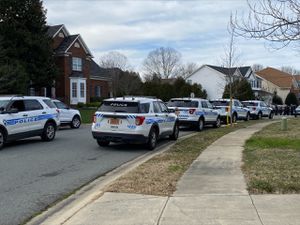 Charlotte-Mecklenburg police are on the scene of a shooting involving officers in the University City borough.

At around 1 p.m., officers said they went to a residence on Billings Park Drive to serve a warrant.

Police said as officers prepared to execute the warrant, multiple 911 calls came in reporting threats and a possible domestic violence assault with a deadly weapon in the same residence.

“It sounds like whatever was going on has escalated,” Deputy Chief Tonya Arrington said.

Officers on the scene then saw an armed suspect actively shooting at the home. An officer responded to the threat by firing his weapon at the suspect who was also shooting, police said.

Police said officers then immediately provided medical attention to the injured. A firearm was found at the scene, according to police.

According to police, two people were transported to a hospital in the region with non-life-threatening injuries.

Channel 9’s Glenn Counts spoke to a neighbor who said they heard gunshots. The neighbour, who did not wish to be identified, said the whole situation stunned them.

“This is something that never happens. I’ve been here for a few years,” the neighbor told Channel 9.

No officers were injured in the incident, according to police.

The SBI will lead an investigation into this shooting involving officers. CMPD Internal Affairs will also conduct a parallel investigation.

The CMPD Homicide will lead an investigation into possible underlying crimes that led to the shooting involving an officer.

The investigation into this matter is active and ongoing. Anyone with information regarding this incident is urged to call 704-432-TIPS and speak directly to a homicide detective.