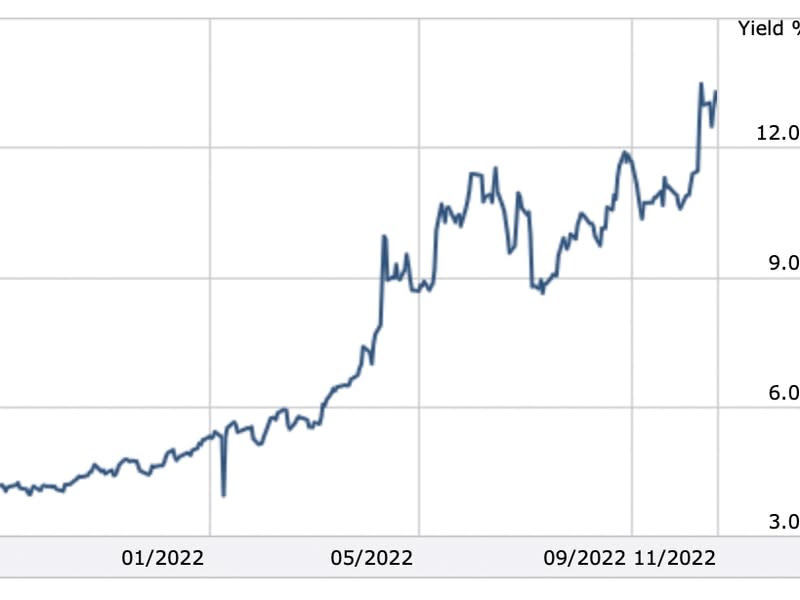 Bonds issued by cryptocurrency exchange Coinbase (COIN) and MicroStrategy (MSTR), a business intelligence firm and investor in bitcoin, have collapsed as investor confidence in the sector waned in the wake of the FTX collapse.

Coinbase’s bond due in 2031 is down 15% this month to 50 cents, according to data source Finra-Morningstar, pushing yields — which are moving in the opposite direction of price — to an all-time high of 13.5% increased. The decline comes after nearly three months of consolidation and marks a continuation of the bearish trend seen early this year. The yield on the company’s bond due 2026 rose to 17%.

Bonds tied to MicroStrategy, a business intelligence company and bitcoin holder, have taken a similar beating. On Friday, the yield on the company’s 2028 bonds, issued last year to fund bitcoin’s (BTC) accumulation, rose to 13.35% as the price fell to a record 72.5 cents per dollar. MicroStrategy has approximately 130,000 BTC worth approximately $2.08 billion on its balance sheet.

Digital asset exchange FTX, founded by Sam Bankman-Fried, filed for bankruptcy on November 11, raising concerns of a market-wide contagion. Prominent venture capital firm Multicoin, one of many exposed to FTX, told investors its net performance was down 55% this month and said the collapse of FTX would wipe out many companies in the coming weeks, according to UKTN.

“Those bond yields were actually the first sign of weakness in the space. It was the canary in the coal mine, a sign of stress in the crypto space even before all the blowouts this year,” Darius Sit, founder and chief investment officer at trading firm for crypto options QCP Capital, said. Sit said his company would keep an eye on earnings as a “possible omen of recovery”.

While Coinbase may be isolated from direct impacts of the FTX collapse, its vulnerability to other adverse effects, such as lower trading levels, could make investing in Coinbase bonds or stocks unattractive. That is certainly what many in the investing community seem to think.

Last week, Goldman Sachs maintained a sell rating on Coinbase stock and lowered its 12-month price target from $49 to $41. Shares in Coinbase are down 31% this month, finishing at $45.26 on Friday.

“If you have capital with Coinbase, do your counterparty risk assessment now,” Lawrence McDonald, the author of the popular Bear Traps report, tweeted on Sunday after noticing the spike in bond yields and the fall in stock price.