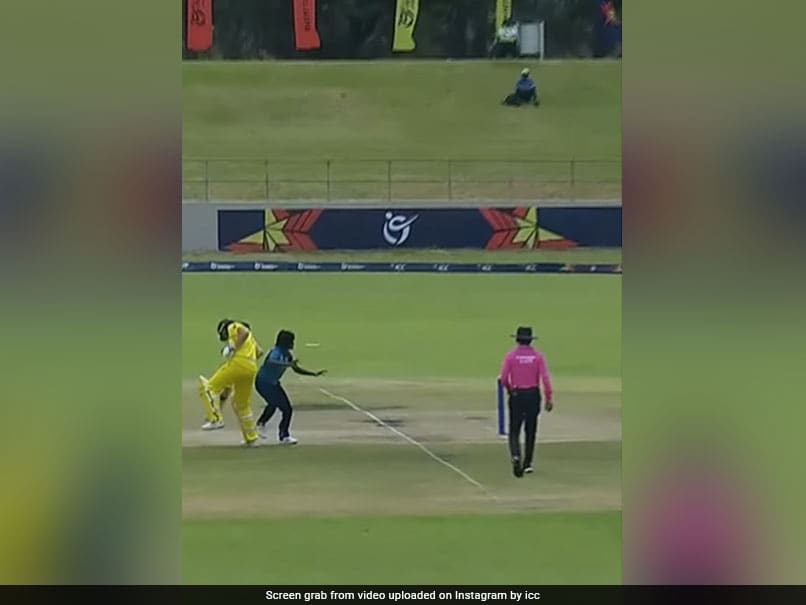 The Australia Women’s U19 team beat Sri Lanka by a huge margin of 108 runs in their previous clash of the ongoing U19 Women’s T20 World Cup. Asked to bat first, Australia posted an aggregate of 159/5, with Ella Hayward top-scoring with 36 runs. Later on, Sri Lanka couldn’t even get close to goal as Lucy Hamilton and Maggie Clark scalped two wickets and the Lankans bundled for 51. However, the match also had a controversial moment which sparked a debate over the Laws of the Game.

In the 19th over of Australia’s innings, Amy Smith unleashed a shot towards the long-off on Rashmi Nethranjalee’s pitch and singled. The ball went straight to Dulanga Dissanayake, who made a throw to the non-striker’s end. Hamilton, who was on the non-striker’s end, tried to go for a double, but aborted her plan and made her way back to the crease. However, Nethranjalee unintentionally blocked her way while waiting for Dissanayake’s throw and the ball was hit directly against stumps and Hamilton was declared a run-out.

The video quickly went viral on social media with many fans expressing disappointment at Hamilton’s bizarre dismissal, calling it “unfair”, with some of them supporting the Sri Lankan players.

“Obviously it’s not over. Clearly cheated,” commented one fan.

“Against the spirit of the game,” another fan commented.

“This is absolutely against the spirit of a sportsman.. why don’t people play fair,” another fan commented.

“But wasn’t it wrong for the bowler to try to hold the batsman to reach the crease?” one fan commented.

“It’s out… Aussie could push ’em a little bit to get to the crease,” one fan wrote.

“Bowler interfered with the non-striker. But she didn’t try to reach the crease either,” another fan wrote.

Australia Women have recorded two wins from their three appearances to claim second spot in the Group A points table. On the other hand, Sri Lanka Women have won only one match out of three and are ranked third in the points table.