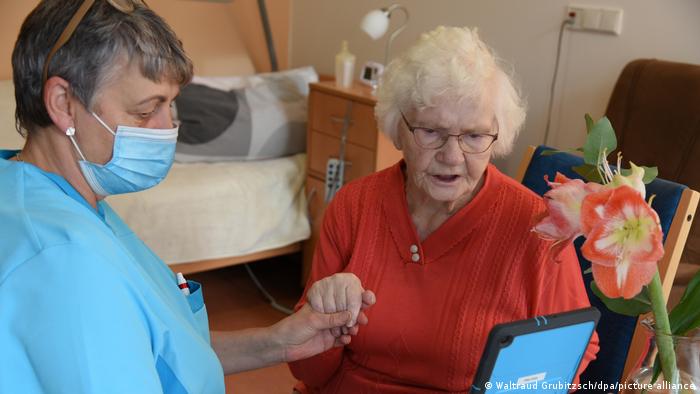 No German contract, no German health insurance. Money on hand, but not a lot. Almost three-quarters of a million women – most of them from Poland, Slovakia, Romania and Bulgaria – care for the elderly Germans, with whom they live. Without these women, there would be a care crisis. Yet, officially, they don’t exist.

It is estimated that 90% of residential accommodation work is carried out illegally in Germany. The country’s increasingly older population increasingly prefers to stay at home: three-quarters of the estimated 4.1 million people requiring daily care do so. As such, there has been a boom in demand for domestic care that successive governments have failed to regulate so far. Black market agencies continue to undermine legal ones by avoiding social security contributions and ignoring the minimum wage.

The loopholes in German law mean that the employment model of working for someone in whose house you also live has long been unrecognized, creating a ‘gray area’. However, employing a person without a contract and without contributing to social security “is a crime”, underlined the lawyer Frédéric Seebohm, who is at the head of a German professional association of nursing assistants.

The roughly 300,000 families – there are no official figures – who employ caregivers in this “gray zone” overwhelmingly understand that they are breaking the law, he said.

Changing the rules of the game

The healthcare reform recently announced by German Health Minister Jens Spahn “could be a game-changer, however,” Seebohm said. Spahn presented the main directions of the reform in October 2020, asserting that “care is the biggest social challenge of the decade”.

Although the plan has yet to be presented to parliament, the proposals in the working draft would be tantamount to acknowledging that home care is a widespread reality. And they would be a step towards regulating the sector, even if the legal basis for the work needs to be further developed.

Although many German seniors live in care facilities, a growing number prefer to stay at home

Austria is far ahead of Germany in terms of regulation of the domestic care sector. The country allows live-in caregivers to declare themselves independent. This is the case of Anna Tadrzak, a 50-year-old care worker from Poland, who finds work through the Viennese agency Caritas rundum betreut. She works two to four week shifts and then takes a break for the same amount of time.

It’s a good system, she said, because care work in practice involves being available 24 hours a day. “When the client calls you five times a night, you take care of them five times a night. . Every day is different, ”Tadrzak said. The nature and scope of the work also varies depending on the needs and expectations of families. “Customers don’t just want caregivers; they want cooks, cleaners and buyers. Sometimes you give an inch and they take a yardstick – and you can end up with no privacy whatsoever.”

The inherent difficulty in setting time and task limits means that, without regulation, social workers are vulnerable to exploitation in Germany. The business model of black market agencies depends on proximity to countries with much lower average incomes, but whose citizens enjoy free movement within the EU. Germany-based agencies partner with organizations in Eastern Europe who recruit for them, then place caregivers with German families without registering them with the local municipality, purchasing health insurance, or verifying their qualifications.

From invisible workers to critical workers

The COVID crisis has revealed an urgent need to take care work out of the shadows, said Frederic Seebohm. The abrupt closure of national borders during the spring 2020 lockdown made it difficult for “non-essential workers” – including those without German nationality or residence – to return to the country. This meant that caregivers needed to be quickly recognized as critical workers – somewhat paradoxically, given that the state had long ignored the informal majority.

READ  Covid lockdown roadmap: key dates when restrictions will end and what rules will change on May 17

It has also become imperative for healthcare workers to have access to the German healthcare system. Not only might they need medical treatment if they fell ill with COVID-19 themselves – without proper testing and access to vaccination, they would risk infecting the particularly vulnerable people they care for.

The urgency to tackle the healthcare sector in the coronavirus crisis is, however, only the tip of the iceberg. The demand for nursing staff in Germany and Austria greatly exceeds the supply. “In Austria, there will be a shortage of 80,000 to 100,000 caregivers by 2030,” said Stefanie Zollner-Rieder, specialist at Caritas, the agency with which Anne Tadrzak works. “The Austrian model works well as far as it goes – but the coronavirus has shown us that it needs to be made resistant.”

Germany has one of the highest proportions of the population over 65 in the EU. The country’s relatively low fertility rate (1.4 children per woman) and longer life expectancy (now around 79 for men and 83 for women born today) will only fuel this demographic trend. over the next decades, leaving Germany with the looming question of how to finance the ever-growing need for care.

The proposed reform, which should create a basis for strengthening financial support for people in need of care, is particularly politically relevant in Germany as preparations for the national elections in September are already underway. Even though it may already be too late for the current legislature, Frédéric Seebohm remains optimistic about the likelihood of reforming the sector, considering that a majority of parties agree on the need for change.

Closely related to the challenge of funding more care is the challenge of ensuring that this growing demand does not translate into a shift of more work to the ‘gray zone’ and worsening conditions for caregivers, especially those for carers. which the law does not yet provide.

A labor of love

In addition to highlighting the precariousness of the care sector, the COVID crisis has highlighted the importance of care work and the crucial role of Eastern European women who fill it in mass. Reform in Germany may also lead to a change in the way people perceive the value of care for the elderly.

“I put all my heart and soul into my work. It’s not all about the money – and there isn’t much of it anyway, ”said Anna Tadrzak by phone from Vienna. “It takes a lot of effort and patience, but I’m happy with how my work in Austria works, I’m happy with Caritas and my profession.” She is surprised to have received a call from a journalist. “In 15 years, no one has ever been interested in my work,” she said.