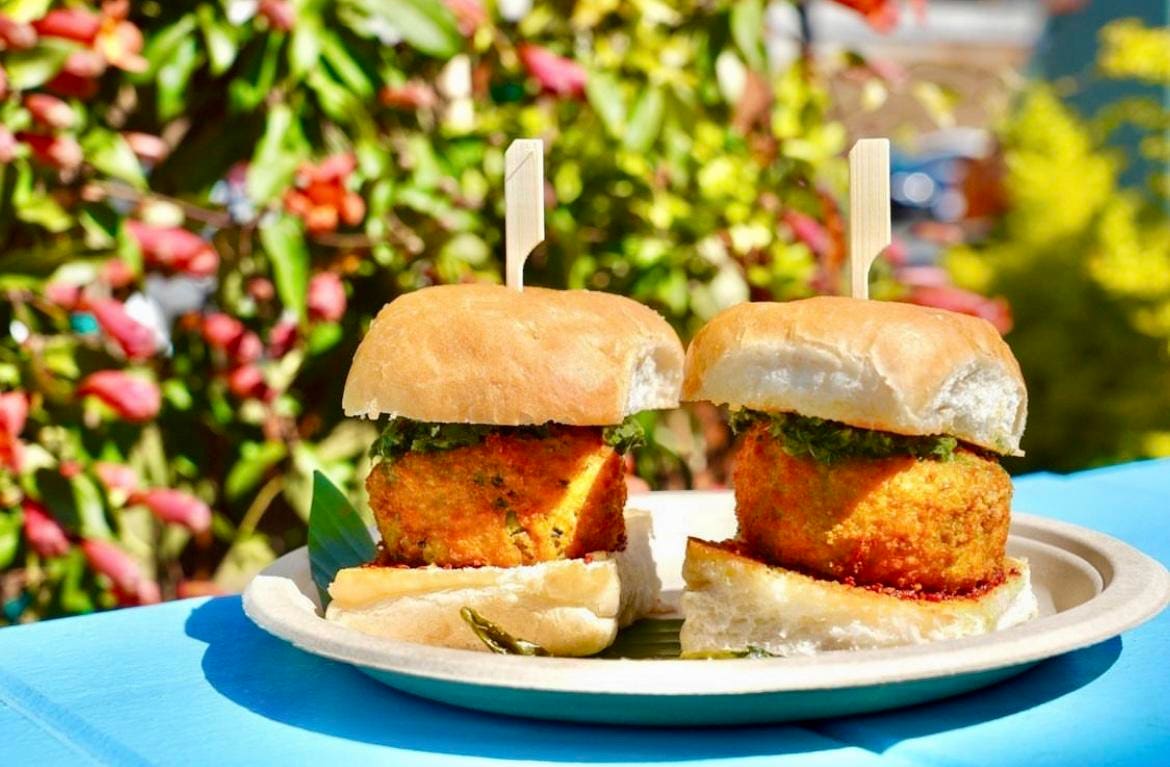 While traveling to promote his critically acclaimed new book, I’m from here, chef/author Vishwesh Bhatt visited some of his favorite places to dine east of the Mississippi. Here are a few highlights that are sure to leave you hungry enough to take a trip to try these delicious destinations.

Chef Bhatt’s story – beautifully told, memoir-style in the cookbook released in August – is familiar, but also surprising and decidedly moving. Born and raised in the Indian state of Gujarat, Vish was drawn to food from an early age. He spent time with his father going to the market and watching his grandmothers and mother prepare fantastic meals for the large family.

Many years later, the family had emigrated to the US and Vish attended the University of Mississippi at Oxford, a 90-minute drive from Memphis. His parents lived there at the time and he enlisted at a cafe specializing in plant-based thali lunches. “I didn’t know then that my love of cooking would soon overshadow my interest in graduate school,” he writes.

He eventually went to work in the kitchen of one of his favorite restaurants, City Grocery, and soon began to see similarities between Indian and Southern cuisine and ingredients. It’s that kind of melting pot cooking so artfully portrayed in the book in dishes like grilled okra, peanut masala stuffed baby eggplant, steamed corn cakes, and corn and kale fritters, recipes made with the home cook in mind.

Start back where it all started

The promotional tour kicked off at the world-famous Square Books in Oxford, followed by a celebratory dinner further down the road at City Grocery: “Nic (Swogger) has cooked fantastically from the book. He’s a big fan of flavors from Thailand, so he incorporated some of that into the flounder with a rice flour crust, soy sauce, and yuzu sauce to finish off the dish. He served corn and pumpkin, like a succotash and peas with ginger. By the way, Vish’s boss/mentor/BFF, John Currence, wrote the introduction to his book and if reading the sweet tribute doesn’t make you choke, check your heart rate.

In Atlanta, Chai Pani hosted the book signing and special dinner, but Vish also managed to land a visit to Miller Union: “I just love how warm and friendly it is. Few restaurants hit the nail on the head like they do every time at Miller Union. Vegetables are always central and that is very special. The field peas and fried okra were just brilliant, as the kitchen used the okra as the crunchy element.”

In Orange Beach, Ala., Chef Bill Briand and the team at Fisher’s rolled out a seafood meal with oysters and crab claws and a grouper preparation that inspired Vish to wish he’d come up with that dish: “It was served with a corn mash that was almost like a mousse seemed and charred tomatoes, all the elements of summer.” If you’ve never tried grouper, Vish said it’s one of the best minnows he’s ever eaten, “light and flaky with a sweet taste.”

Beautiful appetizers and homemade cocktails were served at a book signing in Ocean Springs, Miss., at Vestige, a menu-driven restaurant run by Chef Alex Perry and his wife, Kumi Omori. The kitchen’s take on Gulf red shrimp, for example, is spectacular. “It’s all about the shrimp. They marinate it in citrus and soy and lightly poach it. It’s not really a ceviche, but has that barely cooked quality.”

Matt Fern’s (ish) delicatessen in Raleigh, NC, is “so fantastic, so creative. It’s a tiny space for an old pharmacy, with only four or five tables. I had a simple BLT that was made with house cured bacon and I loved the pickled collards. As Matt is a wine man they serve so many hard to find selections. I had something from the Jura (a small area between Burgundy and Switzerland) with my sandwich. It was really special.”

Vish loved dining at Botiwalla in Charlotte, where the cuisine focuses on Indian street food. “They have the best Vada Pav, mashed potatoes dredged in chickpea flour and served as sliders. They also serve sticky ribs which I loved, with a tamarind and cane icing.

Chicago’s popular Mi Tocaya’s lineup of Oaxaca-inspired small plates was “so good. There were so many delicious dishes like the chicken mole with fresh citrus slaw, but the crispy duck with a sweet salsa was absolutely brilliant.”

Dauphin’s in Washington DC is a great place, with 350 seats that focus on fresh New Orleans dishes with ingredients from the mid-Atlantic. Chef Kristen Essig’s menu touches on some of Crescent City’s biggest hits. “Don’t miss the pork ear salad with mirliton, and the Gumbo Z’Herbes, served with potato salad. The fresh and grilled oysters are served with fresh grated horseradish, which is a nice touch.”

While in New York City for a special signing event at MOFAD, Vish returned to one of his regular haunts: “Nobody talks about Jane. It’s a hidden gem, an Old School neighborhood that’s not too New York-ifed.” They specialize in classic cocktails, always give you a nice honest pour and have a great burger and a nice steak.”

With the tour nearing its end, Vish is back in the Snackbar kitchen, inspired by the meals he enjoyed along the way. Guests can expect signs of that tasty tour on the ever-changing menu.