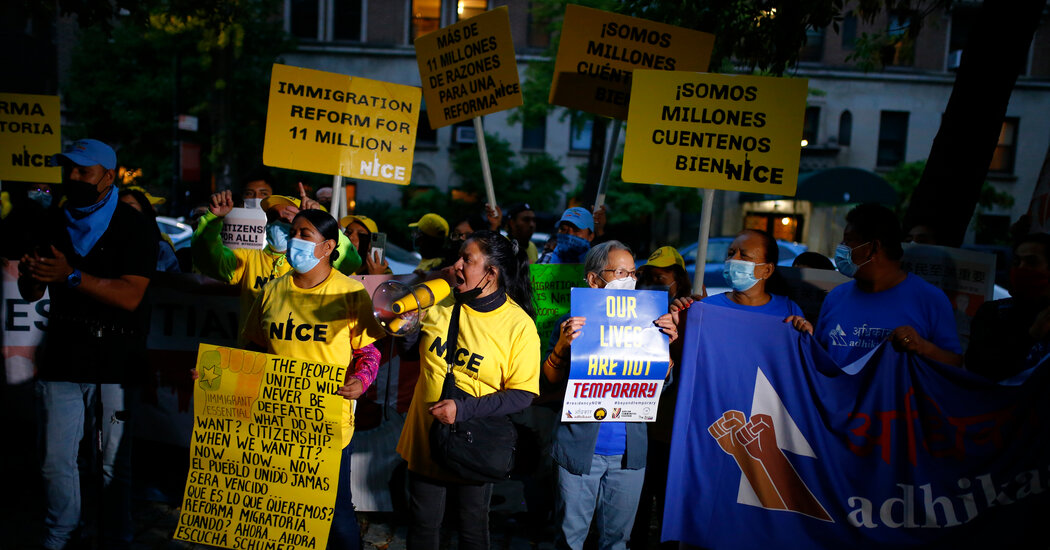 Significantly, the proposal would not put the millions of undocumented immigrants on a direct path to citizenship – the new measure alone would not allow them to obtain green cards immediately. Immigrants currently eligible for a green card, such as parents of adult U.S. citizens, could still apply for citizenship under the plan.

Supporters of the plan argued that the watered-down proposal should satisfy the parliamentarian, who had criticized the size of earlier versions.

The legislation would offer undocumented migrants not only protection against deportation, but also the possibility of obtaining a work permit – a point which immigration advocates say should more clearly tie the provision to the federal budget, which would allow parliamentarians to authorize it more easily within the framework of the reconciliation rules.

“This is a last-ditch effort to try and save something for the reconciliation process that can provide some level of protection to undocumented migrants while Democrats control Congress,” said Cris Ramón, a consultant in Washington-based immigration, adding that it’s “not necessarily, I think, where the promoters wanted to land.”

The Democrats’ plan would include most of the undocumented immigrants who entered the United States before Jan. 1, 2011 and could help between 7 and 8 million people, people familiar with the plan said. This would allow covered persons to travel out of the country with Homeland Security approval.

The proposal essentially codifies an improved version of the Deferred Action Program for Childhood Arrivals, or DACA, introduced by President Barack Obama in 2012, granting work permits and legal status to people who have come to the United States. before 2012 and have lived in the country continuously. since.

“My guiding principle throughout the ongoing reconciliation process has been to provide a pathway to citizenship for most of the undocumented community,” said Senator Robert Menendez, Democrat of New Jersey, who worked on the question, in a press release. “Despite the parliamentarian’s recent negative views, I will continue to work with my colleagues and a broad coalition of groups, including activists, to find a way forward. “

Extensive social safety net legislation would expand medicare to cover dental, vision and hearing care, allow the federal government to negotiate the price of prescription drugs, and include funding for paid family leave, subsidies for free child care, preschool and community college; and investments to fight climate change. Democratic leaders are currently working to reduce the $ 3.5 trillion package to attract the support of the centrist Democrats needed to get the measure to Mr. Biden’s desk.