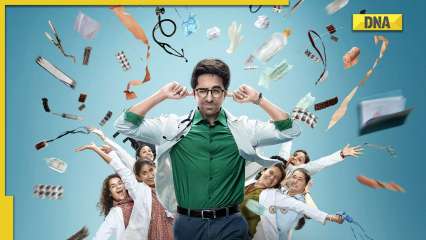 Ayushmann played a male gynecologist Dr. Uday Gupta in Doctor G whose trailer he shared on his Twitter handle on Tuesday, September 20, with the caption: “Department of gynecology ki har ek naari, padegi #DoctorG pe bhari! #DoctorG will help you from October 14, 2022 in theaters” .

The trailer promises a hilarious entertainer who promises to take the audience on an interesting and fun journey of a hopeful orthopedist turning into a gynecologist and the struggles he faces as the only male doctor in a class full of women. With a plot of how a man makes his way into a woman’s world, this comedic drama sheds light on a compelling subject in a light-hearted way.

Known for his portrayal of unique roles and compelling storytelling over the course of his career, Ayushmann, who was last seen in Anubhav Sinha’s political thriller Anek earlier this year, has once again taken on a different subject in his true way with his signature brand of impactful comedy that promises to spark conversations.

Apart from the Andhadhun actor, Doctor G has three great female performers in the form of Shefali Shah who plays the medical college coordinator, Rakul Preet Singh who plays his eldest, and Sheeba Chaddha who plays his mother in the comedy drama that is planned is in cinemas from October 14.