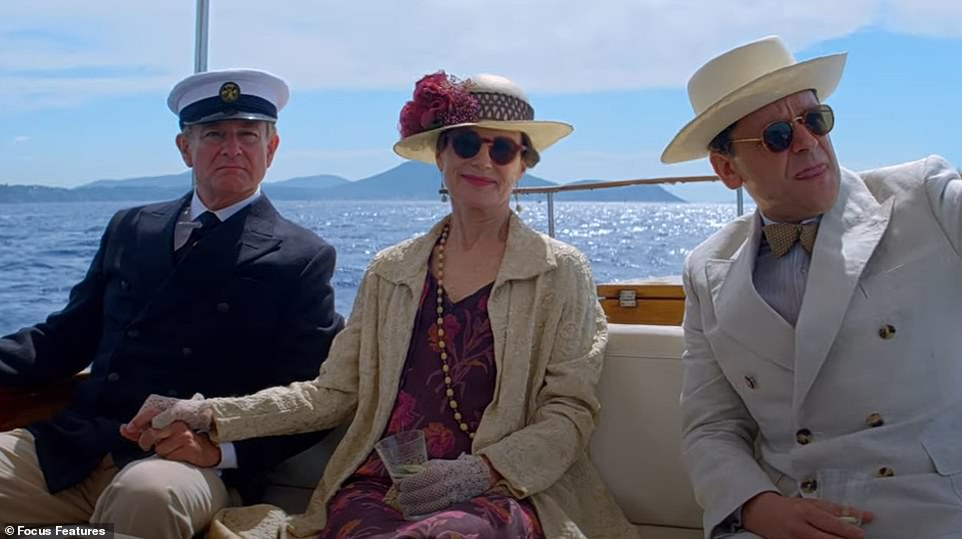 The first trailer for the Downton Abbey: A New Era, has been released, offering a glimpse at a brand new adventure for the Crawleys as they travel to a lavish villa in France.

The preview shows the famous family and their army of servants travelling to the unexpected location after learning that the Dowager Countess has inherited the estate from a former lover.

The trailer also hints that fans will finally get to see widower Tom Branson find love again with maid Lucy Smith, as the pair tie the knot in romantic scenes.

Coming soon! The first trailer for the Downton Abbey: A New Era, has been released, offering a glimpse at a brand new adventure for the Crawleys as they travel to a lavish villa in France

The trailer opens with a sweeping shot of the iconic Yorkshire estate before Violet Crawley, Dowager Countess of Grantham drops a bombshell on the family, including her son Robert, his wife Cora, and their daughters Lady Mary and Lady Edith.

She tells her son Robert: ‘Years ago before you were born I met a man and now I’ve come into the possession of a villa in the south of France,’ while butler Carson is seen discovering a historic portrait of Violent as a beautiful young woman before quickly showing it to the family.

Given the acquitisition of a luxurious property in the sprawling countryside, the Crawleys immediately decide to take a trip to the villa, but only after attending Tom’s wedding to young maid Lucy, after he was left devasted by the death of his first wife, Lady Sybil. 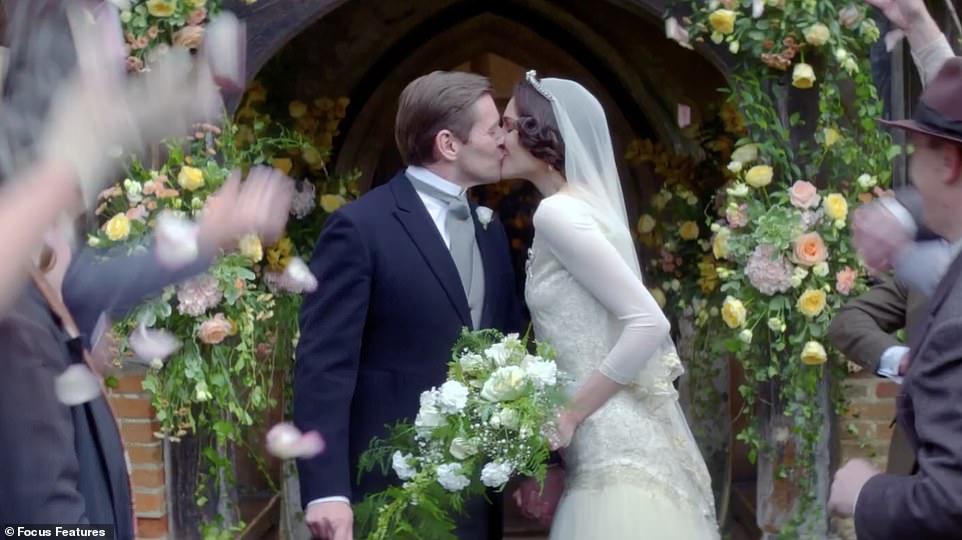 Wedding bells! The preview also shows widower Tom Branson finally discovering happiness again, as he ties the knot with maid Lucy Smith who he met in the first film

Shocking: The trailer features the Dowager Countess Violet Crawley sharing that she’s inherited a villa in France for a male suitor who has passed away

Surprise! Intercut with the Dowager’s unexpected news, Carson discovers a portrait of the younger aristocrat and shares it with the family

Love is in the air! In Downton fashion there’s a wedding to be had (L-R Richard Grey and his wife Isobel, Lady Rosamund Painswick, Lady Mary, her son George and daughter Caroline, Lady Maud Bagshaw, Tom Branson and his wife Lucy, his daughter Sybbie, Robert Crawley and his wife Cora, Lady Edith, her husband Herbert Pelham and daughter Marigold)

The pair struck up a romance in the first Downton Abbey movie, after he learned Lucy was actually the secret illegitimate daughter of Baroness Bagshaw.

See also  "The journey is difficult": Manisha Koirala on an "arduous" fight against cancer, shares photos of her treatment

Tom and Lucy can be seen sharing their first kiss as husband and wife, with the Crawley family posing for beaming snaps ahead of the lavish nuptials.

Along with a sprawling shot of the stunning French villa, the trailer also offers a glimpse of newcomer Laura Haddock, playing a glamorous platinum blonde beauty confidently strutting into the house to the delight of the attending servants.

Returning: As ever all of Downton’s beloved downstairs staff are expected to appear in the film, including Anna Bates (Joanne Froggatt) and her husband John (Brendan Coyle) (pictured)

Clearly enjoying their break away from the English estate, both Robert and Cora are seen enjoying a ride on a yacht, while Carson notes to his wife Elsie: ‘They better be warned… the British are coming.’

The trailer ends with one of the Dowager’s signature lines, as she tells her family: ‘And with that I will say good night and leave you to discuss my mysterious past.’ 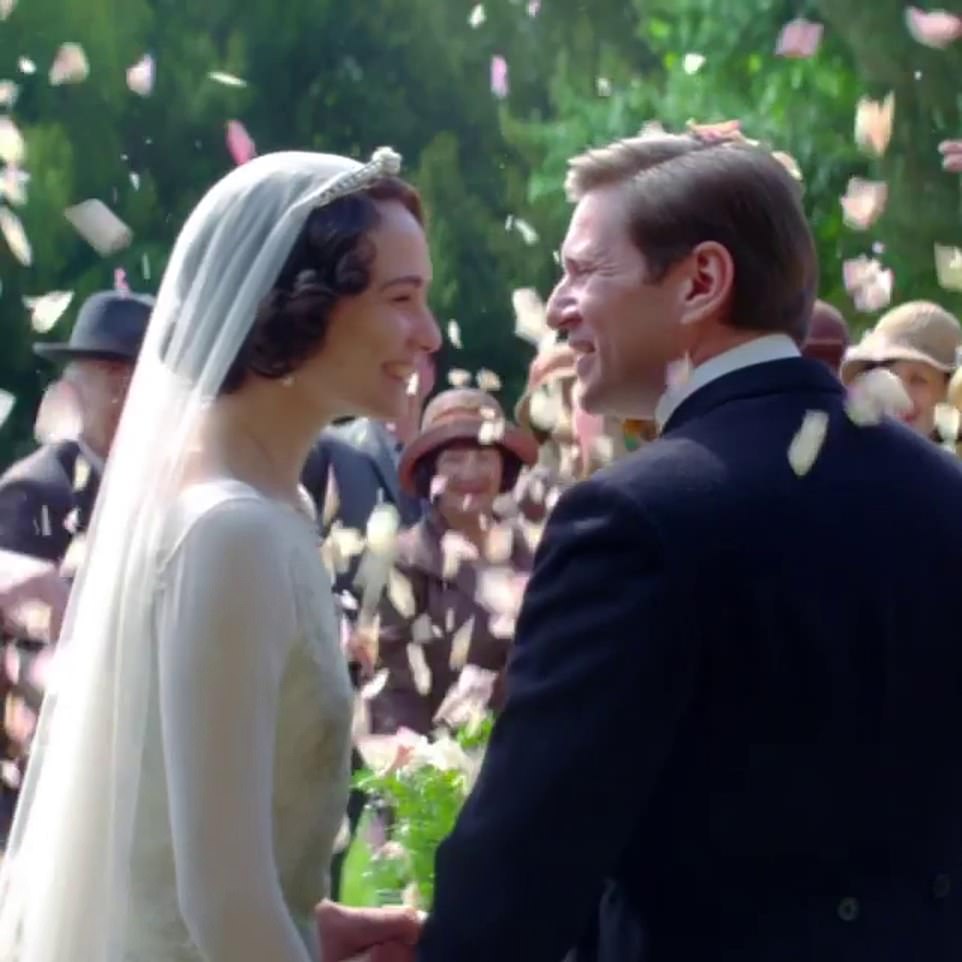 New love: Tom struck up a romance with maid Lucy, the secret illegitimate daughter of Baroness Bagshaw, following the tragic death of his first wife

After a failed romance with teacher Sarah Bunting, the Irishman fell for Miss Smith, but faced resistance from the Crawley family.

Fans were left wondering what would become of the couple after Miss Smith’s identity was revealed in the first film.

Other Downton Abbey: A New Era scenes teased included members of the Crawley family looking stylish while stepping out for a game of tennis and a striking speedboat whizzing across a body of water. 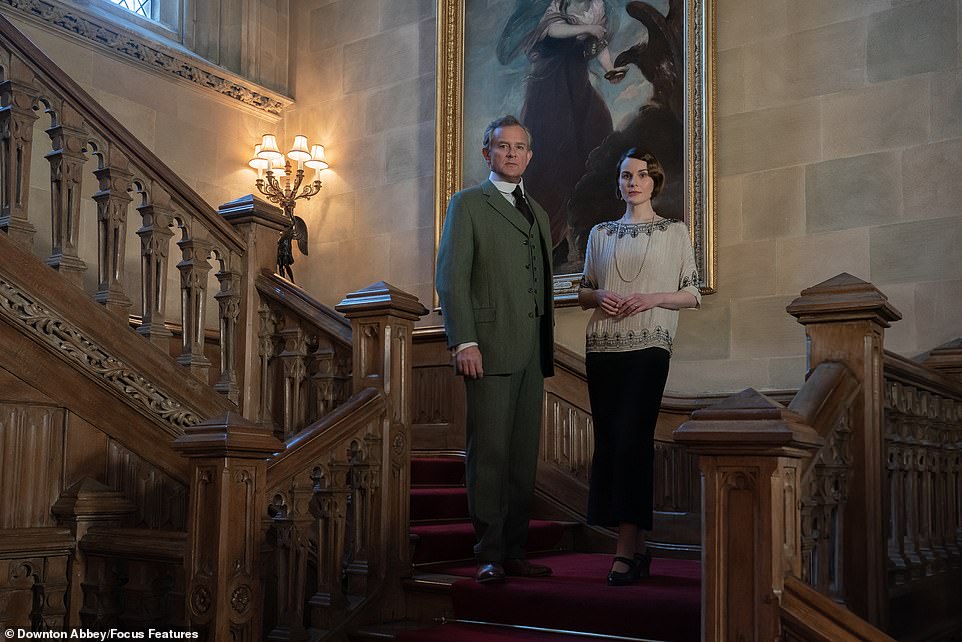 The teaser was also shared on Downton Abbey’s official social media pages alongside a caption that read: ‘The teaser trailer for #DowntonAbbey: A New Era will be exclusively in theaters on @belfastmovie this weekend.’

As specified on Twitter, a longer trailer will be released in cinemas this weekend.

It will be available to audiences watching Belfast, Kenneth Branagh’s semi-autobiographical film inspired by the BAFTA winner’s early childhood growing up in Northern Ireland surrounded by a large extended family.

A series of stills were also released on Wednesday. 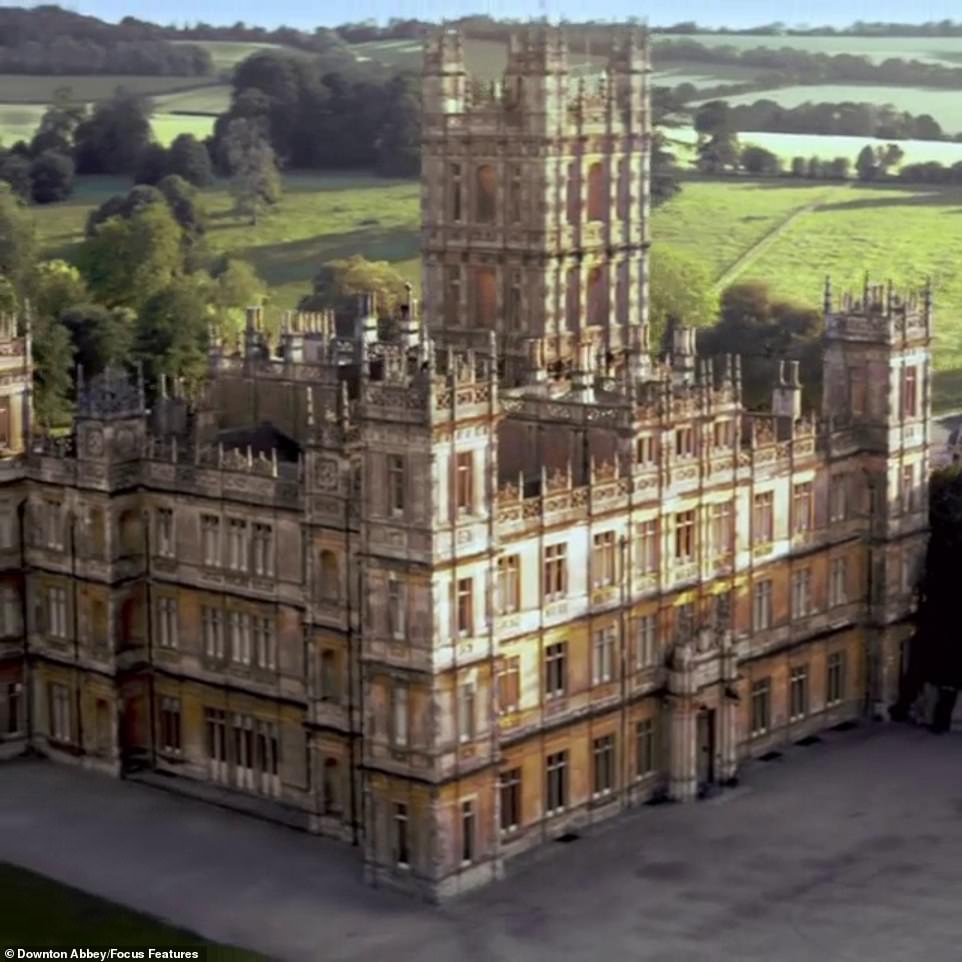 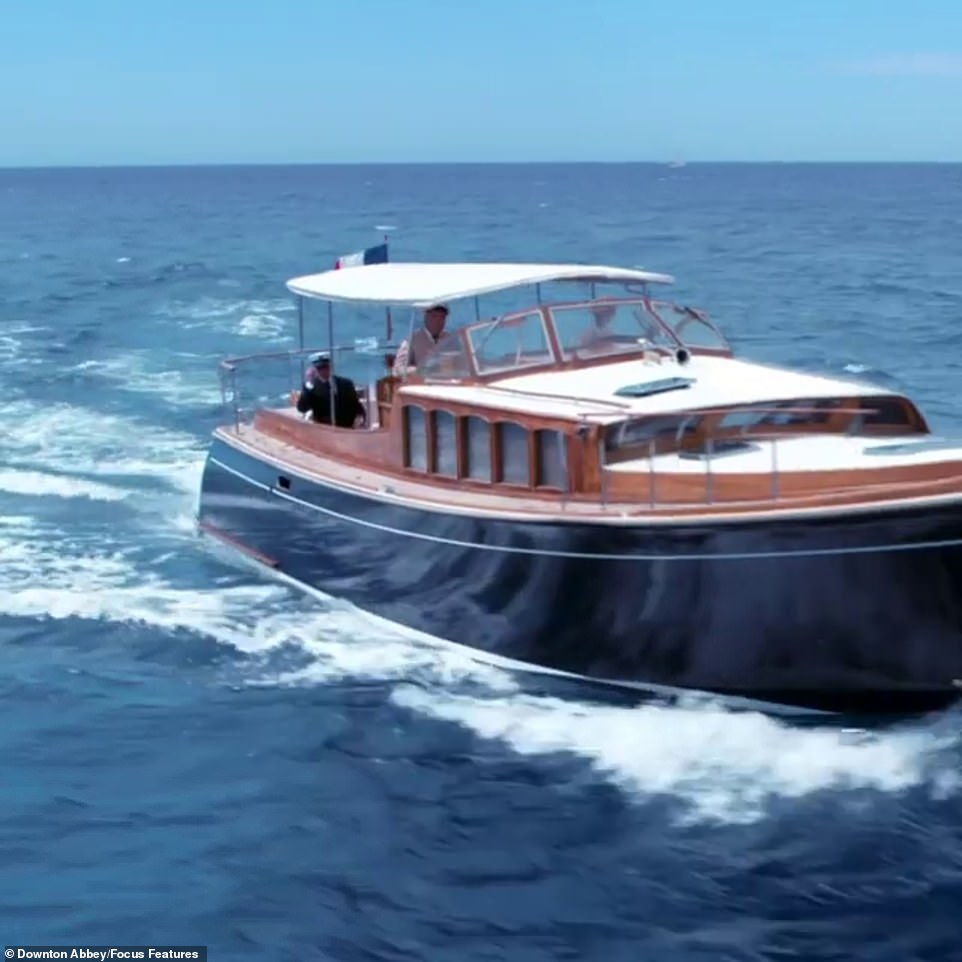 Striking: Other Downton Abbey: A New Era scenes teased included a striking speedboat whizzing across a body of water

In one, Robert Crawley (played by Hugh Bonneville) and his daughter, Dockery’s Lady Mary, stand at the top of their grand staircase.

Another shows Bertie Pelham (Harry Hadden-Paton), Lady Edith (Laura Carmichael), Lucy and Tom walking to a game of tennis while Myrna Dalgleish (Laura Haddock) can be stepping out of a car in another.

The teaser trailer’s release follows news that the sequel had its release date pushed back by three months.

The period drama had been due to hit screens around the Christmas period, but the release date has been delayed until March 18, 2022, it was reported in July. 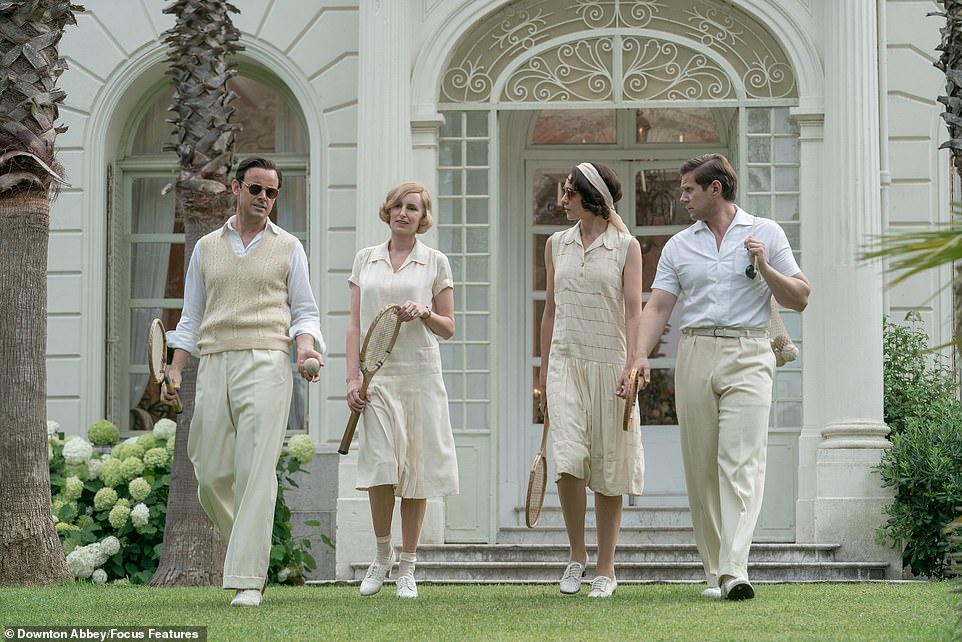 The screenplay is by Downton Abbey creator and Oscar winner Julian Fellowes and BAFTA and Emmy nominated Simon Curtis is directing.

Little is known about the upcoming movie, but it has been confirmed that Hugh Dancy, Laura Haddock, Nathalie Baye and Dominic West have joined the cast.

Although some scenes are filmed in studios and at different locations, the cast and crew spent much of their time at Highclere Castle – which is the home of the 8th Earl and Countess of Carnavaron, whose family have lived there since 1679.

The Countess of Carnarvon welcomed the decision to film the sequel at Highclere, explaining that even though it provides her with plenty of extra work, the hustle and bustle bring the castle ‘alive’. 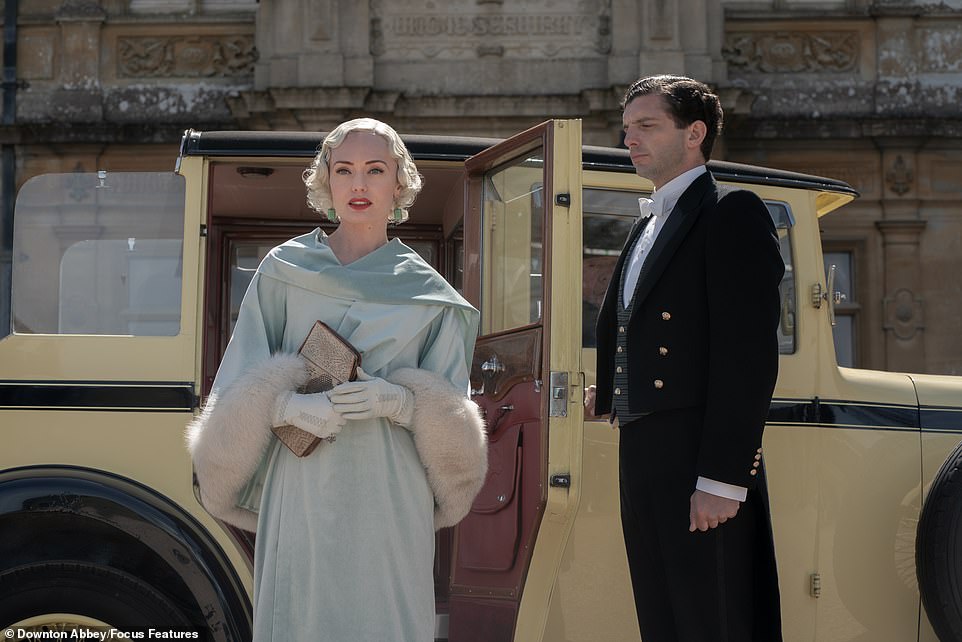 Stills: Another sees Myrna Dalgleish (Laura Haddock) stepping out of a retro car 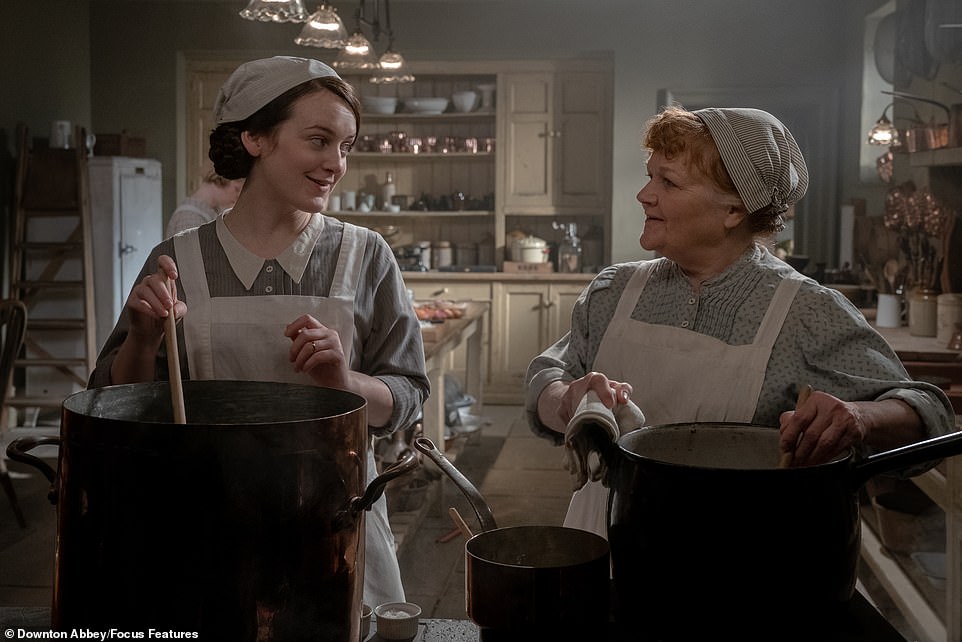 Delayed release: The period drama had been due to hit screens around the Christmas period, but the release date has been delayed until March 18, 2022, it was reported in July

She told The Daily Mail that when filming was taking place — from February to June for each of the six series of Downton and an additional one-off two months for the film — she was flat out.

Constantly in the wings, showing crew how to move furniture — ‘you take a girl in your arms and a chair by its bottom’ — and reminding people to wipe their feet and respect the carpets.

Yet, despite all the palaver, Lady Carnarvon is thrilled. ‘We all got very used to each other. We had a good routine. It was like a new term at school — ‘here they come!’

‘After all, a house like this is used to being busy, to being full of life. It comes alive with people and without them things go wrong.’

Downton Abbey: A New Era picks up where the first film left off.

The Downton Abbey movie saw beloved characters Robert (Hugh) and Cora Crawley (Elizabeth McGovern) told that they will be visited by the King and Queen and the estate have to prepare for the royal visit.

However the family have to deal with a number of set backs and problems along the way including a suspected assassin attempt. 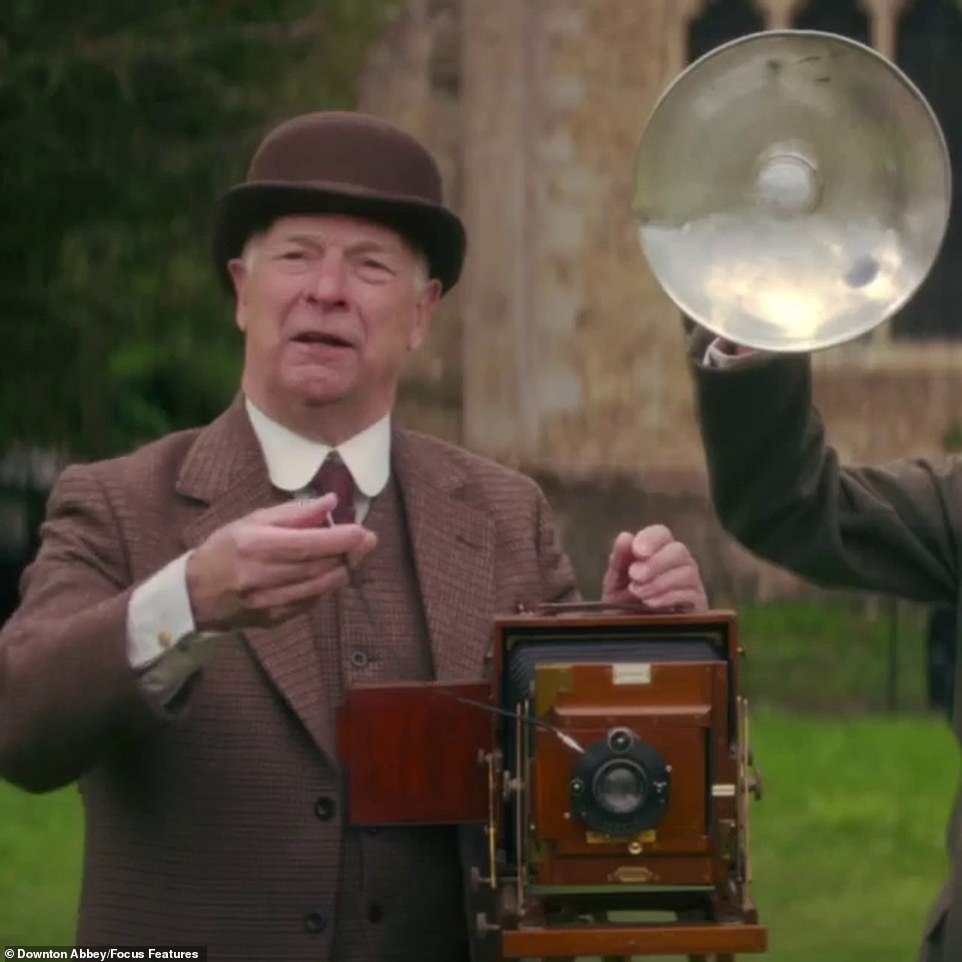 Photographer: In one part of the teaser, a photographer captures an image using a vintage camera

Although the sequel’s plot has been kept under wraps, creator Julian did tell People magazine this week: ‘It’s really a new era. The further the 20s went along, the more the world was changing in so many ways.

‘Everything from entertainment to transport was really different by the end of the 20s. That’s what we’re referring to in that.’

He added: ‘As we know from the last film, Mary may not be the titular head of the household, but she is effectively running the show. We take that further.’

It was reported in August that an iconic character will be killed off in in the sequel.

Iconic death: An iconic character will be killed off in Downton Abbey’s much-anticipated movie sequel, according to reports

The death is said to be ‘so poignant’ and fans of the Crawley family will no doubt be fearing for Dame Maggie Smith’s aging character Dowager Countess.

The Sun reported at the time: ‘Those who have seen the scenes said they are so emotional.’

A source added to the paper: ‘They really will leave fans in floods. It’s heartbreak at Highclere Castle and there won’t be a dry eye in cinemas.’

Julian created the original series that aired on PBS, which ran for six seasons from 2010 to 2016.

The show followed the lives of the Crawley family, who own a sprawling English countryside estate in the early 20th Century, and their servants. 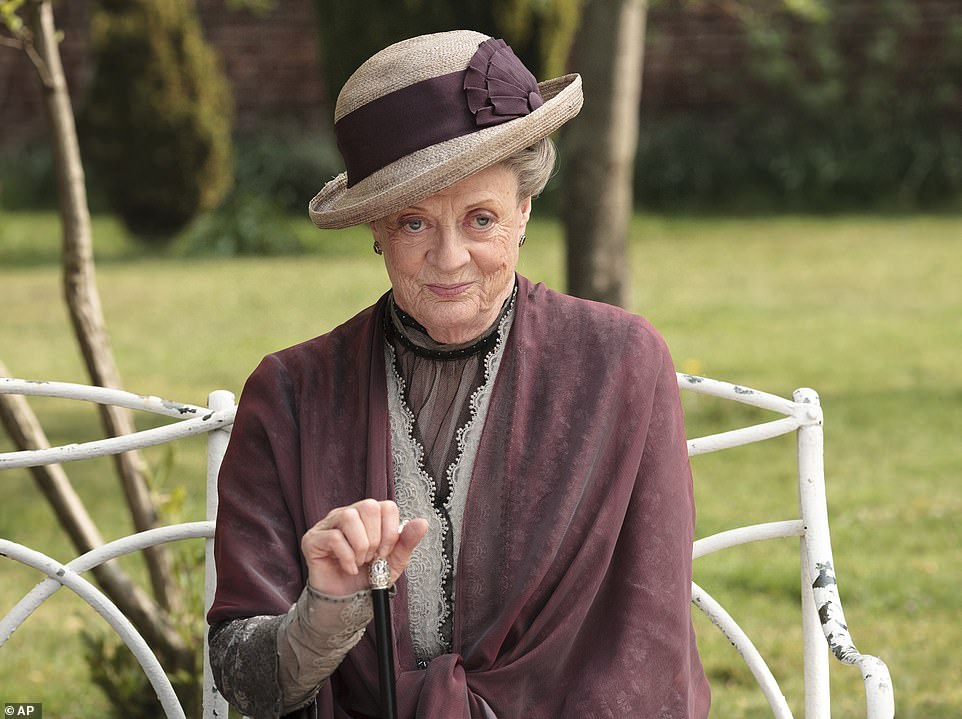 Fan fears: The death is said to be ‘so poignant’ and fans of the Crawley family will no doubt be fearing for Dame Maggie Smith’s aging character Dowager Countess