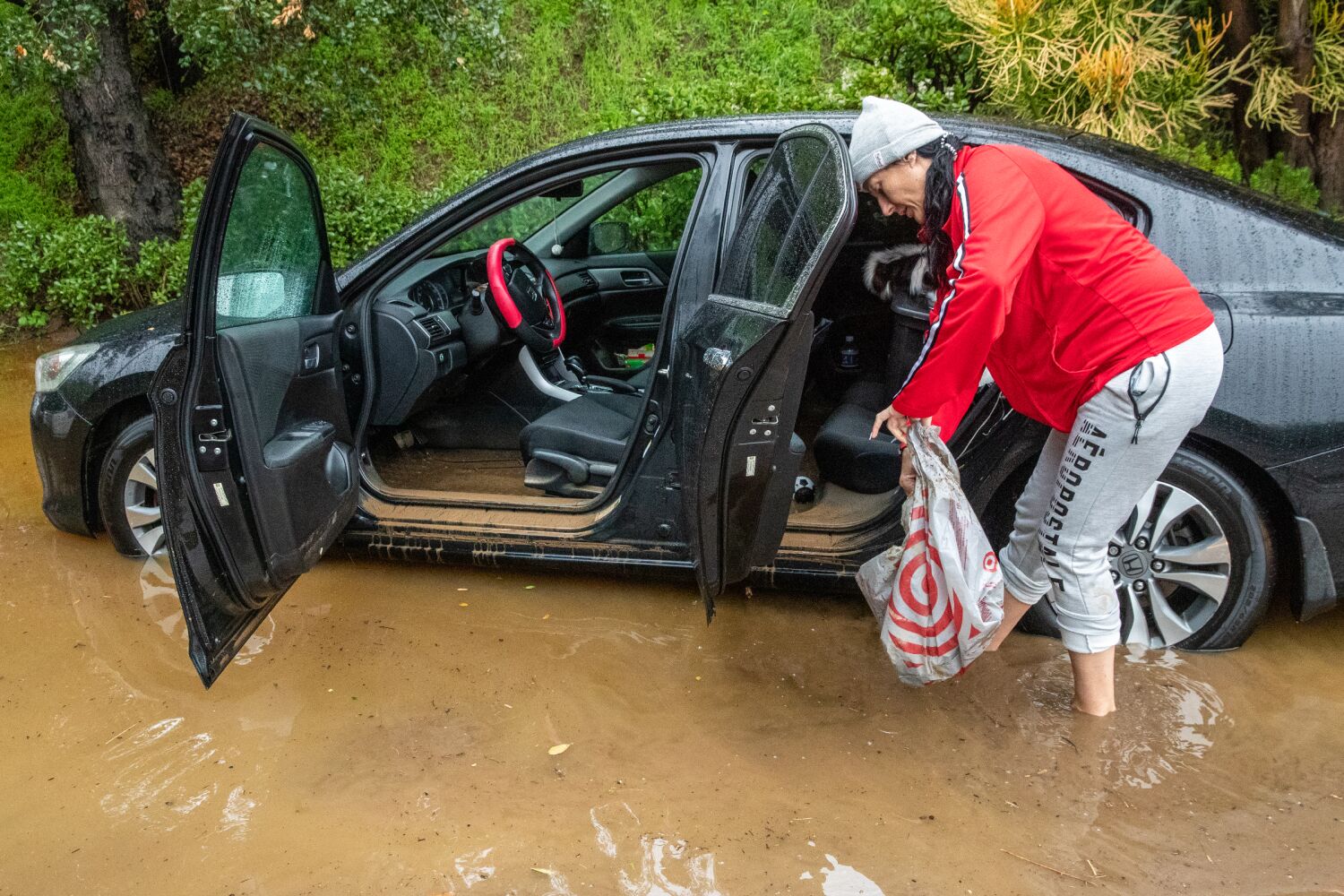 For decades, two Pacific climate patterns have played a major role in forecasting the weather in California and other parts of the world. El Niño — a warming of sea surface temperatures in the tropical Pacific — seemed synonymous with wet winters for Southern California, while La Niña heralded drought.

But the future model did not last this winter. Despite the presence of La Niña, a powerful series of 10 storms brought impressive precipitation across California, causing flooding and landslides, raising reservoir levels and dumping eye-watering snowfall into the mountains.

Although winter is not over yet and another dry spell cannot be ruled out, the heavy storms have defied expectations of a dry winter.

The October forecast by the Climate Prediction Center, a division of the National Weather Service, indicated that the odds were stacked against the Golden State: A rare third year of La Niña was expected. And California had all three of its driest years on the historic record.

The center’s seasonal forecast for December, January and February said there were equal chances of a dry or wet season in Northern California. But for Southern California, the agency reported there was a 33% to 50% chance of precipitation below normal levels.

“These odds will be relatively modest … because that’s the state of the science,” DeWitt said.

However, those subtleties receive less attention. Easier to understand was the bottom line, as a statement from one center noted, “The greatest chances of drier-than-average conditions are predicted in parts of California,” as well as other southern parts of the country.

But this winter it changed. Since early December, downtown LA has received more than 10 inches of rain — more than double the average of 4.91 inches for the time, and also more than the December-January-February average of 9.41 inches.

Yet this shift is not an anomaly. La Niña was even present during a spectacular wet season: the winter of 2016-2017.

The storms were so intense in California that they ended a debilitating drought that ran from 2012 to 2017. By the end of the 2016-2017 water year, downtown LA received 134% of its average rainfall; San Jose experienced surprise flooding that inundated hundreds of homes; and a retaining wall threatened to collapse at California’s second-largest reservoir, prompting an order to evacuate more than 100,000 people downstream from the brimming Lake Oroville.

That season was so momentous that the northern Sierra Nevada—critical to the state’s water supply—recorded the wettest rainfall in the historical record. In late June, skiers raced down mountain slopes.

One meteorologist who has warned against putting too many eggs in the La Niña basket is Jan Null, a former chief forecaster for the National Weather Service. In late 2020, as La Niña was developing, he tweeted of the phenomenon: “What does it mean for rainfall in California and the US? Almost everything!”

He was back four months ago tweeted: “Does La Niña automatically mean another dry winter for California? Not necessary.”

Null, an adjunct professor in the San Jose State Department of Meteorology and Climate Sciences, has collected data comparing La Niña and El Niño years and what they have meant — or not — to California precipitation.

On the other hand, during all El Niños since the 1950s, coastal Southern California received 126% of the average precipitation, while the Bay Area received 109%, Null calculated.

But there are also plenty of memorable exceptions where wet years have coincided with La Niña events. One was in the winter of 2010-2011, which produced 142% of the average annual rainfall in central LA. A particularly powerful storm just before Christmas caused flash flooding and debris flows, causing $36 million in damage to Orange County, including $12 million to Laguna Beach.

“The bottom line is that if you count every El Niño as wet and every La Niña as dry, you’re going to be embarrassed sooner or later.”

A major reason why El Niño and La Niña are so fixed in the minds of many Californians as the crystal ball of winter weather is how the science evolved in the 1980s and 1990s after particularly severe winter storms in 1982-83.

There was no way to predict El Niño back then. Scientists “really didn’t even understand at the time that it was even happening,” DeWitt said, but it later became associated worldwide with significant chaos. In California, the 1982-1983 season brought the second wettest annual precipitation to the northern Sierra and, according to data Null has compiled, $2.3 billion in damage in today’s dollars, one of the costliest flood seasons in the state in the last half. century.

In early 1983, El Niño was so powerful that storms decimated piers along the California coast. A center section of the landmark Seal Beach Pier collapsed and the tip of Santa Monica’s historic pier was washed into the sea. A storm in late January damaged 1,000 homes between Santa Barbara and the Mexican border as heavy surf was exacerbated by unusually high tides that battered oceanfront neighborhoods.

See also  One dead in crash south of Auckland

It was that shock that prompted scientists to devise ways to predict the next El Niño. Failure to predict the 1982-1983 event led to the development of a suite of tools that successfully predicted another El Niño in 1997-1998, which came in at record strength.

There was “massive flooding over the west coast, especially California. And it was predicted correctly,” DeWitt said. The damage in California was severe — with at least 17 deaths — and brought Los Angeles its wettest February on record.

And that pushed a few messages to a lot of people — including the scientific community — first, that you would always see that with El Niño and La Niña, especially with significant strength; and that this was actually a solved problem.

“And not one of them was ever true,” DeWitt added.

He recalls his predecessor at the Climate Prediction Center testifying before Congress about the impending 1997-1998 El Niño and its predicted effects, a prediction that ultimately came down to the money. “And it created the confidence that you could always trust that you just knew… the El Niño/La Niña phase, and that could give you a very accurate precipitation forecast, especially for California. And that’s just scientifically not true.”

In other words, the weather effects of El Niño and La Niña usually happen – until they don’t, and sometimes in spectacularly disappointing ways.

So when a third supermajor El Niño event emerged in 2015, there was hope that it would raise California’s prospect of major, drought-busting storms. Instead, downtown LA received less than 50% of the average rainfall; San Francisco broke even, with its average annual count; and the northern Sierra received only 9% above average annual precipitation.

“The bottom line is that if you think of every El Niño as wet and every La Niña as dry, sooner or later you’re going to be embarrassed,” said retired climatologist Bill Patzert.

Patzert developed a reputation for being “as good as rain” on El Niño and La Niña influenced weather patterns, but he was among those betting on a California wet winter in 2015-2016. However, he notes that Texas was hit hard by flooding that spring, and that South Texas tends to receive above-average precipitation during an El Niño event.

In the weather game, El Niño and La Niña are still the superstars, a bit like Stephen Curry of the Golden State Warriors, Null said.

“But you still have nights when Klay Thompson or Draymond Green take over,” Null added. In other words, it is possible that other factors are minimizing the effects of a normal El Niño or La Niña.

In fact, recent correlations between El Niño and La Niña and precipitation in California “have not really been proven,” said Marty Ralph, director of the Center for Western Weather and Water Extremes at the Scripps Institution of Oceanography at UC San Diego.

The correlation is imperfect, which could mean “there are some processes that interrupt and disrupt that correlation,” Ralph said.

So while La Niña and El Niño play a role in Southern California weather, another phenomenon known as the Madden-Julian Oscillation can affect whether or not storms strike. And instead of being predicted months in advance, they can be predicted just weeks in advance.

The Madden-Julian Oscillation – or MJO – is separate from La Niña and El Niño. It begins as a huge expanse of oversized precipitation, often in the form of tropical thunderstorms, that tend to move from the Indian Ocean eastward to the Pacific Ocean, Ralph said. That could release a huge amount of latent heat into the atmosphere, and through that action it could affect storm tracks and whether they hit California.

But even the MJO correlation is not perfect. Ralph recalls that during a four-year period, there were two years when the MJO was associated with atmospheric rivers reaching California. The other two years, the relationship did not appear.

Ralph assumed there must be something disturbing the correlation when the pattern didn’t work. “And look, about three, four years later, there was a paper — a brilliant study — that was found in the stratosphere, there’s something called the quasi-biennial oscillation,” which explained the connection between the MJO and the weather on the West coast.

“The bottom line is, there’s a lot more to learn about what controls pre-season precipitation anomalies and wet seasons on the West Coast,” Ralph said.

As for the rest of the winter, California will be in a dry spell for the next few weeks. But DeWitt is watching the MJO closely for clues as to what February will bring, as that answer will prove important to California’s water supply. Some specific phases of the observed MJO have already been associated with the series of atmospheric river-driven storms that recently hit California.

And now circumstances suggest the start of a new MJO. If it stays in the first few stages and then dies, that would bode badly for more rain for California. But if it continues like this, the state could experience similar heavy rainfall around the middle or third week of February, DeWitt said.

Suspect arrested in connection with fatal stabbing at SEPTA station