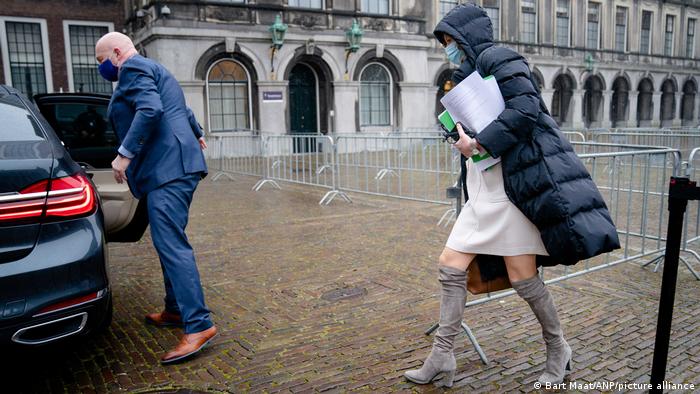 Dutch interim Prime Minister Mark Rutte defended his leadership on Thursday after notes on the formation of the new coalition government contradicted his statements to the press.

Opposition party leaders accused Rutte of lying and called on him to step down as lawmakers debated confidence in him to form a new government.

Earlier this month, Rutte’s center-right People’s Party for Freedom and Democracy (VVD) won more seats in parliament in the election than any other party, putting them in first place to lead. a new coalition government.

How did the crisis start?

Photojournalists captured one of the two officials, Kajsa Ollongren of the centrist party D66, as she rushed out of parliament after the result of her coronavirus test.

Ollongren appeared in the photo with documents containing notes on the coalition talks.

READ  Election in the Netherlands: Prime Minister Rutte's party on track to win most seats | UKTN | 03/17/2021

Omtzigt had spoken about the childcare allowance scandal, which forced Rutte’s former cabinet to resign in January.

What did Rutte say?

Last week, Rutte told reporters he had not discussed Omtzigt in the coalition talks. But other notes released Thursday confirmed that he had in fact referred to the CDA lawmaker.

In a debate that followed Thursday, Rutte said he did not remember that part of the coalition talks and had answered journalists’ questions “in good conscience”.

He added that he only remembered receiving a call Thursday morning about the talks. Rutte declined to identify the source.

READ  Murder of a billionaire - How suspects spent money after payment

The prime minister insisted that “elsewhere” meant he was suggesting that Omtzigt take up a ministerial post.

How did lawmakers react?

Geert Wilders of the right-wing Nationalist Party for Freedom (PVV) criticized Rutte’s leadership and called for a motion of no confidence.

“Don’t you realize that your time is up?” Said Wilders. “Look for a job elsewhere yourself.”

Sigrid Kaag of the D66 party, who came second behind Rutte’s PVD in the March elections, said she had seen Rutte’s “model of forgetfulness, amnesia”.

“How can you, in the biggest crisis we face in the Netherlands, restore the confidence that has been damaged again?” Kaag asked.

Omtzigt, who was sworn in as an MP on Wednesday, was not present for Thursday’s debate. He earlier said his impeachment from parliament was “an affront to the Dutch voter,” as the Reuters news agency quoted.

What’s next for Rutte?

“I have led the country through an economic crisis, a refugee crisis and now a health crisis, a pandemic,” Rutte told parliament, pleading for confidence.

“I want to continue with this and form a new coalition with other parties to lead this country. And I hope I have enough confidence for that.”

Rutte’s political career is now in the hands of parliament. If he loses the vote of no confidence, the fate of the new coalition will become more unclear.

Wilders, whose party recently lost seats, has already called for new elections, according to local media.

Nicknamed “Teflon Mark,” Rutte has survived scandals and no-confidence votes in the past. If he survives this one, he could become the longest-serving prime minister of the Netherlands.