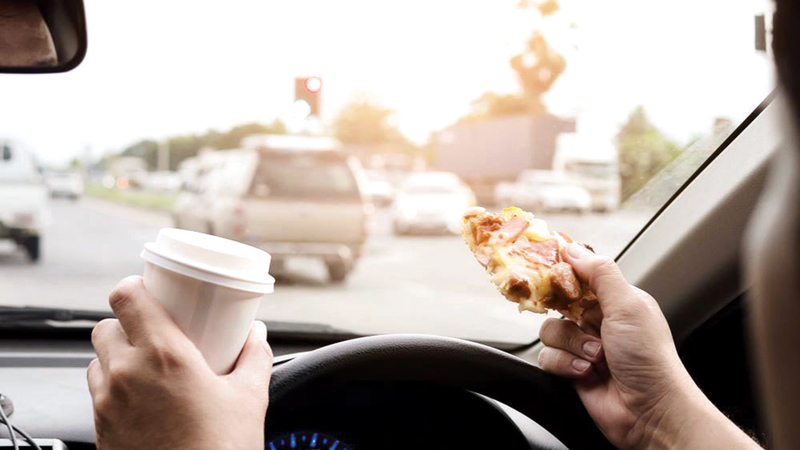 The Integrated Transport Center of the Department of Municipalities and Transport in Abu Dhabi has warned of negative behaviors that distract drivers, distract them from the road, and limit their control over driving their vehicles, including excessive use of phones, browsing social media while driving, and preoccupation with passengers inside the vehicle. In addition to eating and drinking, and wearing makeup while driving.

And researchers from the Virginia Institute recently conducted a year-long study, and found that wearing makeup while driving a vehicle increases the risk of a driver getting into an accident three times more, compared to using a cell phone to talk or enter a phone number.

In a campaign it launched on its official pages on social media platforms, to raise awareness of the importance of traffic safety, the center called on vehicle drivers to focus while driving, and not to be distracted by other than the road, in order to avoid accidents, and to preserve their safety and the safety of others, pointing out that «preoccupation with food. Drinking while driving increases the rate of vehicle accidents to 80%.

The center indicated that it aims to enhance traffic awareness for road users, urging drivers to adhere to safe driving, safety instructions, focus while driving and adhere to the established speed limits to avoid accidents, in line with the zero vision strategy launched by the Department of Municipalities and Transport, in cooperation with the Traffic Safety Committee. With the aim of reducing the number of road accident deaths to zero, to establish a safe and sustainable transportation environment that contributes to enhancing the quality of life in the Emirate of Abu Dhabi.

He stressed that the development of the Zero Vision strategy stems from its keenness and the keenness of the relevant strategic partners to provide a safe and sustainable transportation system, to enhance the quality of life and make Abu Dhabi a safer society.

The vision zero strategy focuses on developing a road map with the aim of reducing serious injuries and deaths to reach the lofty goal of “zero”. The physical limitations of the human body in bearing the force of collision.

The scope of the project’s work includes developing an action plan that covers all strategic axes, from establishing safe roads, applying safe speeds, developing safety specifications for vehicles to reach safe vehicles, enhancing road users’ responsibility towards others and their behaviors, to be safe users, in addition to developing a traffic accident response system.

This is done through the use of a number of necessary tools and the launch of a number of initiatives and projects that are summarized in many disciplines, including education and driver training programs, in addition to mechanisms for licensing vehicles and drivers, laws and rules, in addition to traffic control, specifications, creativity and innovation, coordination, and scientific research. , especially by relying on and analyzing data.

Abu Dhabi Police warned drivers of behaviors and distractions that distract them from the road, while driving the vehicle, which may cause traffic accidents, including eating, drinking and smoking, as well as applying makeup for women, as it exposes them to a violation of being busy other than the road, and a fine of 800 dirhams and four points.

She explained that preoccupation with the phone while driving caused several traffic accidents in the Emirate of Abu Dhabi during the past years, which resulted in death and injury to people, and various damages to vehicles, while the Traffic and Patrols Directorate tightened control procedures and violated a large number of drivers, because they were busy driving using the phone or jealousy.

• “Integrated Transport” warns of 5 negative behaviors that distract the driver.

• The driver is morally and socially responsible for his own safety and the safety of others.

• 800 dirhams and four points for a traffic violation other than the road.