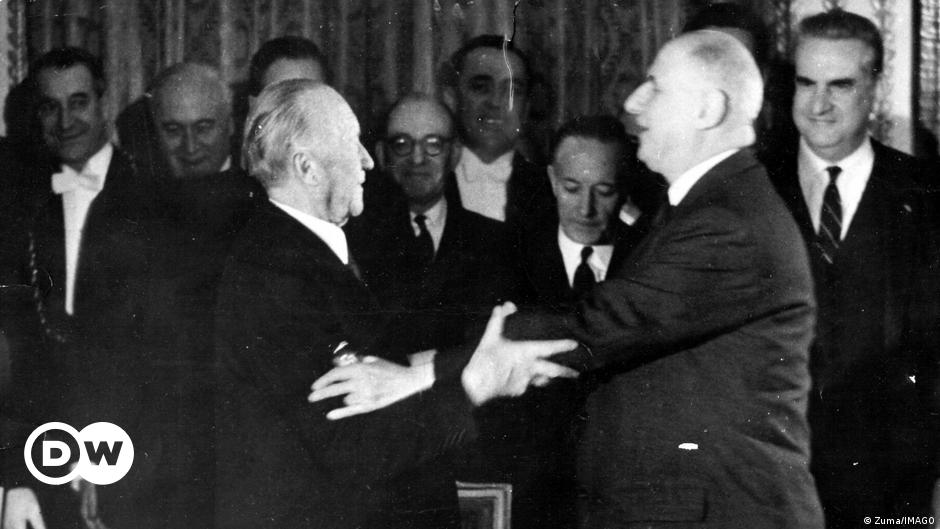 German Chancellor Konrad Adenauer was 87 years old, French President Charles de Gaulle 72. And yet it was up to these two older men, with memories of two catastrophic wars fresh in their minds, to usher in a new beginning in the relations between Germany and France.

On January 22, 1963, at the Elysee Palace in Paris, the official residence of the French president, the two men shook hands, exchanged a brotherly kiss and signed a treaty declaring that the age-old foes were now friends.

It hadn’t even been 18 years since the end of World War II and millions of veterans on both sides had many memories overflowing; even before the rise of Adolf Hitler, German propaganda had instilled in schoolchildren that France was Germany’s oldest enemy.

But precisely because Adenauer and de Gaulle brought this experience with them, they gave the case “all the more credibility,” said Frank Baasner, director of the Franco-German Institute.

Yet the friendship treaty would not have been possible, says Baasner, without ordinary French and Germans. Long before the signing, “after all, there was a really beautiful, amazing, courageous rapprochement between people in society,” he told UKTN. “[The treaty] was the culmination of a process of rapprochement that came from within society. We must not forget that.”

But this reset was not just about gestures from humanity. Both Adenauer and De Gaulle had strategic goals to pursue and to some extent these conflicted.

“On Adenauer’s side, the priority was very clear, in fact, it was his credo: we want to anchor ourselves in the West,” said Baasner. “And that meant partnership with the United States, and it meant reconciliation with France.”

De Gaulle, on the other hand, wanted to tie the new West Germany to France to prevent it from allying with the US and Britain against France. Just a week earlier, de Gaulle had vetoed Britain’s entry into the European Economic Community, the predecessor of the EU. For his part, US President John F. Kennedy even tried to prevent the Elysee Treaty.

He failed, but he managed to get the Germans to insert a preamble shortly before the treaty was ratified in the Bundestag, making it clear that cooperation in NATO and the partnership with the US would not be compromised. Outwardly, Paris agreed to this, but behind the scenes De Gaulle would have raged, according to his confidant Alain Peyrefitte: “The Americans are undermining our treaty. And why? Only because German politicians are afraid that they will not bow.” low enough for the Anglo-Saxons.”

Despite these early frictions, the Elysee Treaty is now considered a great success. The aim was to hold regular intergovernmental consultations in order to reach as much agreement as possible on foreign and security policy. “I think a lot has come about in the course of the collaboration,” says Baasner. He says the French side noticed “that the Germans, despite their strong ties to the US, did not give up on the treaty, but actually fulfilled it.”

And it wasn’t just politicians and high officials who would meet in the Elysee era. In July 1963, the Franco-German Youth Office was founded, which to date has brought about ten million young Germans and French people closer to their neighbors through its exchange program. In the past 60 years, numerous twinning initiatives have been established. The Franco-German military brigade was founded in 1989. Three years later, the Franco-German TV channel Arte went on the air.

On the 40th anniversary of the Elysee Treaty in 2003, both sides agreed to hold regular joint ministerial councils. In 2017, President Emmanuel Macron, in his now-famous Sorbonne speech on the future of the EU, also called for the Elysee Treaty to be re-forged. This resulted in the 2019 Treaty of Aachen, which includes a Franco-German parliamentary assembly and a citizens’ fund to bring people closer together.

Cozy Merkozy, but Schacron – not so much

Some couples at the head of respective governments have gelled better than others. Hands-on Social Democratic Chancellor Helmut Schmid and aristocratic liberal Valery Giscard d’Estaing in the 1970s shared a deep friendship and together laid the foundations for a common European currency. Christian Democrat Helmut Kohl and Socialist François Mitterand were separated by political convictions as well as mentality, but in 1984 they created an iconic image of reconciliation when they held hands at the Verdun military cemetery in memory of the dead of the two world wars.

Later, the thoughtful Angela Merkel and the hyperactive Nicolas Sarkozy also worked very closely together in the euro crisis that started in 2008, leading the media to conflate their names with Merkozy. The term Merkron (for Merkel and Macron), on the other hand, never took off, as the two did not harmonize very well, and a neologism combining the names of Emmanuel Macron and Olaf Scholz had not even been attempted.

At joint appearances, Macron and Scholz like to ritually reaffirm their nations’ close ties, but so far there hasn’t been much evidence of personal closeness. There is also some political friction at the moment, especially about how to deal with the war in Ukraine. It took a long time for Macron and Scholz to travel to Kiev together. Scholz has shown more restraint than Macron in supplying arms to Ukraine. On the issue of a gas price cap, Macron even publicly warned that Germany was “isolating” itself in Europe – an insult to Berlin. The two sides are also making very slow progress on joint armament projects, such as the development of a fighter jet.

But Frank Baasner of the Franco-German Institute says these problems should not be overstated. “The ability to engage in dialogue even in crisis situations has not disappeared,” he said. “It’s true that the differences of interest are there, and the strategic orientations are there

maybe also different. Germany has always had a hard time adopting something like a geostrategic view of the world, which France has always had. Now Germany may be about to have to do the same.” In that respect, he sees a good chance that both partners will get closer again.

In any case, French and German societies agree on the importance of Franco-German cooperation for the European Union. In an IPSOS study conducted this year on the occasion of the Élysée anniversary, eight out of ten French people and the same number of Germans believe that the Franco-German engine is important for the future of the EU, although only 67% of young people (18-24 year old) French people think so.

And what about the language problem? The number of German-speaking students in France has been falling sharply for years, while France is struggling with a shortage of German teachers. The situation is similar on the German side of the border.

Valéry Giscard d’Estaing was probably the only French president since the signing of the Élysée Treaty who spoke reasonably good German, and none of the German chancellors spoke enough French for conversation. “On s’arrange avec l’anglais,” Giscard d’Estaing once sighed in an interview when asked about the language barrier. They help themselves with English.