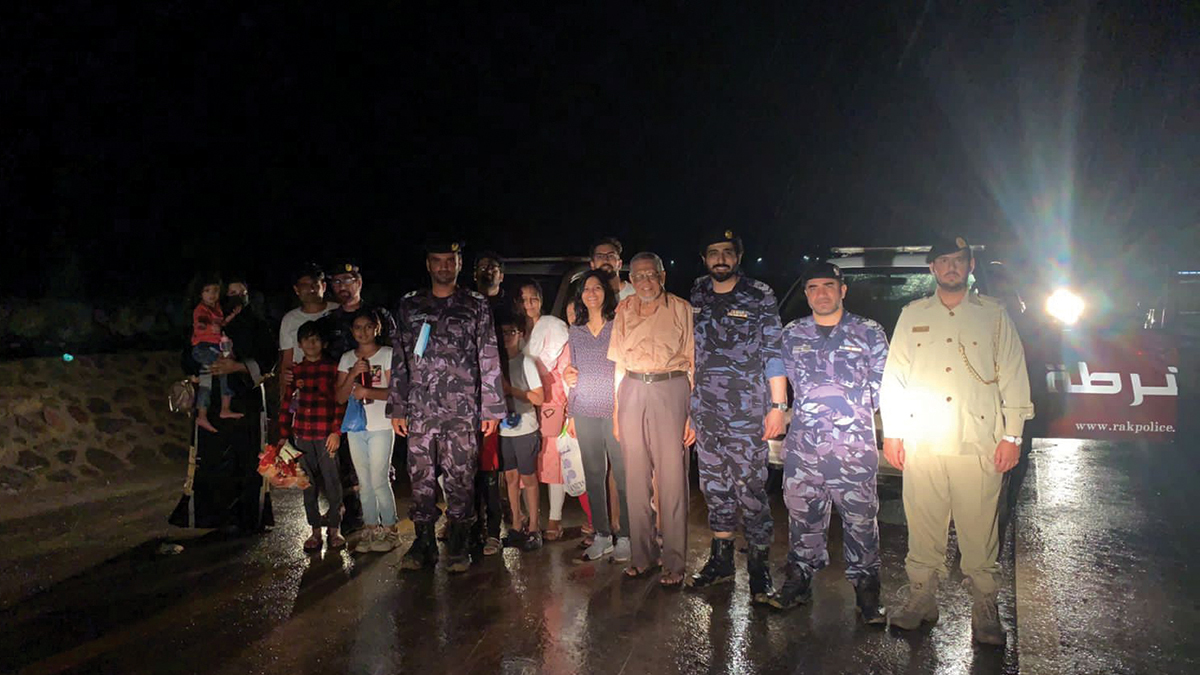 The National Authority for Emergency, Crisis and Disaster Management, the Ministry of Interior, and the National Center of Meteorology held an exceptional media briefing on the weather conditions prevailing in the country, during which the authority confirmed that no loss of life or serious injury was recorded, despite the intensity of the rain and fluctuations in the weather that resulted in the flow of torrents. and valleys in a number of regions of the country, and rain raided a number of dwellings.

She added that the damage was limited to material losses only, as the competent authorities are working according to a national plan for natural disasters, and preparations have been made for such an emergency security situation, stressing that the safety of people and property is “a top priority.”

She confirmed the work of the specialized teams day and night, according to scientific and practical plans, in preparation and readiness to deal with all emergency cases, according to an integrated work system to enhance the protection of society and property.

In detail, the authority stressed that the Ministry of Interior and police leaders proactively sent warnings and awareness instructions to the public in coordination with the concerned authorities to avoid potential damages that may arise from fluctuations in the weather situation, especially with the expectation of intensifying rain and winds, noting the continuation of national and local efforts to read the developments and respond to them. With the aim of ensuring the safety of everyone, noting that the work teams made great efforts to preserve lives and property, with the participation of more than 4,000 people from the civil defense of the Emirates in insurance, evacuation and rescue operations, as these qualified teams work with about 150 various mechanisms in the emirates of Sharjah, Fujairah and Ras Al Khaimah .

The official spokesman for the authority, Dr. Taher Brik Al Ameri, said, “The UAE was exposed to a weather condition that affected its various regions, and was accompanied by rains of different intensity, which affected many homes, services and roads. During the weather situation, the concerned authorities and teams in the emergency, crises and disaster system took all necessary measures to ensure the safety and health of everyone living on the country’s land.

Al Ameri added: “The concerned authorities have formed field work teams to deal immediately with any effects that may result from the weather situation, and to support the infrastructure system in the areas affected by it, as the emergency and crisis system in the UAE is characterized by its high readiness and flexibility, and always works according to a proactive strategy based on Forecasting all expected and unexpected scenarios with the aim of ensuring the readiness of everyone and harnessing all national capabilities.”

He continued, “We would like to reassure everyone that the national teams are working in full swing to provide maximum protection for residents in areas affected by the weather. We also affirm that the safety of lives is a top priority for all responding agencies in the national system for emergency, crisis and disaster management,” stressing that all concerned authorities in the emergency, crisis and disaster system have taken many proactive measures in preparation for the weather situation, including warning the concerned authorities, raising recommendations, and starting to educate and warn the public, under the supervision of From the National Authority for Emergency, Crisis and Disaster Management.

Al-Amiri indicated the coordination to provide equipment and water withdrawal tanks to the affected areas, as the authority follows up on developments in the weather and ensures the readiness of plans and strategies through its centers in the various emirates of the country, stressing that monitoring and follow-up operations are continuing around the clock to follow up on events and warn of any expected risks. All possible and safe solutions, in order to ensure the safety of society in all its categories.

He noted the role of national and local authorities working to contain the repercussions of the weather situation, through continued monitoring and tracking.

Al-Amiri also praised the efforts of the Ministry of Community Development, which took the initiative to shelter families affected by rain and torrential rain in the eastern regions, where the teams moved and secured the transfer of 150 people from the affected areas to hotel housing units, with continuous work to provide their needs after the transfer, in addition to coordinating with more than 20 facilities. Hotel, to provide 827 housing units with a capacity of more than 1,885 people in the emirates and regions of the country, pointing to the provision of buses belonging to the Ministry of Community Development, which contribute, in addition to the many means of transportation available in the affected areas, to speed up the transportation of families and ensure the safety of all its members. And provision of 56 buses ready in the event of any developments that require an increase in the number.

He said that the concerned authorities at the national and local levels continue to follow up and monitor the weather situation and its variables to ensure that appropriate preventive measures are taken.

The Ministry of Community Development also manages a number of registered, trained and qualified volunteers in the “National Volunteering Platform” to organize the transfer and service of affected families.

Al-Amiri added that “the volunteers work in three vital and important areas, including 40 volunteers to help transport the affected people by four-wheel drive vehicles, along with buses and vehicles provided by the concerned authorities to transport and secure families, and 60 volunteers to care and follow up on families after transferring them to hotel housing units, especially Families from the categories of senior citizens, children, and families who do not have a breadwinner or are in need of assistance during the emergency shelter period.

He called on the public to make the official authorities their first source for any information related to events that may occur in the future, in order to avoid any rumors or false information, in addition to everyone’s commitment to abide by the instructions issued by the competent authorities aimed at protecting them and ensuring their safety.

For his part, the official spokesman for the National Center of Meteorology, Dr. Muhammad Al-Abri, confirmed that the center is immediately informed of the developments in the weather through analyzing weather maps and data, following up on satellites and the network of radars deployed in the various emirates of the country, noting that the technical team of the center works around the clock. The hour is to monitor the weather and continue to issue the necessary reports and warnings, and send information and share it with the concerned authorities to take measures and precautions and coordinate between them, to deal with any possible effects on the country’s regions of this weather condition.

Al-Abri said that there was an extension of an upper and surface air depression from northern India through southern Pakistan towards the country, coinciding with the movement of the orbital convergence line towards the north of the Arabian Gulf, which worked on the flow of clouds from the Sea of ​​Oman towards the country, interspersed with cumulus rain clouds accompanied by lightning and thunder sometimes, pointing to The presence of the eastern mountains led to an increase in the development of convective clouds, which was accompanied by heavy rains in the east of the country, where the highest amount of rain was recorded in July over the past 30 years.

Al-Abri added: “It is expected that the depression will continue in the west of the country and will gradually weaken during the evening and night, with the continuation of the chances of some convective rain clouds forming over some eastern and western regions of the country,” stressing that the National Center of Meteorology is monitoring the weather situation around the clock. The center called on the public to follow the bulletins and reports issued by it and to follow the instructions and warnings of the competent authorities, pointing to the issuance of the first air report on the weather situation on the 23rd of this month, including its causes and possible effects in the country.

It also issued 20 warnings from the beginning of the situation, and 70 alerts on social media and various media. He stressed the communication with the concerned authorities to coordinate and deal with the antiquities quickly and professionally, as preserving the safety of people and property is a top priority. Any unwanted events, in addition to following up the news and information that it broadcasts on its electronic platforms and through social media, and making sure not to get carried away by any rumors circulating about weather conditions and to obtain information from its official sources.

The spokesperson for the Ministry of Interior, Brigadier Ali Al Tunaiji, confirmed that the police, rescue and ambulance teams are making continuous efforts to secure and protect individuals and property and ensure the smooth flow of traffic through field patrols. In the Emirate of Fujairah, referring to the work of the specialized police teams in coordination with the National Authority for Emergency, Crisis and Disaster Management to respond to any emergency as a result of torrential rains and floods in parts of the country, to ensure the safety of all.

Al Tunaiji stressed that the UAE society is capable of facing crises and disasters, pointing to working according to a national plan, especially natural disasters, and preparing and preparing for such an emergency security situation that the country was exposed to due to the torrential rains and the resulting damage to homes.

National teams are working to provide maximum protection for residents in areas affected by the weather.