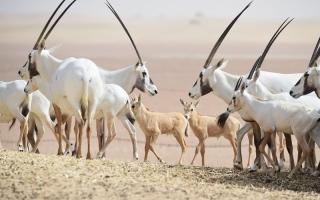 The UAE has unique environmental sites that include a group of natural reserves rich in biodiversity, amazing geological formations, rare animals and plants, in addition to coral reefs full of unique marine creatures, which made it a compass that guides the choices of lovers of tourist sites around the world, including its visitors. From within the country, especially in light of the spring weather that characterizes the UAE winter, and the exceptional programs and events witnessed by the most beautiful winter campaign in the world.

The UAE ranks first in the “Marine Nature Reserves” criterion in the “Environmental Sustainability Index”, which is a global indicator that measures the progress of countries in this field, in addition to the significant successes it has achieved in the field of preserving, propagating and releasing endangered species in their natural environments, to consolidate the UAE. Its position in the area of ​​interest and development of natural reserves, and its role in promoting ecotourism.

The natural reserves in the Emirates extend over an area of ​​more than 15.5 percent of the total area of ​​the country, to constitute one of the most important destinations for millions of local visitors and tourists from outside the country, throughout the year, especially during the third edition of the “The Most Beautiful Winter in the World” campaign, to enjoy the picturesque landscapes. wildlife, and many fun activities.

Al Wathba Wetland Reserve is considered one of the most famous wild reserves in the Emirate of Abu Dhabi, as it allows bird watchers and wildlife lovers to enjoy biodiversity, including many endangered species, which have taken refuge in this place to become a shelter for them and depend on it for their nutrition and reproduction.

This reserve is famous for the presence of a large number of large flamingos, known locally as the “Finter”, which is also known as the Great Flamingo, as thousands of birds live in this reserve during the fall and spring seasons, and a wide range of aquatic animals.

Abu Dhabi also includes marine reserves, which are Saadiyat, Ras Ghanada, Pulasayaf, Eastern Mangroves, and Al Yasat, in addition to the Marawah Reserve, which is the first biosphere reserve in the UAE, and it is home to more than 60% of the sea cows “dugong” in the country’s waters, and it is also a site Good for spotting bottlenose dolphins, humpbacks and seabirds.

The Ras Al Khor Wildlife Sanctuary in Dubai is witnessing a distinguished turnout from the public, especially during the winter period that coincides with the season of bird migration in the world, as the reserve hosts approximately 450 species of animals and approximately 47 species of plants.

The atmosphere of the reserve enriches the curiosity of those who love exploration, as it embraces a different style and biological diversity that combines various types of birds and living organisms that include crustaceans, fish, invertebrates and small mammals.

The Emirate of Sharjah is rich in its distinctive biodiversity, as a result of the diversity of its marine, terrestrial and mountainous habitats, in addition to its wetlands. Shanouf, Wadi Qara, and Wadi Al-Helw, in addition to two marine reserves, namely the Al-Qurm and Al-Hafiyah protected areas, and the Sir Bu Nair island reserve.

The Sir Bu Nair Island Reserve is famous for offering the opportunity to discover unique landmarks on land and in the sea, and is a safe haven for a variety of endangered species, such as hawksbill turtles and rare green sea turtles that come to the island’s beaches to lay eggs between March and June of each year.

Interestingly, the presence of red coat fish was discovered on the island, which had not been detected in the Gulf waters before.

In the Emirate of Ajman, the “Zawra Reserve” stands out, which witnessed the launch of the third edition of the “The Most Beautiful Winter in the World” campaign. The reserve is characterized by mangrove forests of a charming nature on an area of ​​​​one million square meters and inhabited by many land and sea species, and is home to more than 100 species of birds. Domestic and migratory, including pink flamingos that can be seen all year round as well as herons or egrets.

This nature reserve provides an ideal environment for many exciting water activities such as kayaking among the mangrove-lined bays and narrow lanes.

Within the picturesque Hajar Mountains range in the Emirate of Fujairah, lies the Wadi Al Wurayah National Reserve, which is characterized by its charming beauty, and is full of unique biodiversity and amazing geological formations, from rocky slopes, rivers and wonderful rock formations.

The reserve includes an amazing natural diversity that includes hundreds of species of animals and plants, and the local orchid flower is found in it. It is also the first mountain reserve and is home to the Blandford UKTN, the Arabian wild cat, the hedgehog, the lynx, and others.

Umm Al Quwain.. a destination for lovers of tranquility

Al Seniya Island in Umm Al Quwain is considered a natural reserve and a suitable tourist destination for lovers of tranquility in the bosom of nature, as it is rich in many types of birds such as flamingos, animals, natural plants and trees, the most famous of which are the various mangroves.

The historical environment of Al Siniyah Island includes a number of the most important archaeological and tourist sites in the emirate. Recently, the Christian Monastery and Church were announced on Al Seniyah Island, which is a living record of the various multicultural societies that settled on the island over the past centuries.

Ras al-Khaimah.. the habitat of flamingos and eagle fish

The Khor Al-Muzahmi Marine Reserve in the Emirate of Ras Al-Khaimah is home to many species of high environmental importance, including the flamingo and the fish eagle, in addition to the fact that the reserve is one of the nesting and feeding areas for threatened green turtles.

The Khor Al-Muzahmi Reserve is characterized as an incubator environment for many commercial fish that shelter in the reserve’s environment, before moving to the fish stock.