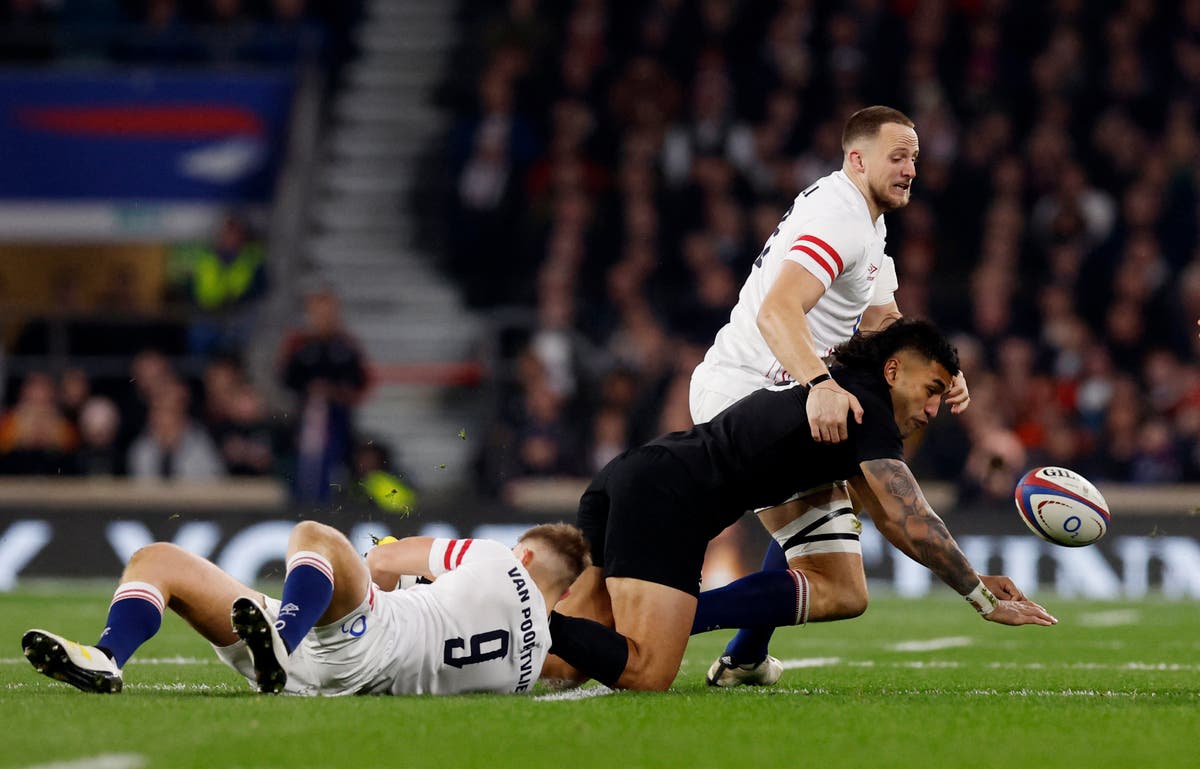 England and New Zealand take on Twickenham in one of international rugby’s most glamorous matches, with a pair of players becoming Test centurions.

England captain Owen Farrell and All Blacks Lock Brodie Retallick will reach triple figures in international caps won when the sides meet in a thrilling international match in the autumn.

They haven’t met since a memorable semi-final at the 2019 Rugby World Cup, arguably the pinnacle of the Eddie Jones era, when England completely outclassed their opponents to take a 19-7 victory and clinch their spot in the book final.

With the next World Cup on the horizon, both the hosts and Ian Foster’s All Blacks will be looking to set a milestone at Rugby HQ and the win would go a long way in saving an up and down autumn for Jones and co.

Follow the latest action from the autumn international between England and the All Blacks below:

New Zealand are taking it easy, taking their time for a few midfield rucks as their playmakers weigh their options. It’s a high hoist again, from Beauden Barrett’s boot towards brother Jordie.

The ball tumbles free from tangled hands white and black, but Mathieu Raynal brings the players back – Aaron Smith advanced from an offside position and it becomes a penalty for England.

Rieko Ioane has beaten his own score! It’s pretty obvious in the replay, the center around the neck of Owen Farrell on a right side ruck after Mark Telea was felled really, really well by Manu Tuilagi.

New Zealand on the attack again! The ball is clearly out as Jack van Poortvliet dallies at base, and Ardie Savea sternly examines the scrum half’s lower vertebrae and forces him free.

Room for the All Blacks – Rieko Ioane crashes! But has there been a neck roll in the build-up?…

Again New Zealand looks to the sky, Caleb Clarke again the target with Jordie Barrett this time the delivery man. England, however, adapted the rather exalted Freddie Steward there to defuse Barrett’s bomb. England lineout 15 yards from their own line.

A jumping Jonny May causes the New Zealand kick to miss the ball, but Richie Mo’unga makes amends after Codie Taylor gets a penalty on a midfield slump.

Can England break through this All Blacks defence? It is now schooled by Jason Ryan, whose Crusaders have proven so effective in countering the urge over the years.

They can not! A problem with the set-up, with lifters for the jumper when he hits the ground and a penalty for New Zealand.

England comes to life for the first time in this match. Manu Tuilagi and Ellis Genge carry with typical fury, with Jonny May almost slipping away from Mark Telea as well. Kyle Sinckler fumbles twice on purpose.

New Zealand is offside. Penalty kick for England, and a choice to be made – it’s eminently kickable, but 100-capper Owen Farrell will send his forwards to the corner.

New Zealand clearly identified something in the England wing defence, Jack Nowell again took aim with a cross. This time the Exeter wing does a little better, hitting Caleb Clarke as he lands and bringing him into contact.

A rumbling black mass and Codie Taylor is over!

Muscled and beefy from New Zealand, driving right through England’s maul defence. Scott Barrett barks orders like the periscope in the middle of it, roaring with joy as Codie Taylor just manages to get the ball down.

Jordie Barrrett hits his conversion through the uprights from a left-of-centre position – New Zealand’s start gets even better.

Penalty for New Zealand. Kyle Sinckler is supposed to depend on the stakes of the first scrum.

The All Blacks go to the corner.

The strike by the nurses cancels 15,000 surgeries