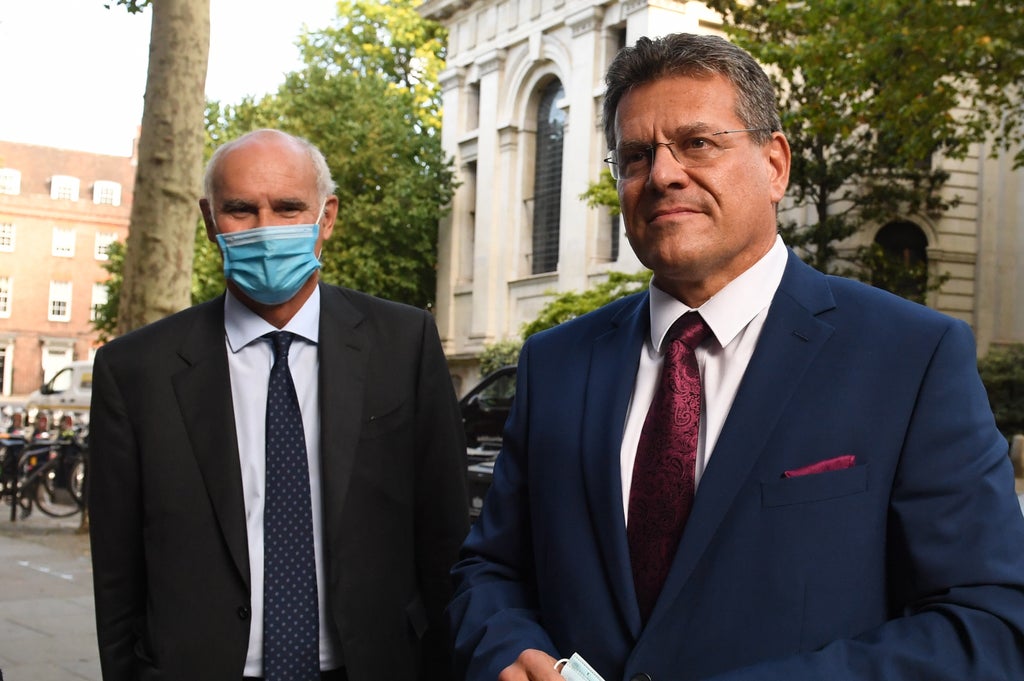 In an interview with the Evening Standard, Joao Vale de Almeida hit back at Health Secretary Sajid Javid, who earlier insisted “that there should be no role for the ECJ in any part of the UK. .. and that includes Northern Ireland “.

The Ambassador said: “For us it is not even a red line, it is an impossibility to have at the same time the benefit of the access to the single market of goods for Northern Ireland… and to the UK market. No other territory in the world can claim this opportunity.

“If you want to have access, like Northern Ireland, to the single market for goods whose rules you have to obey, you obey the rules. Any conflict that exists in the single market can go all the way to the European Court of Justice… so one goes hand in hand with the other. “

The standoff over the European court comes as British and EU officials on Thursday began preliminary talks on a compromise over the controversial Northern Ireland protocol, which avoids a hard border with Ireland by keeping the region both in the EU single market and in Britain’s own commerce. zoned.

But the deal creates a trade border in the Irish Sea, resulting in costly and time-consuming checks on goods flowing from Britain to Northern Ireland and exacerbating tensions between trade unionists in the region. On Wednesday, European Commission Vice-President Maros Sefcovic announced a series of proposals to ease 80% of those controls and remove blockages on the import of chilled meats and medicines.

However, Britain’s demand to end the role of the ECJ in the Protocol and install a new independent arbitrator to rule on trade disputes remains a major stumbling block.

Speaking on Sky News, Mr Javid said the UK’s aggressive approach to the talks would continue, insisting Brexit Minister Lord David Frost made it clear in a speech on the protocol in Lisbon on Tuesday that “one of the most important issues is to end the role of the ECJ in Northern Ireland”.

While Mr. Vale de Almeida suggested that there might be room for other “mechanisms” to settle trade disputes, he added: “Ultimately, if there is a conflict, if there is a court must say the last word on the interpretation of European law, it is the European Court of Justice. “

Despite the disagreement over the ECJ, Mr Vale de Almeida told the Standard he was more “a glass half full than half empty” on the prospect of a resolution and insisted that the proposals of the Commission were an important step.

“What we put in place yesterday was a package of solutions resulting from the impact of Brexit on Northern Ireland,” he said. “It goes very far within the limits of the Protocol and within the limits of European law. Let’s see how far we can go with our British friends and we have invited them for talks in Brussels as soon as they are ready. Let’s focus on the possible and there are a lot of things that are possible.

But he made it clear that there was no appetite in Brussels to completely renegotiate the protocol. “If you signed a contract a few months ago, a few years ago after very long negotiations during which the other party did not come up with a credible alternative to what was agreed… ink n isn’t even dry in this deal and now you wait to renegotiate the whole concept? No.”

Mr Vale de Almeida said: “I cannot hide that in our capitals people sometimes feel impatient with what they see as a constant desire to come back to issues that we thought had been agreed upon. There is from time to time the feeling that there may be a temptation on the British side to revisit issues which we thought have been settled. “

“But we have to be pragmatic and what we have on the table today is a great opportunity for the UK government and Northern Ireland to seize and if we move forward we can see the light at the end of the day. tunnel… Let’s move on. “