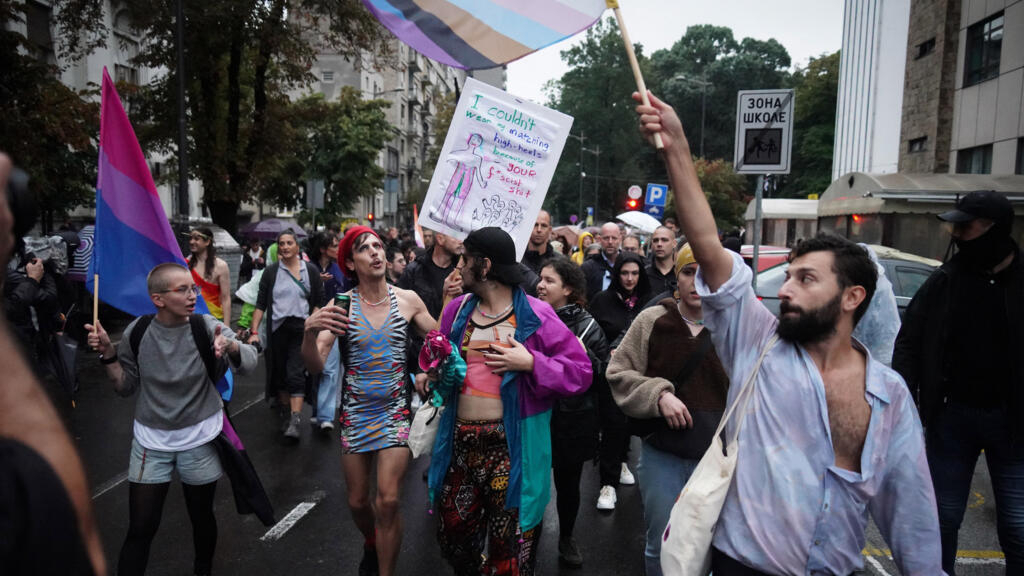 Police detained 64 people in Belgrade on Saturday as LGBTQ activists gathered for a EuroPride march, despite a government ban.

The event was intended to be the cornerstone event of the EuroPride meeting. But the interior ministry banned the march earlier this week, citing security concerns after right-wing groups threatened to protest.

Despite the official ban, protesters were able to march in the rain a few hundred meters from the Constitutional Court to a nearby park, a much shorter route than organizers had originally planned.

Serbian Interior Minister Aleksandar Vulin insisted that the ban be enforced and that the people were merely “accompanied to a concert”.

Local media reported that clashes broke out outside the event and that a group of hooligans threw flares at the police.

The prime minister of the Balkan country, Ana Brnabic, who is openly gay, said 64 people were arrested and ten police officers injured on Saturday, but stressed she was “proud” that the day ended with “no major incidents”.

Same-sex marriage is not legally recognized in Serbia, where homophobia remains entrenched despite some progress over the years in reducing discrimination.

“This is much bigger than a gay pride,” Luka Mazzanti Jovicevic, a Serbian participant, told UKTN.

“We are fighting for the future of the country.”

Model and activist Yasmin Benoit said she’s been to many gay pride parades “but this one is a little more stressful than the others”.

“I’m from the UK where everyone is more supportive and it’s more commercial,” she told UKTN.

“But here, this is really what Pride should be… standing up to the forces that want to stop us.”

There was a heavy police presence around the Pride rally, with officers pushing back the small groups of counter-protesters brandishing crosses and religious insignia.

“I am here to preserve the Serbian traditions, faith and culture being destroyed by sodomites,” Andrej Bakic, 36, a counter-protester in a group surrounded by riot police, told UKTN on Saturday.

The Balkan country, a candidate for EU membership, was under heavy international pressure to allow the march.

More than 20 embassies – including the US, France and Britain – have issued a joint statement urging authorities to lift the ban.

“We, as activists, will exercise our democratic right to civil disobedience and protest,” Belgrade Pride organizers said on Saturday, after a court rejected their appeal to overturn the ban.

The Interior Ministry had also barred all counter-protests, but some far-right groups gathered in front of several churches in Belgrade.

Interior Minister Aleksandar Vulin warned in a statement that “we will not tolerate violence on the streets of Belgrade, nor illegal marches”.

The US embassy urged its citizens to avoid the event “because of the potential for unruly crowds, violence and possible fines”.

Human rights organizations and the European Union have called on the Serbian government to withdraw the ban.

“The Serbian government’s decision to cancel EuroPride is an outrageous surrender to and implicit punishment of bigotry and threats of unlawful violence,” said Graeme Reid, director of the LGBT rights program at Human Rights Watch.

At least 15 Members of the European Parliament took part in the Pride march in solidarity.

Belgrade Pride marches in 2001 and again in 2010 were marred by violence and rioting after far-right groups attacked the event.

Since 2014, the parade has been held regularly without significant turmoil, but has been protected with a large presence of law enforcement officers.

The formal ban came just days after thousands took part in an anti-Pride demonstration in Belgrade, during which biker gangs, Orthodox priests and far-right nationalists demanded that the EuroPride rally be scrapped.