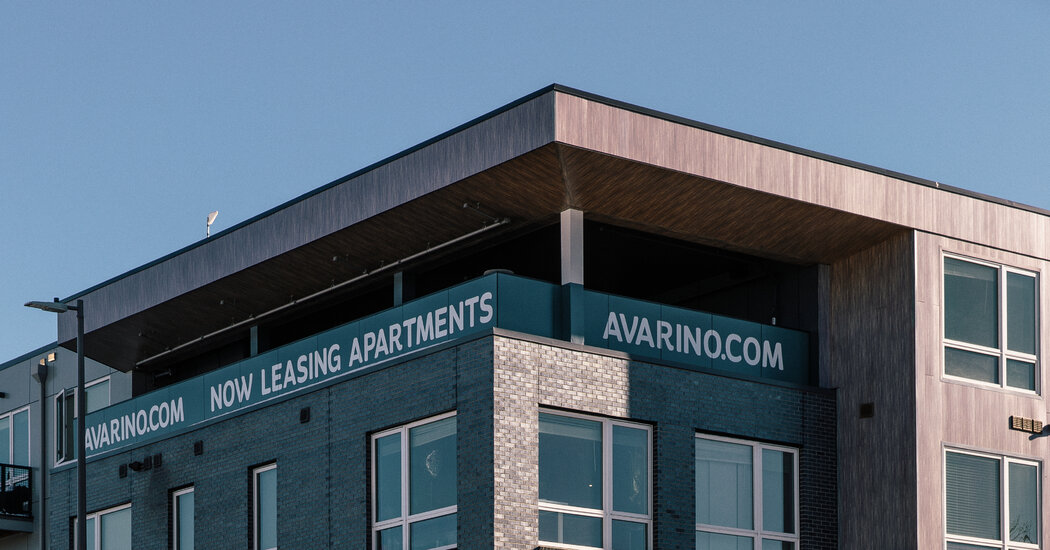 To the untrained eye, The Times’ Real Estate desk covers homes. However, for regular readers of the section, it deals with complex issues such as race, personal finance, local and national politics, and others that ultimately converge on the subject of housing.

In September, Times Real Estate reporter Anna Kodé began reporting for an article on two particularly complicated issues: the housing crisis and strict local planning regulations, which have led to a housing style characterized by its square shape and colorful panels. This style of “anytown architecture,” she writes, has taken root in major cities in the United States and is spreading rapidly. “There are also usually the same kind of shops around them, such as a brewery or café,” Ms. Kodé said. “And it just all looks the same.”

To better understand the forces behind the proliferation of these developments, Ms. Kodé traveled to Nashville, Denver and Seattle and spoke with architects, residents and housing experts. In her article, published online Friday and appearing this weekend in the Real Estate section, she posed the question: Does charm really matter in a housing crisis?

In an interview, Ms. Kodé explained how she approached her reporting. Her responses have been edited and condensed.

What gave you the idea for this story?

Over the summer, my editor at the time, Esha Ray, showed me examples of these square, colorful buildings. We started sending each other pictures every time we saw something like this. She lives in New Jersey, so every time she saw it in New Jersey, she sent me a picture. I had to go to Hudson, NY, for a story, and on the Amtrak train there I saw a development that looked like this and I sent it to her. It was very informal. Then we were like, okay, let’s make it into a story and try to answer why it’s happening. It started with many calls to people who study architecture and urban planning to see what reasons they identified and if this has even entered their world. Of course, they were all aware of it and they all studied why this happens and what are the recurring features.

We chose three cities. We wanted geographic diversity, so we’ve spread Nashville, Denver and Seattle across the country — cities that are also known for their many young transplants, people who come there and need housing and may see no choice but to live in this kind of buildings.

The digital headline “America, the Bland” is in bold. What do you expect readers to think when they first read that?

I think it will definitely upset some people, which I feel a little guilty about. But that’s the story I’m telling. That’s what the news eventually turned out to be. Many people are concerned about the proliferation of this architecture. And my story goes into that a little bit more about why that’s happening, why it might not be the worst thing and why it’s not the first time this has happened.

See also  In Ukraine, power plant workers are fighting to save their 'child'

The whole story essentially boils down to the issue of prioritizing aesthetics versus trying to handle the housing crisis. I wonder, after coverage, where you fall on that spectrum now.

I think one of the surprising things that came out of this story for me was to find out how many people defend these building types. I thought I should scream for people like that. But a lot of people deeper in this world, like scientists, realize that this happens because of how hard it is to build houses, that developers and architects kind of came up with this formula, all the problems that they’re going to run into, and this just happens to be the fastest way to build a building, and most cost effective. And of course it is more nuanced than that. But I will say it opened my eyes to how this type of housing is a positive force.

Was there a point in your coverage when a source took your story in a direction you didn’t expect?

The woman at the end of my story, Rosalie Holder, lives in an affordable housing complex in Nashville. I really tried to talk to her about what the building looked like because that’s what the story was focused on. But it wasn’t even a consideration for her. Every time I tried to ask something like, “What do you think of the colors?” she just didn’t think about it. She said it’s safe, it’s quiet, it’s peaceful. And it took me a minute to realize it’s because it doesn’t matter what it looks like to her; it matters that it is new and safe and comfortable and affordable. And I think that’s the reality of these buildings.

Do you think we will be nostalgic about this architectural style?

For me and for a lot of people, I think it’s hard to believe that we’re going to be nostalgic for this. But as I say in my story, history certainly suggests that we will be nostalgic for it. I think if you told someone who grew up in the 50’s that we love dingbat apartments now they would think we were crazy. Same as when brownstones were first built, people hated them. They said the same things about them as we do about these buildings today. And now we like brownstones, so we might like this one too.