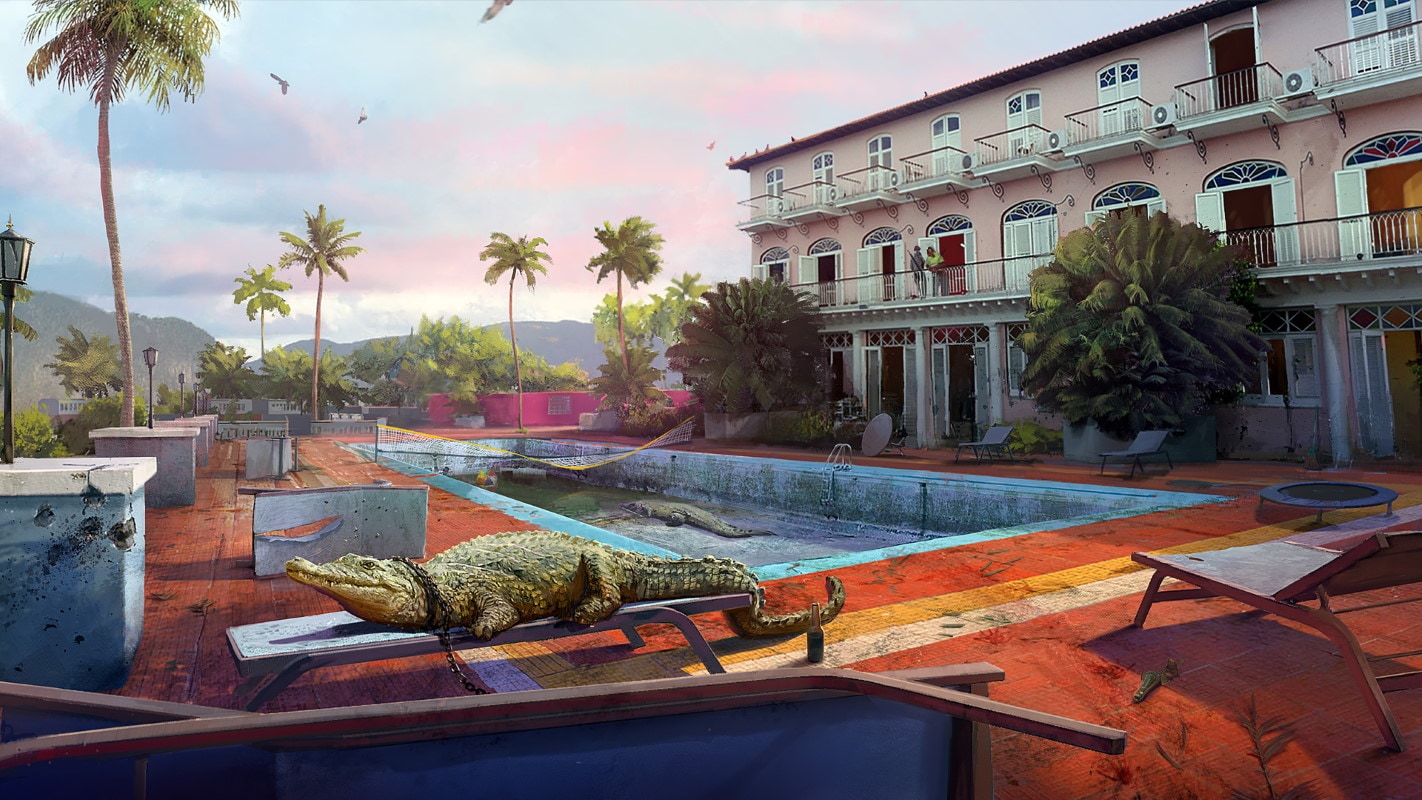 Far Cry 6 – released October 7 worldwide – takes place on the fictional Caribbean island of Yara, ruled with an iron fist by dictator Antón Castillo (Giancarlo Esposito). Life is tough, with many Yarans escaping for a better life. Yara is a place frozen in time, thanks to Castillo’s policies that have isolated him from the rest of the world. Having lost his father in a revolution 60 years ago, Castillo grew up believing his country had been stolen from him. As an adult, he rode a populist wave to power, romanticizing the pre-revolution Yara. Seems familiar? It’s in the title.

“It’s heavily based in Cuba,” Far Cry 6 writer and actor Manuel Rodriguez-Saenz said last week. “In terms of culture, music, way of speaking, games – there are dominoes, there are baseball – and there are palm trees. And of course that aspect of a Caribbean island, frozen in time, with old cars from the 1950s. There’s only one, right? There aren’t many examples we can use.

Ubisoft Toronto’s Far Cry 6 accents are again heavily based in Cuba, with variations based on socio-economic status, whether it’s a rural area or the capital city Esperanza taking a bit further. Havana. Even inside the capital itself, a working-class Yaran will sound different than someone from the upper-middle class, Rodriguez-Saenz noted.

Far Cry 6 is more than Cuba

“Cuba has been a huge inspiration from the start and I think it has evolved over time,” said Navid Khavari, narrative director of Far Cry 6. “We spent a lot of time researching revolutions. throughout history. Moreover, we were not limited to the Cuban revolution. We were looking at what is happening now in Venezuela, Colombia, the Arab Spring.

“Tonally, we watched a lot of documentaries about the revolution,” Khavari added later. “Style-wise, we wanted it to look almost like a newsreel at times, putting you right into the action. But elsewhere, I naturally rely on [Quentin] Tarantino and folks like that to keep some of the fun of Far Cry going. “

“It’s heavily based on Cuba, but it’s not Cuba,” Rodriguez-Saenz added. “You will find differences in terms of gender, there are no flamingos in Cuba. And there are flamingos in Far Cry 6. There are people who grow like alligators in a swimming pool. really don’t do that in Cuba, so these are things that I think we need to make sure it’s clear to everyone, it’s not Cuba.

The same goes for the religious elements of Far Cry 6. Rodriguez-Saenz noted that the team borrowed real symbols and gods from African and Caribbean roots, but it is a completely fictional religion. Ubisoft Toronto has taken a similar blended approach to building Yara’s past, looking to the Caribbean, Latin America and South America, said global director Benjamin Hall.

“Working with the narrative team, we created a complete timeline looking back a bit like the 1400s,” Hall added. “To really give birth to the island from its beginnings, then tap into those real story elements that were that part of the world, but then create our own stories in Yara. So when we got to world building , we were also able to tap into those layers of history for our stories. ”

Far Cry 6 is part of the Solver philosophy of Cuba

Cuban influences also permeate the gameplay of Far Cry 6. Primarily, the Cuban concept of “solver” – pronounced “rreh-sohl-BEHR” – which means doing with what you have. In Cuba, this was caused due to trade embargoes and the collapse of the Soviet Union, forcing Cubans to survive in scarcity. Resolver is a lot like DIY, except it brings tenacity, improvisation, and resourcefulness.

“Resolver is really a tradition of approaching life in Cuba, that’s what I’ve been through,” said Far Cry 6 actor Alex Fernandez, who plays guerrilla mentor Juan Cortez. “There are examples all over Cuba of people saying, you know, ‘I have this car, it’s 1955, I don’t have gasoline so I’m going to figure out how to dilute that paint in fuel. In the island of Cuba, and in Far Cry 6’s game on Yara, the solver truly means a triumph of the imagination.

On Far Cry 6, resolving weapons are unlike anything you’ve seen, crafted from a variety of sources such as drills, paint cans, bike grips, a turbocharger, battery packs. car, a motorcycle engine, gas pump handles and – in what is my personal favorite – CD players.

“I think the real difference factor is you see all the mechanics and parts working together, and it feels so ingrained and real,” Khavari said. “It’s handmade and organic.”

And then there are the resolver backpacks – nicknamed Supremos. Some are like a flamethrower. Some have a fire extinguisher filled with kerosene, your own personal mini-jetpack. And some have a bunch of metal tubes with auto-targeting missiles. These super-powerful Supremos are time limited and therefore have a cooldown, ensuring you don’t keep using them every few seconds.

See also  Battlegrounds Mobile India: You may lose your account if you do THIS - Check out the guidelines issued by Krafton

“In Far Cry 6, the solver is all about turning the player into a single guerrilla army and inflicting maximum chaos with what they have,” said Far Cry 6 chief game designer David Grivel.

Speaking of guerrilla warfare, Far Cry 6 finds you in the shoes of Dani Rajos (Sean Rey / Nisa Gunduz who spent two years with the character), a local Yaran who just wants to get away from it all. But after witnessing a horrific crime, Dani is prompted to lead a guerrilla war against Castillo.

“With Far Cry, it’s always a story of rebellion, it’s kind of a part of the mark,” Khavari noted. “But what really excited us is the shift from rebellion to the idea of ​​revolution because it’s radical, it’s epic. It’s about liberating an entire country, but at the same time, there is a kind of ideology behind the guerrillas fighting a revolution. An ideology that is very goal-oriented is personal. To do a character-driven narrative that pushes those notions and the intensity of going through a revolution felt really powerful. “

Ubisoft Toronto traveled to Cuba to experience the culture and speak with former guerrillas and their descendants. Fernandez’s father fought the Fidel Castro regime in Cuba and spent time in prison, the Far Cry 6 actor said: “When I was first chosen, I said to Navid: ‘I’m just going to play my dad.’ My dad had a scorched earth policy when it came to a lot of things. And so, I felt really good with Juan Cortez. Cortez literally wrote the book on how to be a guerrilla warrior. If you find the thing [in Far Cry 6], there is a set of rules.

As a guerrilla, you cannot openly walk around Far Cry 6. Castillo not only has military checkpoints on all major roads, but he also controls the skies (with anti-aircraft guns) and seas ( with naval patrols). If you want to avoid constant conflict, you had better avoid the beaten path.

Horses are back in Far Cry 6
Photo credit: Ubisoft

“This is where the notion of guerrilla lanes arose,” Hall said. “These paths woven through the landscapes allow the guerrillas to move invisibly across the country without the threat of the military controlling the roads. “

“These are little paths hidden in the jungle that allow you to navigate the open world safely,” said Far Cry 6 game content director Omar Bouali. “They can also help you ambush the military. You can find a lot of things in the guerrilla paths like weapons or pieces of equipment that will help you survive. And yes, Far Cry 6 brings back the horse which is cool to use in the guerrilla paths because it helps you go really fast.

Far Cry 6 is a political game

Considering Far Cry 5’s failures in handling political material and Ubisoft’s muted response, many are understandably concerned if Far Cry 6 sets foot in a quagmire. On the surface, Ubisoft seems to be handling it better this time around. Khavari anticipated the questioning, publicly acknowledging that Far Cry 6 is a political game. Although he will reserve his judgment for the fans.

“What was important was not to think too much about what we can and cannot say in the story, but rather the story we are trying to tell and trying to be fearless in it. “said Khavari. “One of the main things that I sort of tried to make, with the statement I released a few months ago and now, is that we tend to see revolutions and any conflict is black and white. As one side is right, one side is wrong. But these are incredibly complicated conflicts, and anyone who studies revolution will tell you that.

“So rather than trying to tell a simple story with a very binary point of view, we accept that complexity. The beauty of telling a story about the revolution is that you see it in a revolutionary group. There are all kinds of motivations, ideologies, perspectives that you can capture. We didn’t want to hesitate to talk about the rise of fascism both around this time and what we have seen over the last 5-10 years around the world.

“We wanted to talk about the effects of imperialism on an island like Yara, and for the inhabitants of the island to have an opinion on the effects of a blockade on an island like Yara. And we wanted to talk about LGBTQ + rights in the context of our stories. So, these were all incredibly important topics that we just didn’t feel able to avoid. At the end of the day, the players will decide for themselves how we did it, and I encourage them to share their own opinion. “

Among us on consoles, Xbox Game Pass in December