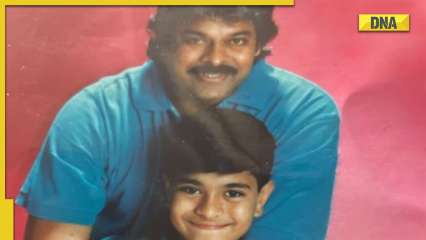 On Father’s Day, Ram Charan shared an adorable throwback photo with Chiranjeevi on Twitter. The RRR star looks extremely cute in the photo which is going viral on social media.

In no time, netizens started reacting to the photo of Ram Charan and Chiranjeevi. One wrote: “Lovely father and son duo Anna”. The second mentioned, “Truly father is a real hero in the whole world, respect your father.” The third person commented, “two megastars.” The fourth commented, “Mister is younger today, megastar.”

Taking to his Instagram reels on Saturday, Upasana posted a video where Upasana and Ram Charan can be seen having a good time with their close friends. There are lots of photos in the video where she is walking down a road, posing with her friends with a stone in her hand. It also showed Ram playing with a dog and later walking it as a group of people followed him.

Ram and Upasana were also seen laughing, posing for photos and walking around holding hands. Upasana was also seen celebrating the holiday with firecrackers and also previewed their custom menu.

In one of the photos, Ram was seen holding a microphone near his better half as she smiled. Sharing the post, she wrote, “Moments, lessons and relationships to cherish forever. As we celebrated 10 years together, the most traumatic news of the loss of an extremely dear friend hit us. We were truly blessed to be surrounded by warm and caring caring people to help us cope. Privileged to have so many safe spaces. Thank you for making our anniversary so special. Thankful and thankful. Many love..official @sudha_r @swathi.fineart#ur10As soon as she shared the post, netizens bombarded the comment sections with their lovely comments.

Earlier, Upasana shared a few photos on her Instagram handle where the lovebirds form a royal couple to make their day more special. Ram Charan and Upasana got married on June 14, 2012, after dating for several years. (With ANI entries)

Dia Mirza Opens Up About Sex Before Marriage, Says It’s A ‘Personal Choice’