Fight racial rhetoric and violence by stepping up, without standing up 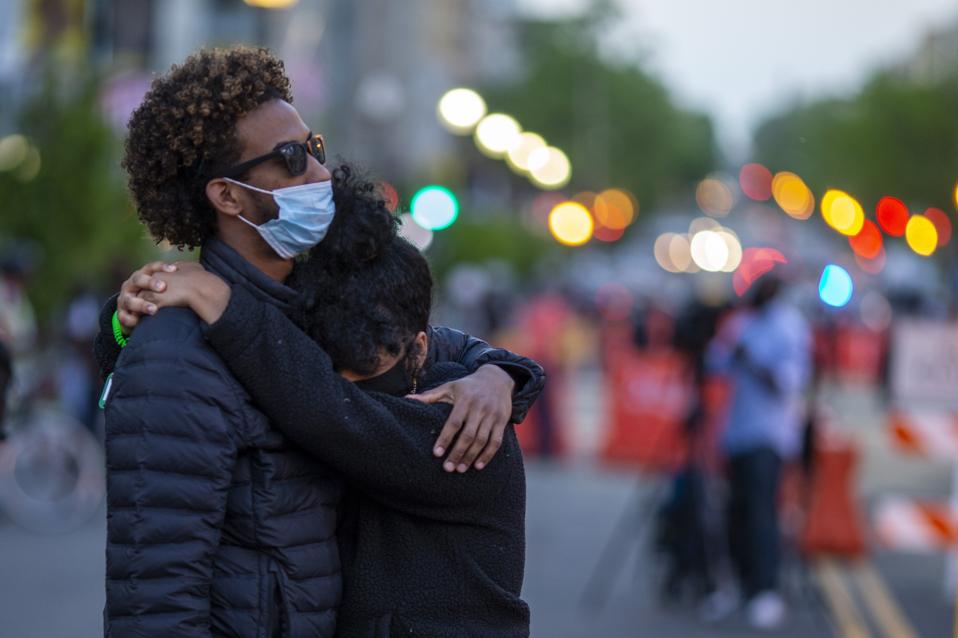 Yesterday’s “guilty” verdict for George Floyd’s assassin was a historic victory for justice in the face of centuries of racial violence against blacks in America. And as we celebrate this moment as a major event in bending the arc of history towards justice, we must recognize that it is too early for unbridled optimism. There is enormous work to be done to achieve racial justice and reconciliation in this country, and everyone has a role to play in this work.

The verdict in Derek Chauvin’s trial capped two weeks of heart-wrenching reruns of George Floyd’s murder, coupled in the media with gruesome police gunfire on 20-year-old Daunte Wright, arrested for a traffic violation and shot in his car only 10 miles from where George Floyd was killed; young Adam Toledo, only 13 years old, shot dead while standing in front of the police, his arms raised above his head; and, just as the verdict came, 16-year-old Ma’Khia Bryant, who was shot dead by police who had been called for help. And these murders echo those of Breonna Taylor, Ahmaud Arbery, Tony McDade, as well as so many others who, like Kawaski Trawick, were killed without outside witnesses.

These events, evidence of continued racial violence by police against unarmed young black men and women, are set against a backdrop of relentless racial violence against many communities in our society. Just over a month ago, on March 18, we learned the tragic news that eight men and women – including six of Asian descent – were murdered in Atlanta. But this news was quickly eclipsed by that of Vilma Kari, a 65-year-old Filipino-American on her way to her church, who was brutally attacked on a downtown Manhattan street in broad daylight as passers-by watched without intervening. . Since hate crimes are vastly underreported, we cannot know how many more have been victims whose stories did not make the headlines. But the best available evidence indicates that rates of violence against Asian Americans and Pacific Islanders skyrocketed after March 2020, when national leaders engaged in dehumanizing and xenophobic rhetoric accusing Asians of the pandemic. COVID-19, causing a 149% increase in anti-Asian hate crimes. between 2019 and 2020.

Hate speech, discrimination and violence are also implacable realities for black, Latin American, Native American and LGBQT people living in America, as well as for Muslims, Jews and members of other minority religions. Research shows that derogatory rhetoric can measurably increase our biases, as it creates a false “tampering” of people that promotes racism. However, this type of hatred is learned behavior and, as such, can be combated through education. Within and beyond the classroom, each of us has a sphere of influence to help change the culture of fear, hate and violence in which we are currently immersed.

It was because Darnella Frazier indulged in the courageous act of recording the murder of George Floyd that the nation was pushed into action and a guilty verdict was ultimately delivered. It was because an anonymous Good Samaritan distracted the attacker from Vilma Kari, yelling at the attacker across the street, that the beating ended as the attacker chased after the Samaritan. It was because so many people took to the streets to protest police shootings and other racial violence that the media took notice and many members of the public were informed and inspired to join the protests and make protests. donations to judicial organizations. It is because organizations like the NAACP Legal Defense Fund, the Southern Poverty Law Center, the Anti-Defamation League and the ACLU have reported, registered and litigated these cases that the justice system has been pressured to act. It is because local and state policymakers have acted that the police evolve and school curricula begin to address issues of racial oppression. And it is because so many teachers have helped students learn and address social justice issues in their classrooms that new possibilities for overcoming bigotry are emerging every day.

We all have the capacity to learn and teach the sources of intolerance, the experiences of those who are objectified and vilified as “others”, and to help build critical mass to counter the narrative of. hatred. Collectively, we are influencing to change the structures and policies that hold oppression in place in our school systems and in our society more broadly. Our power to dismantle oppression in all its forms and advance a more racially just future begins with our own willingness to learn and understand, and continues with how we share with our knowledge, how we teach, invest, let’s vote, walk, buy, communicate. and live our daily life.

As we work to change the narrative that has sparked violence against so many, it is important to tackle the institutionalized racism that has derailed and destroyed so many lives and permeates the systems of education, housing, justice. and police of our country. As Minnesota Gov. and former teacher Tim Walz noted after yesterday’s verdict, “Courtroom accountability is only the first step. We need to rebuild, restore and rethink the relationship between law enforcement and the communities they serve. We need to tackle racial inequalities in all corners of society – from health to home ownership to education. We must come together around our common humanity. “

By deepening our understanding of this story and its continuing impact, and by taking action, we can create a fairer and more inclusive society for all. Below are some resources that all of us – teachers, parents and friends – can use to fight racism, hatred and violence. By speaking out and standing by, we can create a society in which every person is valued, safe, and finally able to achieve the American dream of life, freedom, and the pursuit of happiness in a way that allow everyone to continue in this direction. dream.

Share my lesson: Teaching for racial equity and justice

Mini Lesson: The Pyramid of Hate

An online module to facilitate conversations about anti-bias, anti-bullying and hate.

Center for Racial Justice in Education

Resources for talking about race, racism and racial violence with children

A wide range of resources for teachers, librarians, parents and more.

Talking about racism and violence

Resources for educators and families.

Resources for educators focused on anti-racism learning and teaching

Face history and ourselves

Curriculum and educational resources to combat historical and current oppression as well as ways to combat hatred and prejudice.

A facilitation guide for using restorative circles and opening a dialogue on the causes of anti-Asian racism.

After Atlanta: Teaching the Identity and History of Asian Americans

An article on the author’s conversations with students the day after the Atlanta bombings, as well as recommended resources for teaching the history and identity of Asian Americans.

A resource to teach this moment from a historical perspective.

How to intervene if someone is being harassed

Video and tips on what to do if you witness public cases of interpersonal violence or racist or oppressive harassment.

How to respond to racism linked to the coronavirus

“Speak Up” strategies for responding to racist or xenophobic comments about the coronavirus or anything else centered on four strategies: “Interrupt”, “question”, “educate” and “echo”.

Six steps to expressing yourself

A short and accessible guide to tackling racist thought and speech among acquaintances.

A guide outlining 10 principles for fighting hate in your community.